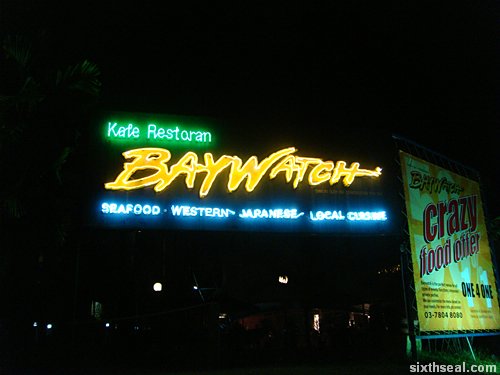 My girlfriend turned 24 on the 3rd of December 2008 – I know this post is late, but her birthday present was the trip to Cameron Highlands (Koh Samui was my first choice but the tickets were all sold out). Anyway, we made reservations at MO for 7 pm but unfortunately, I left the office too late due to work and managed to get stuck in a jam so she told me to just go someplace nearby and splurge on the Cameron Highlands trip instead (which we did, much to the dismay of my credit card). 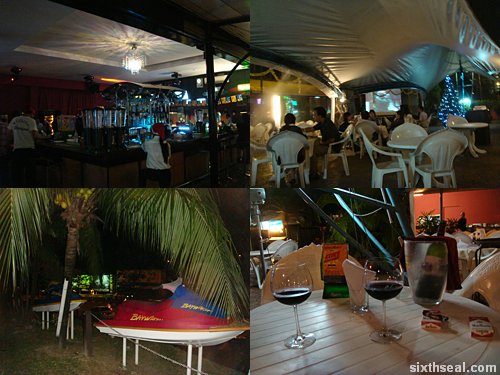 Baywatch has an al fresco dining area in addition to their smoke infused bar area (also known as the “interior seating”). Despite being in a relationship with a smoker, she still can’t stand excessive nicotine and tar emissions so we sat outside. Baywatch is also heavily inspired by the sitcom of the same name and comes complete with props like jet skis. They have a wine promo going at RM 128.00++ with half a dozen oysters and Two Oceans Shiraz 2005, which we opted for. 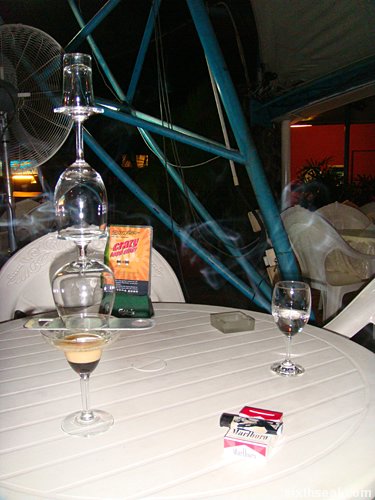 It is customary where we come from to have a Flaming Lamborghini (RM 38) for the birthday girl/boy. I have no idea where this tradition came from but I have a strong suspicion it’s correlated to the flashy presentation of the Flaming Lambo.

She couldn’t finish it though and got me to drink with her. The tables at Baywatch is a little bit rickety and the setup of the Flaming is such that it topples at the slightest nudge – it’s just good fortune that the house of cards (or glass) went down AFTER the drink was finished. 😉 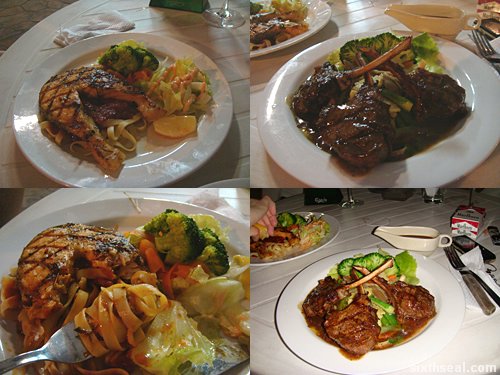 Doris had the Sunshine Salmon (RM 25.90) while I opted for the Rack of Lamb Attack (RM 31.90). The salmon was done well, nothing fishy going on there (har har, I am the Supreme Leader of lame jokes – just call me Ayatollah Pohmeini) while the rack of lamb was done in an acceptable manner, though it’s a little bit of the small side, portion wise.

It’s still not a great infringement to the name of the one and only God though, so I shall refrain from issuing a fatwa against the infidel cooks for tarnishing the name of the religion of peace. 😉