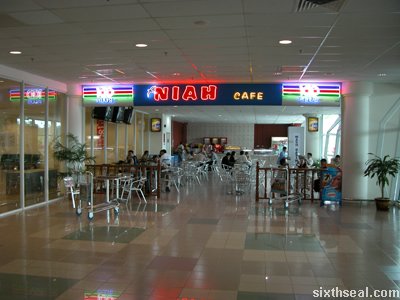 I went over to Bintulu, which is about a 50 minute flight from
Kuching, for a business trip. This time, the presentation was only due
late afternoon, so we had the whole morning to while away. We had the
option of eating at the Bintulu airport (which uses the same template
as KLIA) or going into town to find some place to eat. 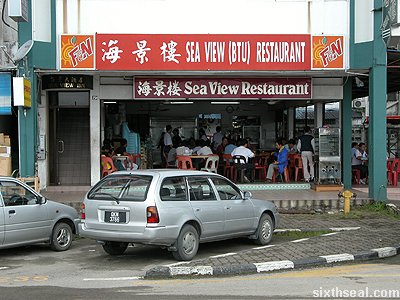 We chose the latter. Sea View Restaurant (BTU) is supposed to be the
liveliest place for breakfast around town, due to its locality. It’s
situated right in front of the river, and the incoming cool breeze made
in clear why it’s said to be the most popular place for breakfast
around Bintulu. I had some fried kueh tiaw, which was mass produced (it
came out within a minute) but tasted good nevertheless. 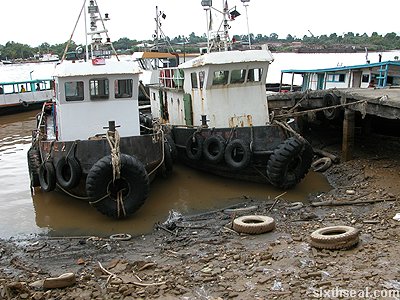 I took a walk down the riverfront (or wharf), which was quite
polluted due to Bintulu’s industries. It was a cloudy day in Bintulu,
but at least it wasn’t raining like Kuching. Bintulu is well known for
being an LPG gas processing town, but they do some sawmill work as well. 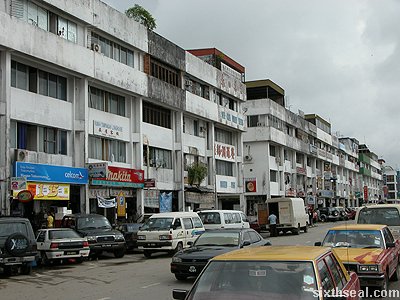 The old part of Bintulu town flanks the waterfront. Bintulu isn’t as
big or well developed like some other Sarawak districts but it does
offer some measure of old town charm that’s lacking in the other more
developed parts. 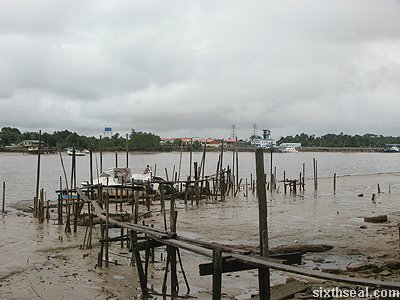 Walking further along the river shows the quaint wooden planks that
serve as a bridge for some passenger boats. Bintulu town seems to be
divided into two parts – one on each side of the river. The other side
of Kemena River lies Kampung Jepak, the fisherman’s village, which we
also passed by on the winding trip from the airport. 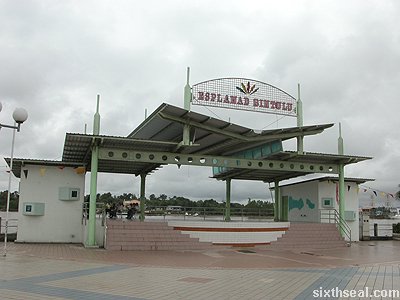 The riverfront centers on the Bintulu Esplanade, which is a commons
for the people and lies adjacent to the Bintulu Tamu and main market. 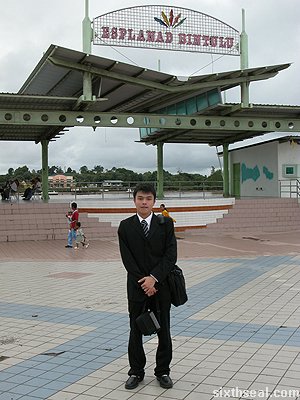 Here’s the obligatory “I was here” shot…and before you ask, yes, I only have one suit. :p 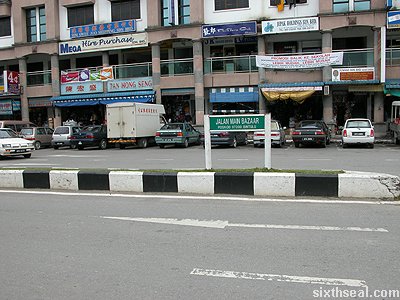 Bintulu town seems to center around the Main Bazaar and Pasar Tamu. 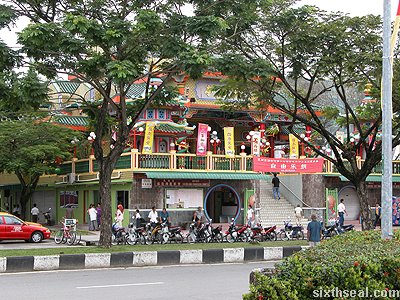 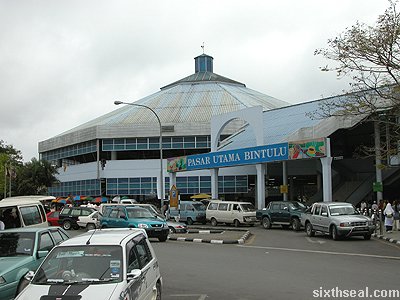 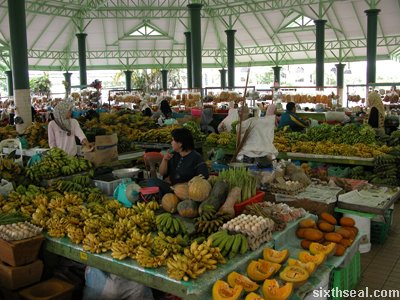 I know that there are a lot of bananas in there… 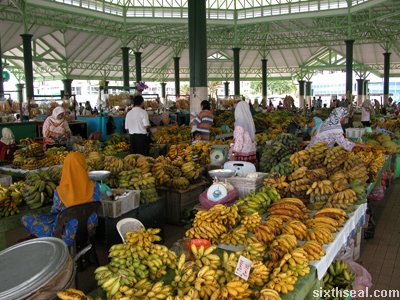 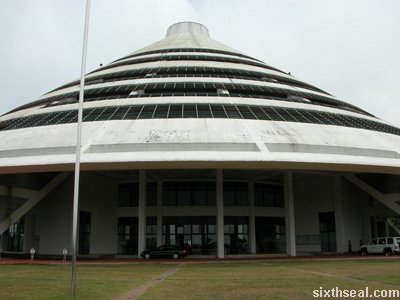 I supposed the BDA HQ conical shape is also supposed to represent
the headgear, I had been wondering about the seemingly high-maintenance
architecture. 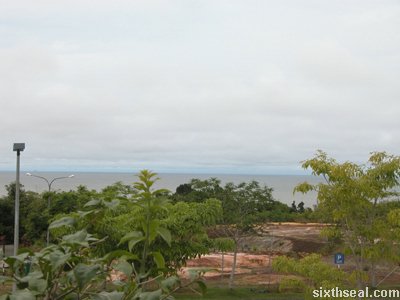 The high vantage point of the Bintulu Development Authority (BDA)
headquarters (its up on a hill) also allows scenic views of the sea.
The coast at Bintulu is not as renowned as the ones in Miri, but it’s a
beach nevertheless. 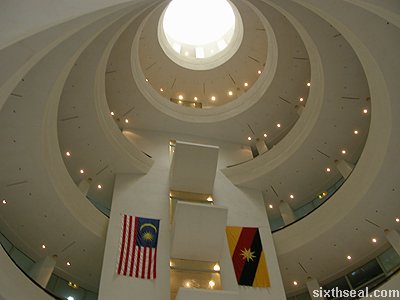 The inside is no less impressive, with several floors of ever narrowing spheres tapering off to a point. 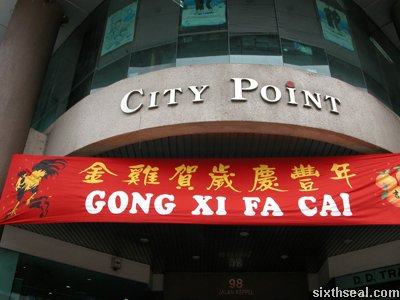 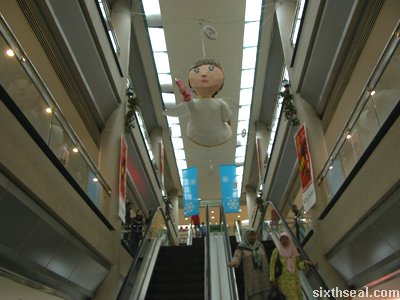 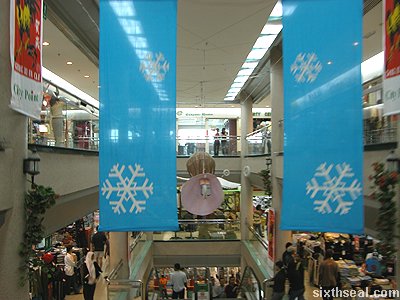 Our flight back took about an hour to fly to Kuching from Bintulu
due to bad weather conditions, but before going to the airport, I just
had to stop and take a picture of this: 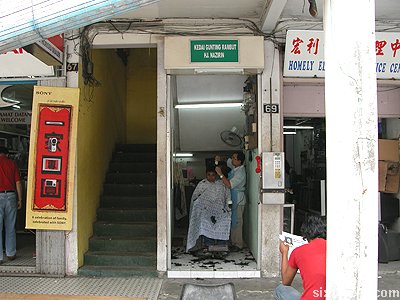 Behold! The smallest barber shop in the world!