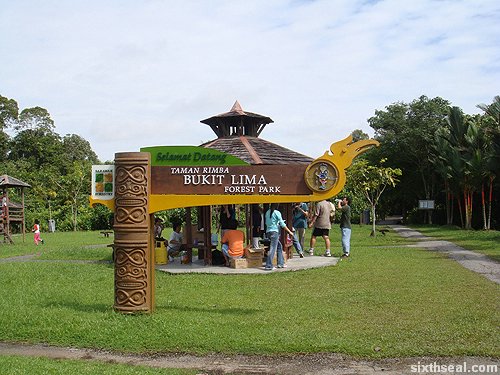 I went to Bukit Lima Forest Park with the people from work this morning. It’s supposed to be a jungle trekking session organized by the social club of the company that I work for. I headed over to Joyce’s house at 7:30 am coz I don’t really know the way to the forest park so I need to do a bit of tailgating behind her. 🙂 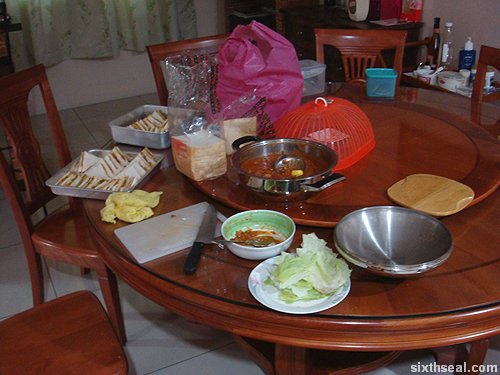 Joyce is the vice secretary of the social club and she was busy preparing sandwiches when I got there. 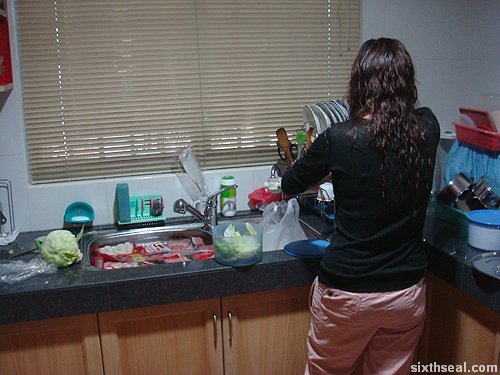 I helped out (kinda…at least I opened the packets of sausages ;)) and we loaded up the car with the food supplies and drove down to Bukit Lima Forest Park. 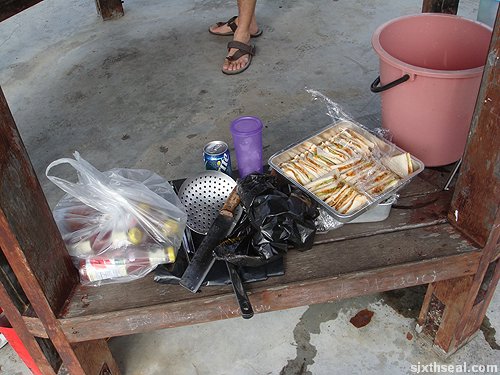 The place is rather hard to find, I certainly would have been lost without her. It’s not very far from Sibu town though, probably about a 15 minute drive away. We arrived there at around 8 am and proceeded to unload the stuff to a sheltered gazebo at the park grounds. 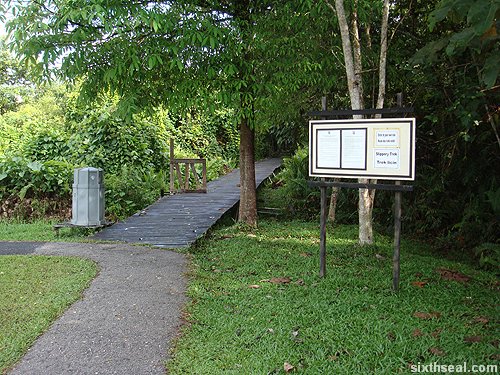 I headed straight onto the trail after that. It was a nice, cool morning and the sun wasn’t out in full force yet…perfect for a spot of jungle trekking, The signs read “Slippery Trek” and “Enter at your own risk” – not very reassuring epithets but it turned out to be a comfortable walk along a planked path. 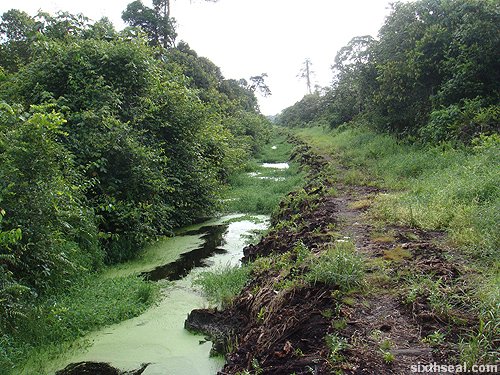 There was a stream overgrown with algae marking the start of the path. I was a little disappointed to find out that the sides were lined with common ferns and trees – no pitcher plants or exotic wildlife to be found here…

The most interesting thing we bumped across was a felled tree partially blocking the planked path but in all fairness, it was a nice, comfortable walk…just not terribly exciting. 😉 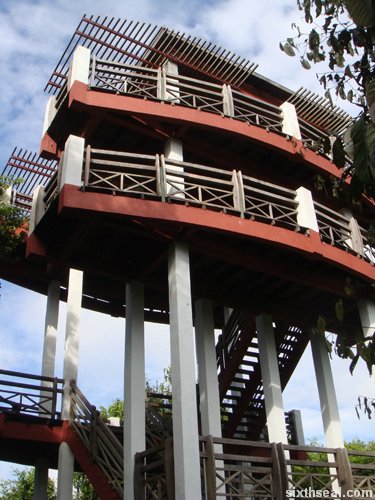 There was also a three story concrete watch tower near the beginning of the path. In grand Sibu tradition, the whitewashed pillars were adorned with graffiti left by an aspiring adolescent tagger. 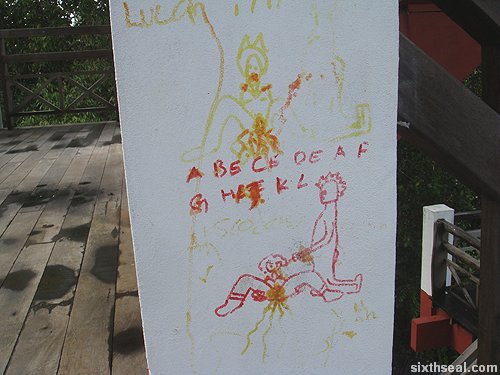 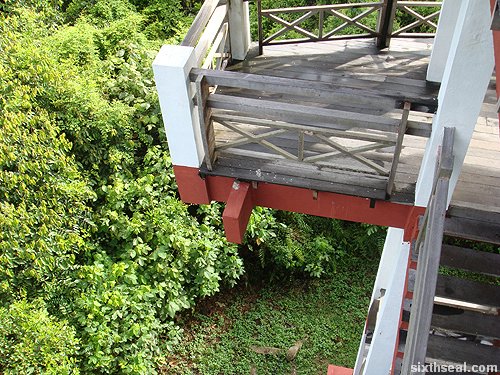 The top of the watch tower affords a view of foliage, foliage and more foliage. The diversity of the plant life is certainly nothing to write home about. 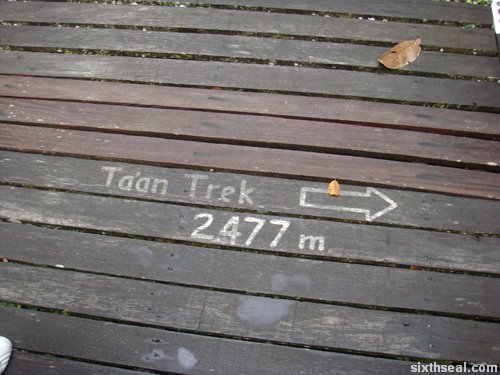 There are several trails to go on and we opted for the Ta’an Trek at 2,477 meters. 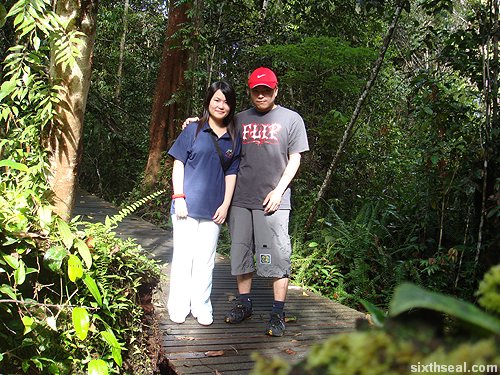 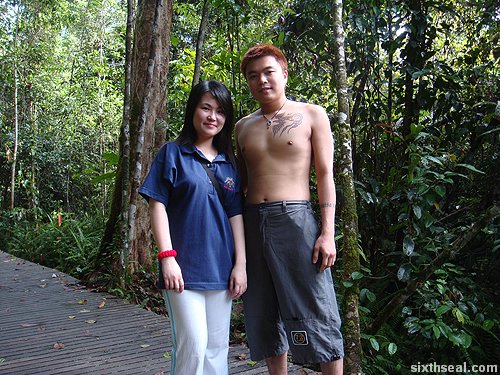 This is a photo of us after 3 km. 🙂
I haven’t actually lost much weight and this is a testament to that. I still have a substantial amount of fat around my waist that I need to shed. 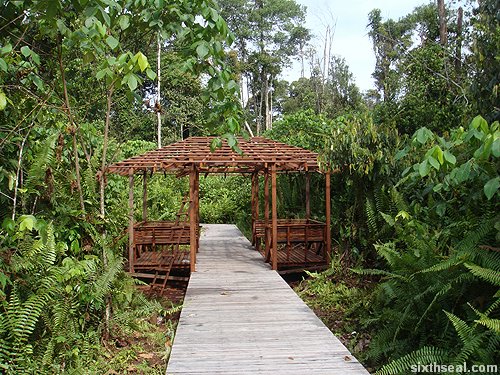 The Ta’an Trek is still a work in progress as we arrived at a partially constructed shed near the end of that trail. 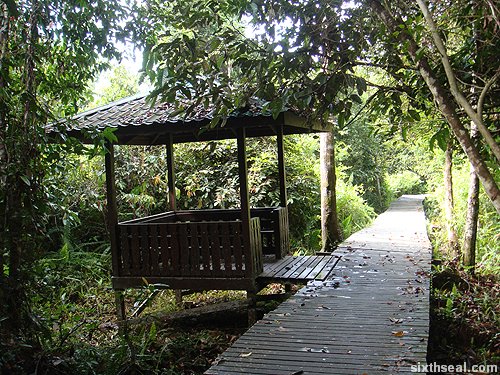 This is what the completed huts look like. There are several along the path for weary hikers to rest their weary bones in. The partially constructed one seems to be a deluxe shed of sorts as it can handle double the capacity of the normal sheds. 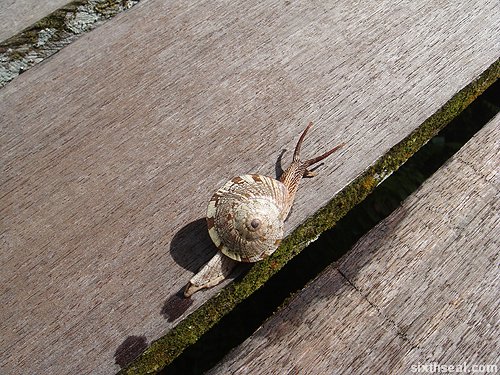 I also found a curious snail on the path. I’m not embarrassed to admit that I’m a little annoyed (read: scared) of flying insects and there was no shortage of that in the forest. Me and Kathy got harassed by all kinds of insects during the trek. I couldn’t even see some of them! I only heard the buzz of winged critters and perhaps a flicker of movement at my back which sent paranoid thoughts of cicadas or dragonflies landing on me and the subsequent frantic attempts to dislodge the imagined critters. 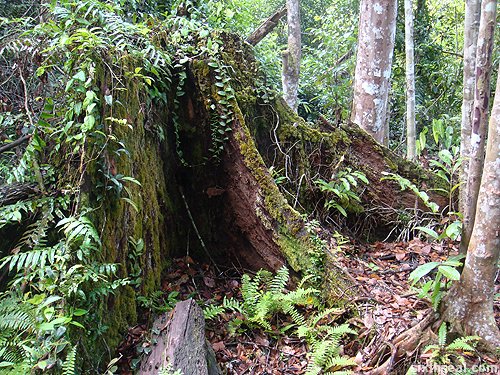 I much prefer to stumble across flora rather than fauna… 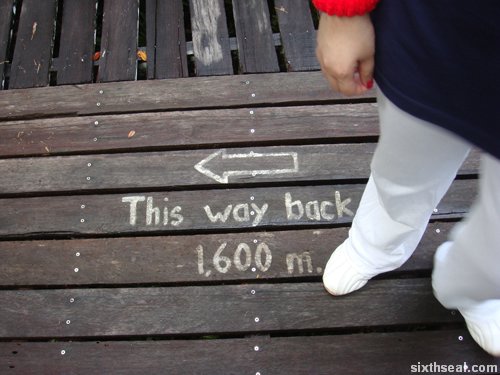 Thus, it was with some relief that we reached the sign marking the end of the trail. I walked a total of 5 km this morning – 1 km to the Ta’an Trek, 2.4 km through the Ta’an Trek and 1.6 km back. 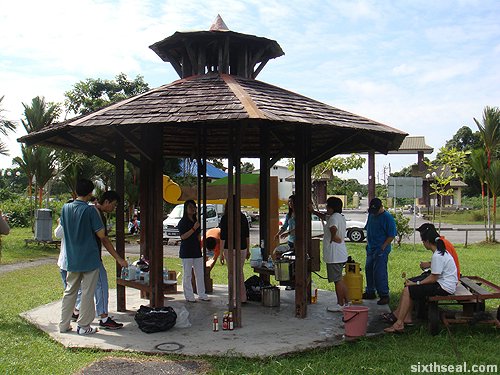 It was about 10 am when everyone finished the jungle trekking and we proceeded to the next segment of the program – food. 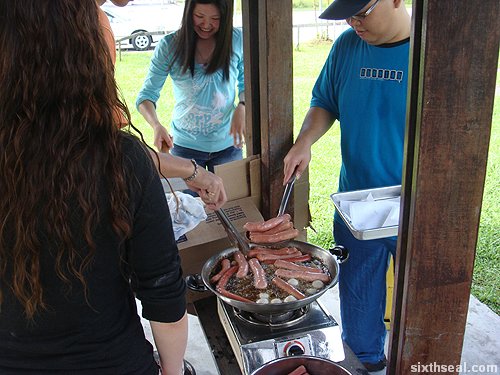 Someone brought along a tank of gas and a wok and started frying the sausages, fish balls and chicken wings for lunch. 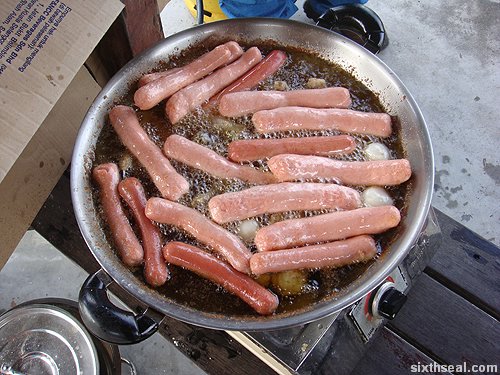 The sausages swelled to an amazing girth after deep frying in oil. I’m not sure why one brand of sausages does that while the other doesn’t produce an appreciable increase in size after similar treatment. 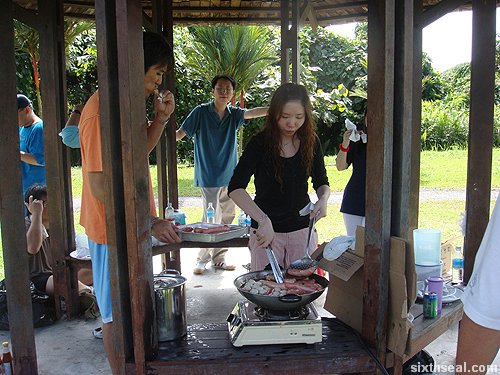 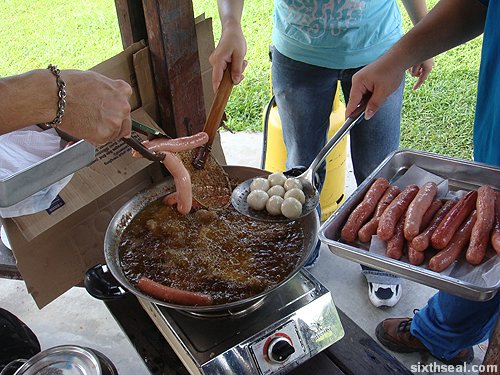 There was a lot of food – we ended up with a lot of leftovers and even passed some of the sausages to the security guards on duty, that was how much surplus we had. 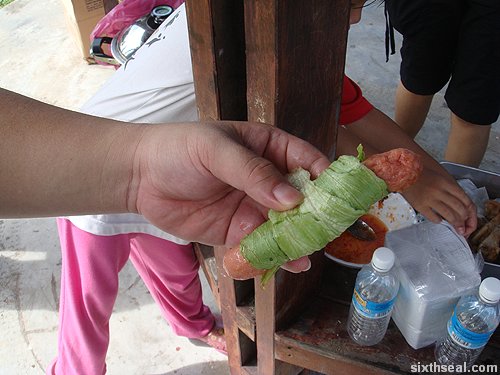 I was introduced to new and exciting ways of eating – this sausage wrap apparently makes the task of consuming the deep fried sausage easier coz the lettuce prevents the oil from coming into contact with your hands. 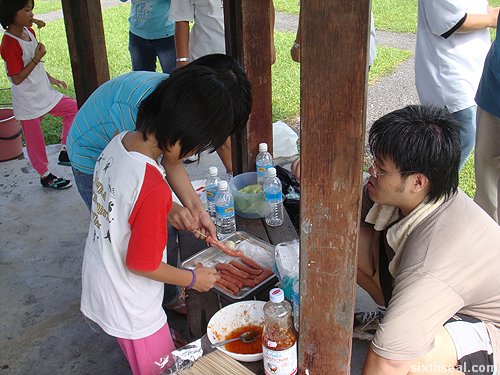 Some of the staff also brought their families along and the kids seem to have a lot of fun. 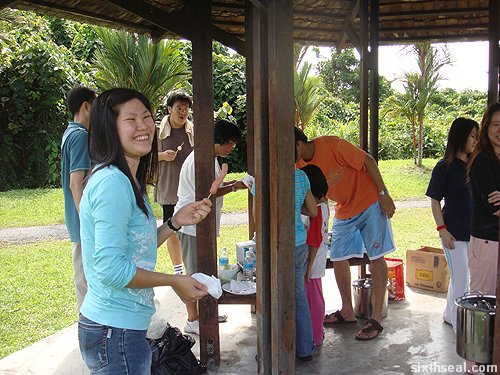 It was a very nice company outing, what some people would call “corporate bonding”. 🙂 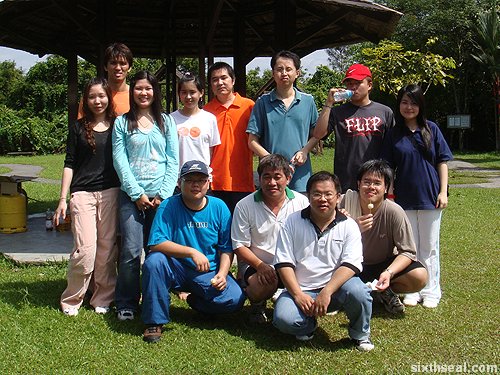