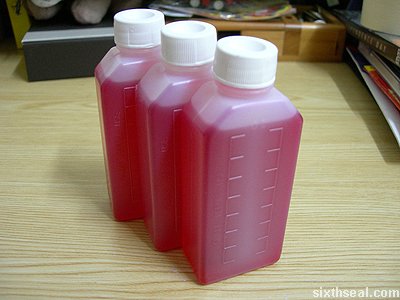 I went to the pharmacy when I was back in Sibu last week and asked
my friend for something new to try. I’ve always been curious about the
cough syrup that the locals in Malaysia abuse, since it’s not pure
codeine based syrup, but also contain other potentially CNS active
ingredients such as antihistamines in possible large doses and
pseudoephedrine. I was wondering what kind of “high” they get off from
this.

Thus, I went up to my friend (who owns the pharmacy) and told him I
wanted “the cough syrup that locals abuse”. He’s familiar with it,
obviously, since he’s sold quite a bit of it to various characters of
generally dodgy disposition. He immediately pulled me over to one side
of a cabinet which has cough preparations of various colors.

“This is the one you want,” he said, while pulling out red colored
syrup in pharmacy filled cough syrup plastic bottles. It’s the one that
the locals who want a cheap high get, I was told. I asked him what it
contains, and he said it just contains codeine, a small amount of
antihistamines and some pseudoephedrine. It goes for RM 1 per bottle
and I’m told that most users drink 1-2 bottles to get “high”. 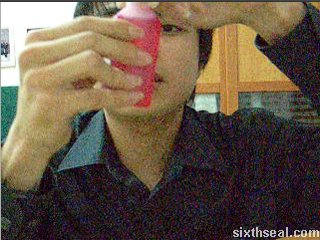 I felt a mild sedation consistent with codeine after ingesting 3
bottles of the generic cough syrup on an empty stomach. I also felt the
pseudoephedrine, but that was also mild. My estimate on the contents
would be about 20 mg of codeine and maybe 35 mg or so of
pseudoephedrine per bottle. I did not felt the antihistamines, nor did
I feel any high dose anticholinergic side effects, so I postulate that
the antihistamine content is too low for any significant impact on this
cough syrup formulation.

It wasn’t much fun, IMHO. It feels like a low dose of codeine, a
very slight, hardly noticeable opiate warmth with a concurrent slight
CNS stimulation due to the pseudoephedrine content. It’s a cheap and
dirty high. I would not take it again since there are more elegant
pharmaceutical solutions out there.