I really have to applaud the KLIA KL CAT system – it’s a really
nifty concept that allows you to check in at KL Sentral (!) and your
luggage goes direct to your destination (Melbourne in this case) while
you take your carry on into the KLIA Express and ride to KLIA in
comfort, without the need to check in again at the airport. A baggage
check in system and boarding pass issue service in the city! I was
impressed…just made it there at slightly before 7:20 pm so I was
eligible to check in there. You need two hours before the flight time
to be eligible. 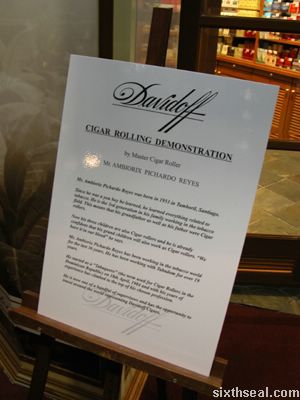 I requested a window seat as usual (good for sleeping, and I don’t
piss that often) and took the KLIA Express to KLIA. The train looks
like the interior of a plane, probably designed that way. Well, I
arrived at KLIA and followed the rest of the herd into the aerotrains.
I wanted to make a short post at the net center there but their line
was down, and the seats were filled with irate surfers watching a blank
screen, so I walked around instead and found a cigar rolling
demonstration. 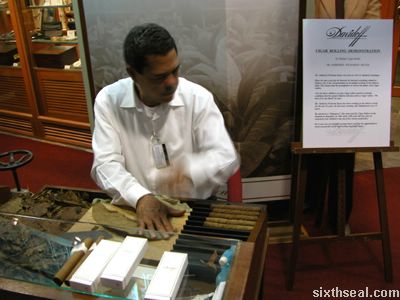 A nice big leaf of tobacco to start with…

It was organized by Davidoff and the person turned out to be “Master
Cigar Roller – Mr. Ambiorix Pichardo Reyes” from Santiago in the
Dominican Republic. He had leaves and fillers and all sorts of tobacco
around him. It was interesting to watch him roll a cigar, he makes
about one per minute and I was offered a chance to sample his freshly
rolled cigars compliments of Davidoff in the smoking room, but I had to
decline coz my flight was boarding. 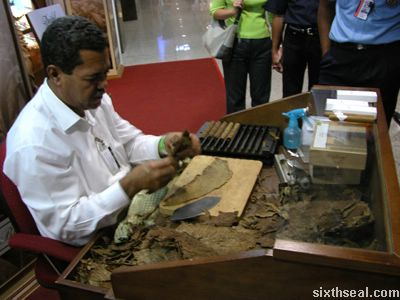 It was a bummer, I saw several people took up the offer though, it
would have been a nice opportunity to smoke a freshly hand rolled
cigar, it’s not something that happens to you everyday, at least not
here. 🙂 I think it was freshly rolled anyway, it’s not from the same
batch as the ones Mr. Ambiorix had beside him, and the ones offered to
us by the promoter looks more “finished”, but she said it was “freshly
rolled by the Master Cigar Roller, compliments of Davidoff”. 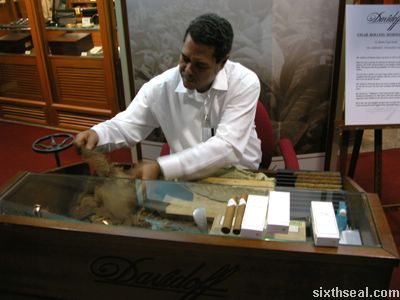 Pulling some tobacco into the roll.

Nevertheless, it would have been great to have one since the chance
doesn’t come by that often, so I wanted to just grab one, have a quick
puff and then run off to my gate, but doing that just for the sake of
doing it and leaving a perfectly good cigar with just one smoke in the
ash tray seems blasphemous, so I declined. I’ll have to say though, I
would not have declined if this happens again, with hindsight. 😉 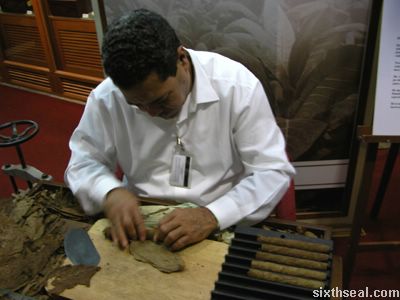 Rolling it all up into a cigar.

How many times can you say you’ve smoked a freshly rolled cigar by a
master cigar roller? Not very much…yeah, I’m still kicking myself
over it. Anyway, after taking a couple of photos (very grudgingly
taken, since I wanted to preserve CF Card space and battery power just
in case I couldn’t offload and recharge in Melbourne before the doof),
I boarded my flight and…couldn’t sleep. 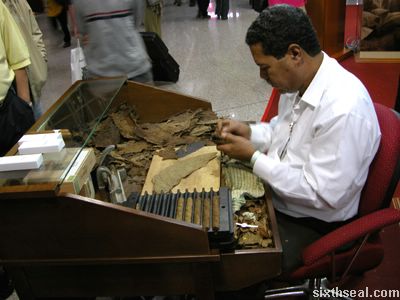 Yes, I took enough benzodiazepines to sedate a small horse. Yes, I
drank heaps of alcohol. No, I did not sleep the night before. However,
sleep just wasn’t forthcoming. Nope. It wasn’t. No sleep for the
wicked, probably. I filled in the declaration card since I was bored. I
only had two “Yes” answers, was hoping to go out the Green Lane. After
that, I still couldn’t sleep so I wrote a post while continuously
downing Bloody Mary’s with a cup of water (can’t be dehydrated before a
doof). 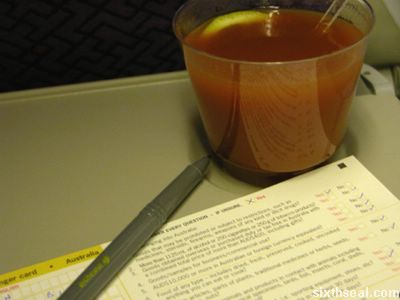 Yes for medication and used shoes.

It was called “sixthseal.com offline (12/12/2003)” and it was
written on pieces of tray liner (!) because the flight doesn’t have
letter pads, sorry. They did have postcards though, which they gave me,
but you can’t very well write on a postcard, so I asked for something I
can write on, and they gave me this. Personally, I think the cabin
attendants were just sick of me pressing the “Call” button and asking
for a Bloody Mary (can you make it stronger this time, please?) and a
cup of water every 15 minutes. 😉

Anyway, the two pieces of paper goes through things I’ve already
mentioned in this post, so I won’t be scanning it as I originally
intended. It had a story about me losing my Valium blister pack, which
I’m lazy to re-write, but yeah, I lost it somehow. There was either a
very sedated taxi driver or a very sedated MAS ground staff that night.
That’s at the expense of my sleep, those were 10 x 10 mg diazepam
tablets…I had to dip into my personal stash of 5 mg nitrazepam and
slept about 2 hours into the next day. 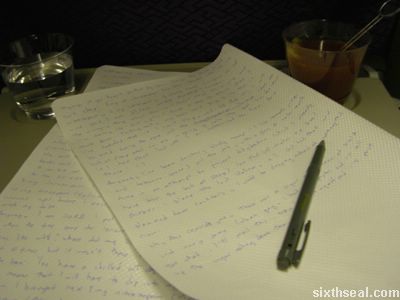 Oh, and towards the end, the irate cabin attendant made the Bloody
Mary in front of me. Heh. She poured two shots into the pre-mix in
front of me, probably to stop me from repeating “Can you make it
stronger this time?”. 😉 However, she did not allow three shots,
stating some obscure code they have to adhere to – she said I could
have as many double shot Bloody Mary’s as I liked, just not 3 shot
ones. The trick to get cabin attendants to keep on serving alcohol is
to appear sober and be polite and obviously, don’t slur your words.
I’ve read about some guy assaulting flight attendants coz they refused
to serve him more alcohol, and I’ve seen people being denied more
drinks on previous flights, but I’ve never had the same problem myself.
Their mistake was to be demanding and appearing to be drunk – two
things you shouldn’t do.

As always, retain a sedated composure (it comes with benzos anyway,
that gives off an impression that you’re not a “violent drunk”), appear
to be sober (don’t slur your words, don’t give off any outward signs of
intoxication) and just be polite and friendly. I’ve never been denied
drinks before and I’ve had more than my fair share during flights,
including an embaressing one that ended up with me passing out and
spilling drinks and er…finding myself on the floor when I woke up.
Even with that faux pax, I was still served, so if you aren’t already
aware of the obvious tips, keep them in mind and the free flow will be
free flowing you to sleep. I only had a two hour sleep – but that’s
going into Day 1…coming up soon!