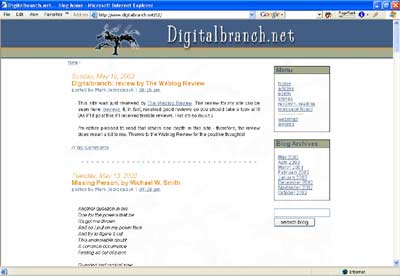 The first thing I noticed about Digitalbranch.net is the strong
Christian lean that’s evident from the introduction splash page. The
weblog describes itself as “One man’s thoughts, poetry, and writings –
an attempt to reach humanity and the people of God” and there’s a quote
from Jeremiah as well as several Christian oriented webring
memberships. The site is owned by Mark Jedrzejczyk and it’s been online
for quite a while.

The archives dates back to October 2002, but the “first” post on the
8th of October goes into the hosting troubles that Mark has
encountered, resulting in the site being offline for a period of time.
The pre-October 2002 archives are not fully up yet, but Mark has done a
good job in re-posting several of the more noteworthy entries. He’s
also clearly marked the re-posts as such (usually with a header
detailing the original post’s timeframe) and I found this to be a nice
touch.

The blog posts are mostly about issues related to Christianity and
Mark’s poetries and stories, which also tends to have a biblical motif,
from my subjective opinion. This can limit the site’s potential
audience, but I found it interesting to read about Mark’s struggle with
depression during the end of 2002 and early 2003 (from what I can see)
and his ways of dealing with it within a Christian context. Mark might
take exception with this though, as he mentions that “sad” would be a
better adjective and “wanderer” an even more suitable one in his 9th
April 2003 post.

I’ve also found his commentaries to be interesting, particularly the
one in February 2002 regarding “apostolicity” and his views about
atheism and the meaning of life in May 2003. I consider myself a
Christian and I’m fairly familiar with the scripture, so I can relate
to Mark’s posts, although his views are slightly more fundamentalist
than mine. Unfortunately, the blog does not get updated very often,
each month averages about 10 posts, but most of the posts are well
thought out writings, and that somewhat makes up for the irregular
posts.

Besides the main blog, there’s also a sidebar with links to
articles, poetry and stories that Mark has written. There’s a very nice
feature in those individual categories where the “last updated” date is
listed on the top. This is a good way of telling if the menu items have
been recently added to, and it certainly seems to be something that
will be appreciated by the readers.

The articles are further subdivided to General Writings (issues
related to Christians), General Textual Studies (Mark’s writings on
various books in the bible), General Topical Studies (history of
Christianity and other related issues), and Mark’s senior paper. There
is an article in General Writings titled “The Problem of Christian
Apathy” which I felt was a very interesting read. I can see that this
is a common occurrence in many Christians today, including myself, and
I was moved by this article because of the strong resonance the subject
has with me.

Revelation is my favorite book in the bible (as can be seen from my
site’s URL) and I enjoyed Mark’s studies on that book entitled
“Exegesis of Revelation 13:1-8” in General Textual Studies. Most of his
writings have a bibliography at the end, which is another nice touch as
interested readers can follow up the topic based on his citations. The
poetry section is nicely populated as well, but I can’t really comment
on poetry since I don’t have any background in this. The stories
section has a couple of stories, and I recommend that interested
readers take a look at “Anguish”, which I interpreted as a metaphor for
life after death.

The other links from the right hand sidebar is a Recommended Reading
list and a message board. I actually read Mark’s recommendation on C.S.
Lewis’s “A Grief Observed” before reading his blog, and that was where
I first noticed Mark’s experience with sadness (to use his term). I
have heard a lot about this book, but unfortunately, my readings of
C.S. Lewis’s works is limited to his Narnia series that I read during
my childhood. The message board is a good feature, but it’s not being
used much by the readers of the site. The final items on the sidebar
are links to webrings, an awards section (where Mark lists the web
awards his site has acquired) and a search feature.

The design of Digitalbranch.net is clean and efficient, I liked the
small sidebar and the “directory style” browsing feature. By this, I’m
referring to the hyperlinks that appear at the top when browsing into
the categories (eg Articles / General Writings / How to Pray). This
allows for fast and easy navigation even when browsing “deep” into the
menu items. This is a very nice touch indeed.

The site is also optimized for users with a lower screen resolution,
which is a rarity nowadays. The only “flaw” I could find in the design
is that I was expecting the large banner on top to be clickable and
I’ve clicked on the static image in vain several times before realizing
that navigation to the main page is provided by the “Home” link in the
sidebar and also the top of blog pages. Design is not my forte, but I
feel that the large banner would be an ideal anchor to the main page.

Well, the site’s emphasis on Christian related issues would limit
the appeal to readers who’s interested in those issues, but that’s not
necessarily a bad thing. Mark has thought about expanding the site’s
focus to include more subject matters, but decided that doing that will
involve writing about “issues (that) are not generally near and dear to
my heart”. I respect Mark’s decision and I agree that having a strong
focal point on Christianity has its appeal to similar minded readers. I
recommend that everyone clicks through to Digitalbranch.net if you’re
even slightly interested in religion (and even if you’re not). At the
very least, it’ll be an insight into Mark’s devotion, which I’ve found
to be nothing less than impressive. I’m giving it a 5 for the unique
content and the interesting articles and stories.

This site was reviewed on 2003-05-18 by sixthseal.
They felt this site belonged in the Personal category.
sixthseal felt that Digitalbranch.net deserved a rating of 5.0

Digitalbranch: review by The Weblog Review

This site was just reviewed by The Weblog Review. The review for my site can be seen here: (review). It, in fact, received good reviews so you should take a look at it!
(As if I’d post this if I received terrible reviews. I kid oh so much.)

I’m rather pleased to read that others see depth in this site –
therefore, the review does mean a lot to me. Thanks to the Weblog
Review for the positive thoughts!

Changes: The links of the original Digitalbranch.net post has been changed to open up in a new window.