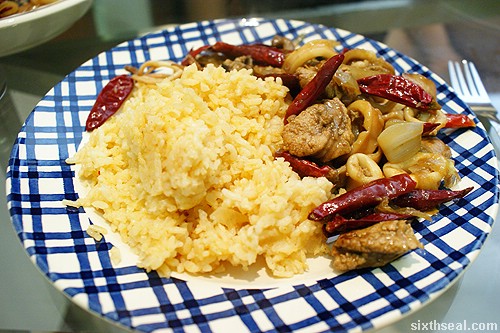 I hardly ever cook Chinese meals although I love eating tai chow as much as the next Oriental dude. The main reason for this is coz I don’t have a huge wok and a good ol’ fashioned flame for that elusive “wok hei” (literally wok heat – a reference to the caramelized texture of superheated food). 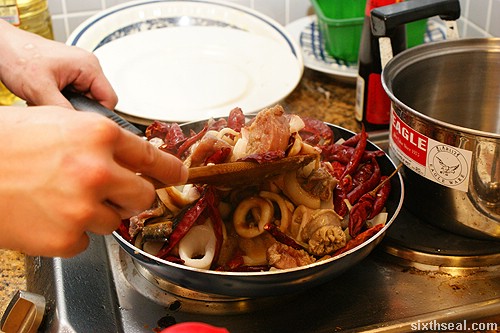 I like kung pow (insert meat) so I decided to go back to my China roots and start cooking some Chinese food. 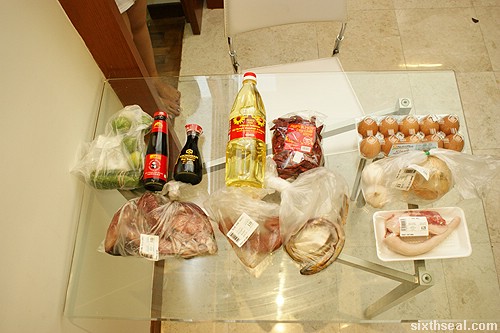 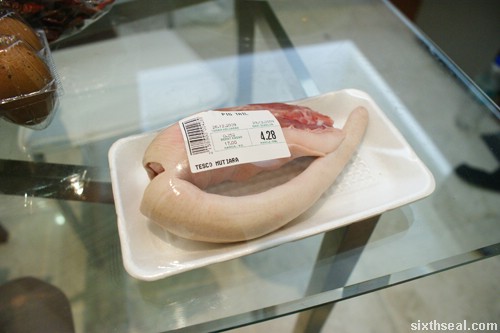 Kung pow dishes are made with dried chillis, which obviously makes this an essential ingredient. Here’s a detailed (geddit? de-tailed) photo of the pig’s tail. 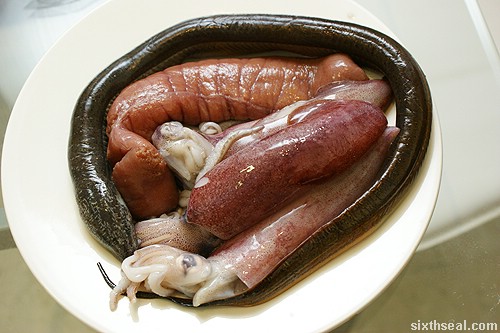 We started off by preparing all the seafood items. 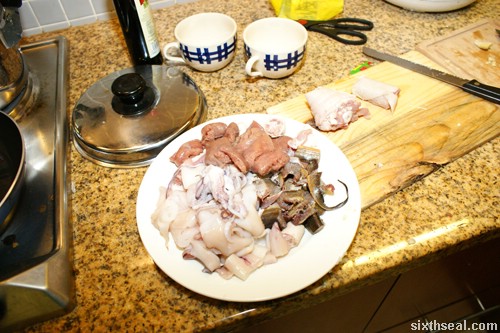 Eel, those snake like creatures dwelling in the depths of the ocean (talking crap here) should be cut into bite-sized pieces. The squid has to be disemboweled and sliced into rings. You don’t really need to have a ring shaped apparatus – squid is hollow after preparation so just slice it and it’ll produce rings. Calamansi limes were squeezed over it to get rid of the distinct aquatic smell.

Fish roe. Mmm…full of cholestrol, but yet so delicious. 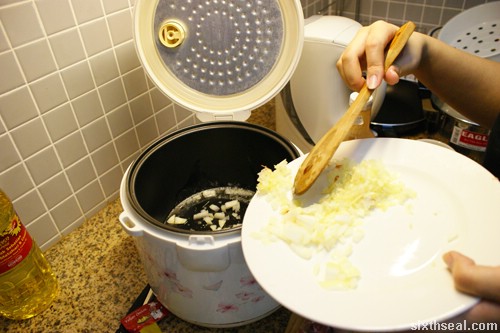 My friend decided that this won’t taste very good with normal steamed rice – a point I vehemently disagree – so she added in some cooking oil and chopped garlic into the rice cooker. 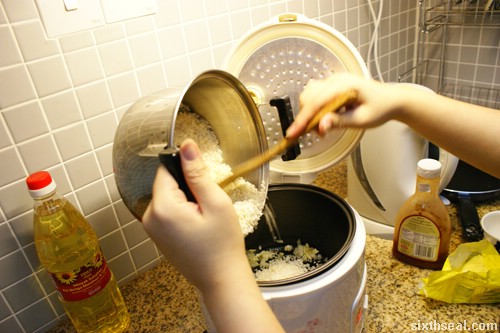 This is fried INSIDE the rice cooker BEFORE the rice was added in. 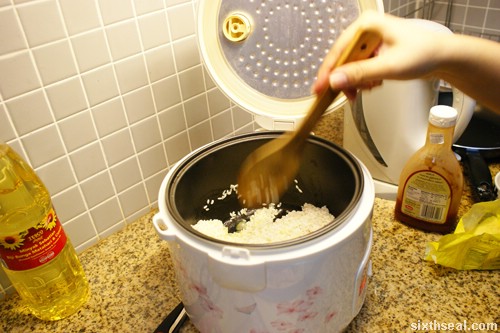 She then measured out the rice and started frying it with all the above before adding water and cooking it with several sauces lying around in my fridge. 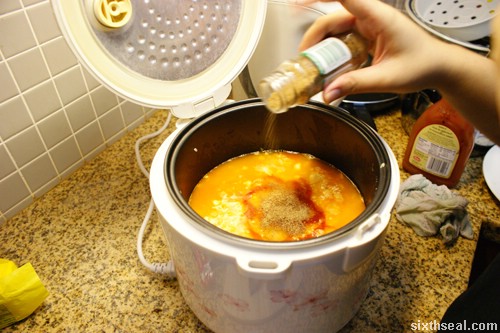 Now, for the difficult part. Babe’s (not Babe Ruth, Babe the pig) pretty little pink tail has to be chopped up. 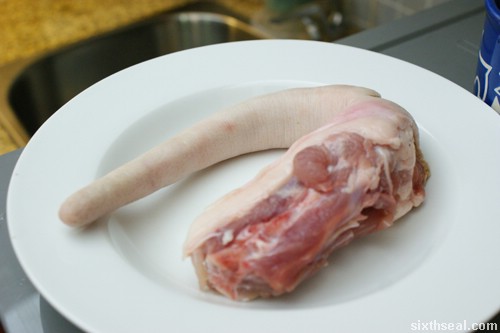 This is more difficult than it sounds. I never knew those damn swine would have tendons/cartilage/whatever you call it as tough as this.

I attempted to do it with a serrated knife. Let me advice you that this is a Bad Idea (TM) and could lead to unfortunate incidents like Slicing Your Damn Finger Off (TM) as almost happened to this narrator. 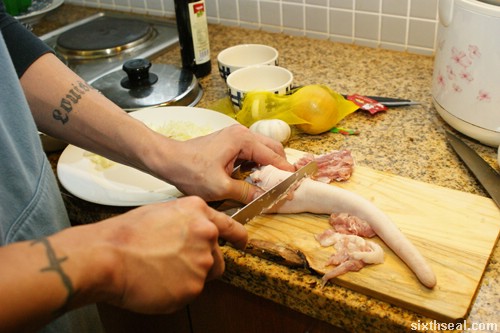 I have a chopper which I forgot I had. Use a chopper instead. You’ll thank me. 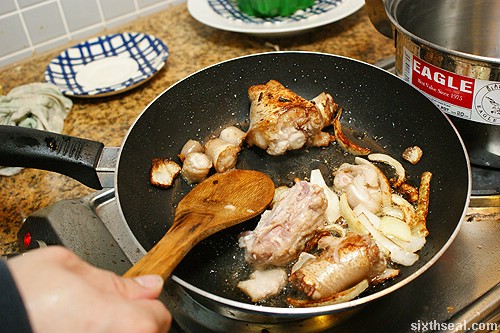 Anyway, add in the sliced onions and start frying Babe’s tail in extra virgin olive oil since he’s like a nice pig and all and even his tail deserves reverence.

It requires a Great Deal (TM) of frying which translates into 3212999 days in the standard measurements of time. I’m not kidding, it takes ages for the damn thing to cook. 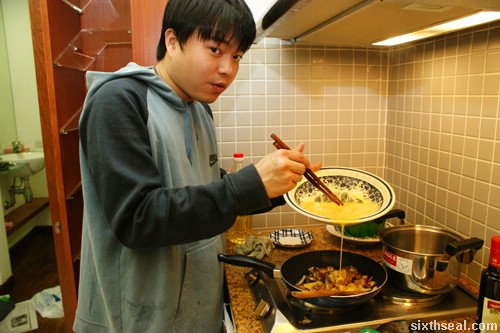 After the piggy’s tail is all nice and cooked, crack six (6) eggs into the frying pan. Oh, before I forget, cooking posts are always meant for two. As in it should have a Serves: 2 on top if this were a proper cooking blog, which obviously it’s not. I just like to cook. 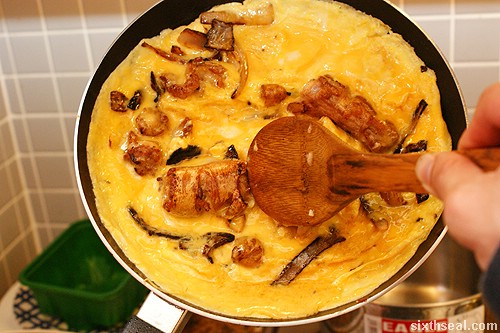 Put it on low heat until the pig’s tail omelet cooks to perfection. 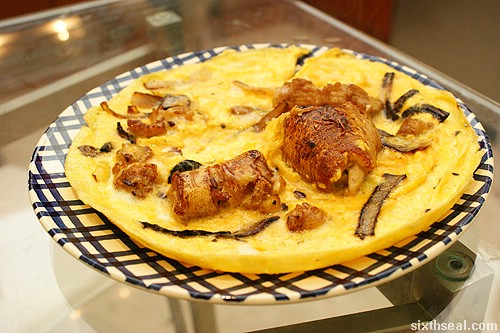 Now, let us concentrate on the seafood. Fry finely chopped garlic (a point I neglected to mention at the beginning – you should have chopped garlic. Heh!) and add in the dried chillis. 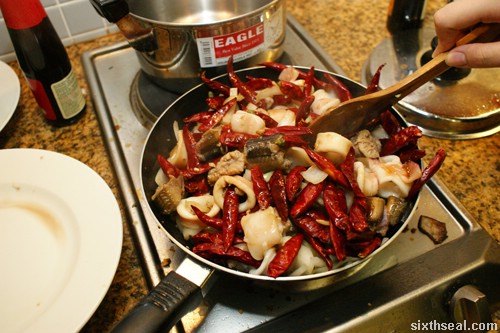 You’re going to need a lot of oil for the kung pow fish roe, squid and eel so we got a Sunflower Canola bottle for this (Tesco store brand).

Cook on the highest heat your stove/heating element/whatever can manage (which isn’t very much for my ceramic one). Keep this going for a good 3 minutes or so and start adding in the seafood. Start with the squid (cooks slowest), quickly followed by the eel, and the egg roe at the very end (coz I like it kinda raw). 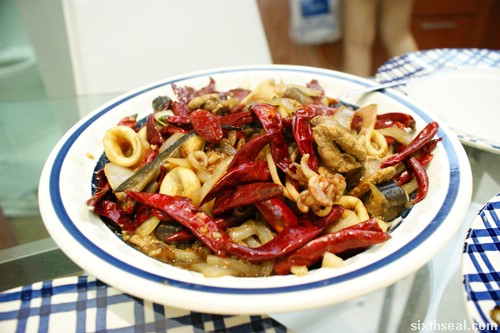 Add in some oyster sauce and soy sauce and fry it as vigorously as you can for 10 minutes and then serve. 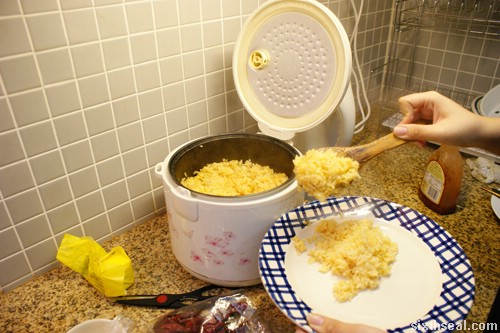 The fluffy rice was nicely flavored and the pig’s tail omelet went well with the kung pow fish roe, squid and eel to subdue the spiciness of the dish. 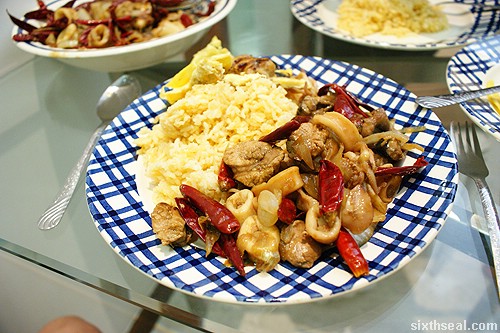 Verdict: It was a good effort, but it wouldn’t beat even the crappiest tai chow’s kung pow offerings, due to the lack of wok hei (read beginning for definition).