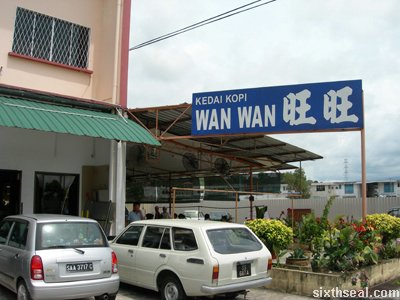 Kedai Kopi Wan Wan is an auspiciously named eating
establishment in Kota Kinabalu, Sabah. The eatery specializes in fish
noodles (as in noodles made of fish puree) and fish pieces (also made
from the same puree). It came highly recommended from a KK resident who
claimed that seafood and the fish noodles here are the only noteworthy
specialties in Sabah. 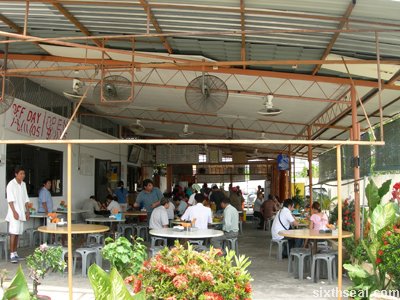 It seems that a lot of KK residents agree, as the place was packed
during lunch and even well after lunch hour. Kedai Kopi Wan Wan spans
two large shop houses and is neatly compartmentalized into indoor and
outdoor (the term al fresco should never be used to describe the
Malaysian dining experience) spaces. The tables were filled with people
eating the much lauded fish noodles and a side dish of fish slices in
soup. 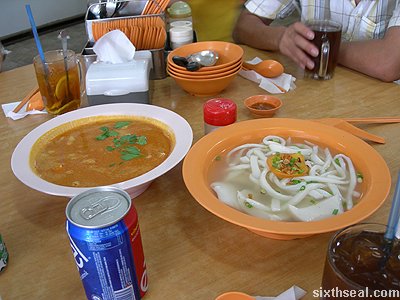 The three of us and the couple residing in KK that we met up with
recommended eating the dish like the locals do – having a personal dry
noodles dish and a shared fish noodles and fish slices in broth
community bowl. The fish slices/noodles (or a combination) is cooked
with the soup of your choice and the interesting bit about this
establishment is that the soup is refillable at no cost, much like a
steamboat. 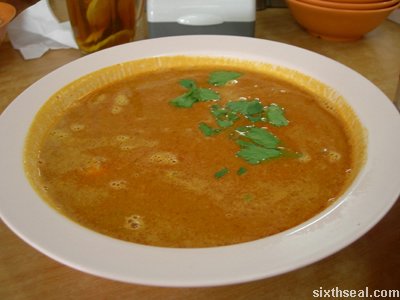 This is fish slices in Assam Tom Yam soup. It tastes like tom yam soup with a dash of the sour assam
tang. The fish slices in this dish are made from real fish cuts. Fresh
fish is cheap and plentiful in KK due to its proximity to the sea. 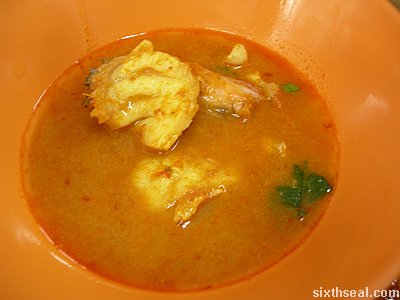 Here’s a closer look at the fish slices in the orange looking Assam
Tom Yam soup. The soup is hot and spicy and the fish tastes good when
paired with the dry noodle dish. 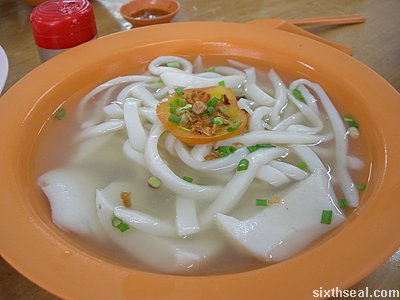 This dish is based on plain broth (cin tan in Mandarin) and
is a combination of fish slices and the famous fish noodles. It tastes
better in this implementation as the soup is bland and does not
overpower the taste of the fish. 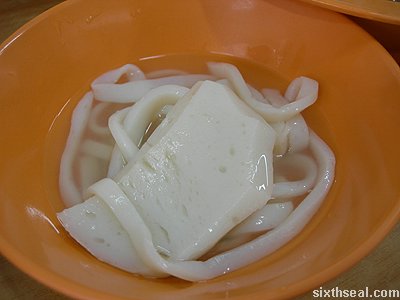 The fish slices are made from fish flesh which has been grinded up
and shaped into rough, uneven slices. It’s a little like a flat
fishball. The fish noodles are thick, flat noodles made of the same
processed fish. 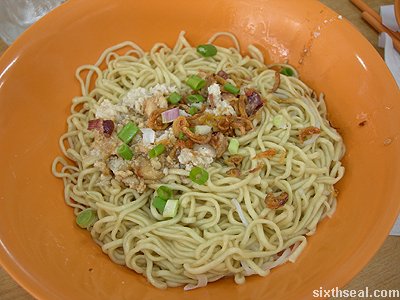 The main fish soup dishes are meant to be eaten with this dry noodle dish, in lieu of rice. This dry noodle dish is also called kon lo mee
(dry tossed noodles) like its Kuching counterpart, except that it’s
eaten with fish instead of meat, presumably due to the relative
abundance of the former in KK. 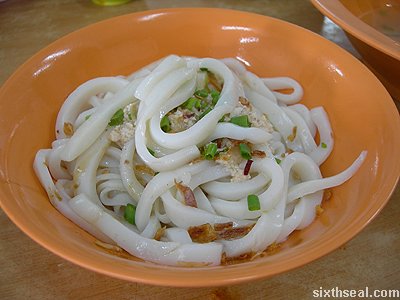 Our hosts were kind enough to order another popular variant of this – kon lo
fish noodles. It’s like the dry noodle dish, except that it’s made with
fish noodles instead of flour noodles. It’s tossed and served dry, and
it’s interesting to eat a noodle dish made entirely of fish flesh.