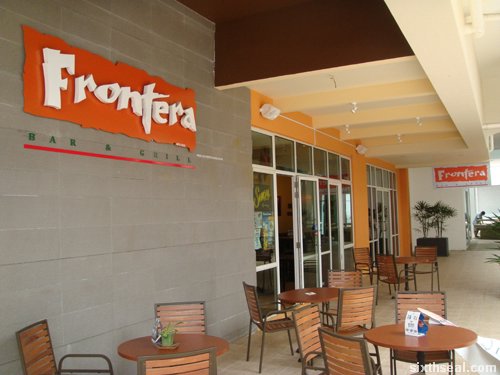 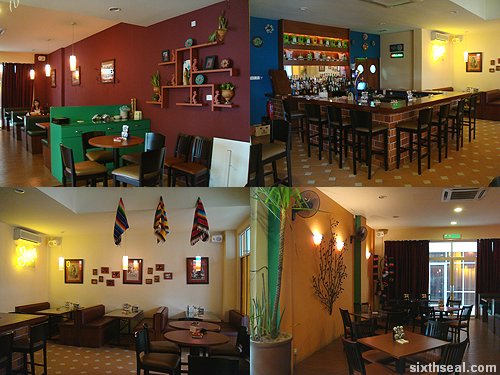 The interior of Frontera Bar & Grill has a distinct Mexican theme with agave plants, pictures of person(s) of Latin American descent, and sarapes hanging from the ceiling. The colorful pieces of fabric adds a lot of ambiance to the place, as does the Mexican gangsta rap music emanating from the speakers as we walked into the eating establishment. 😉 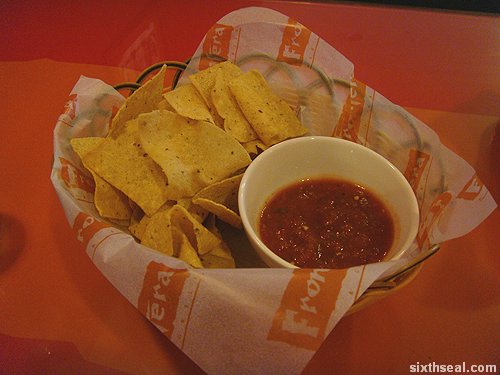 The friendly waiter informed us that Larry was on his way and served us some Chips & Salsa while we were waiting. The salsa is homemade with fresh Jalapenos and serves as a great dip for the chips. I love scooping up the salsa with the nachos, it makes for a fun snack and we were famished from not eating the entire day (due to waking up a scant hour before, nursing a hangover). 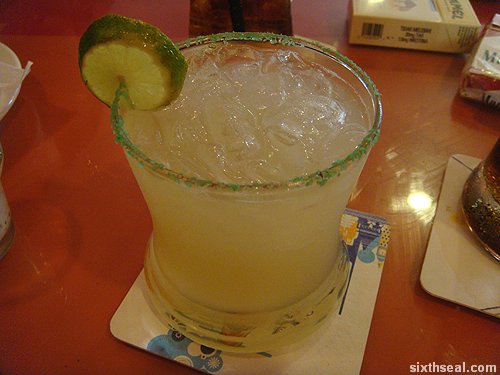 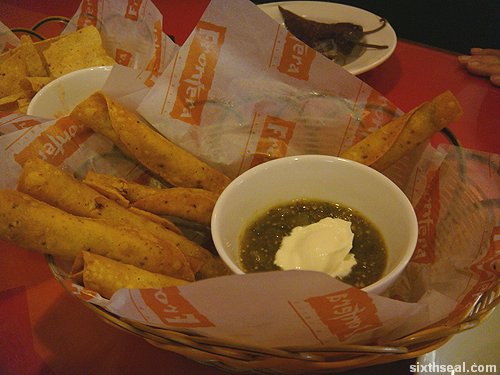 This is the Taquitos de Pollo. It’s an appetizer made with Frontera chicken wrapped in corn tortillas and served with salsa verde (green sauce) and sour cream. The Frontera chicken is submersed in their special chili marinade before baking and it came out juicy and creamy. The contrast between the tender chicken and the crispy tortilla skin creates an interesting texture in the mouth. The salsa verde and sour cream sauce also serves as a good antidote for the Habanero chili challenge I took on. 😉 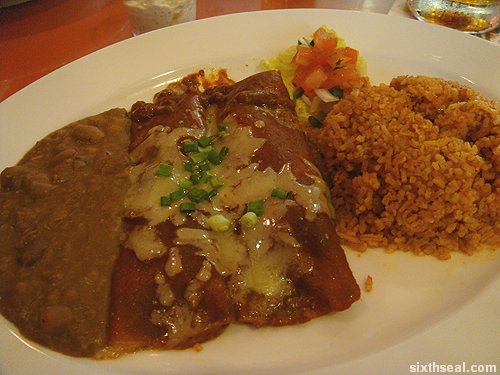 I had the Beef Enchiladas, which Larry recommended. It’s made with New Mexico Red chili sauce and topped with cheese. The beef is specially ordered with just the right amount of lean meat vs fat ratio and it’s so tender it almost melts in the mouth. The chili used in the dish had to be imported in as well. I love this dish. I rate this the best of the Frontera menu. 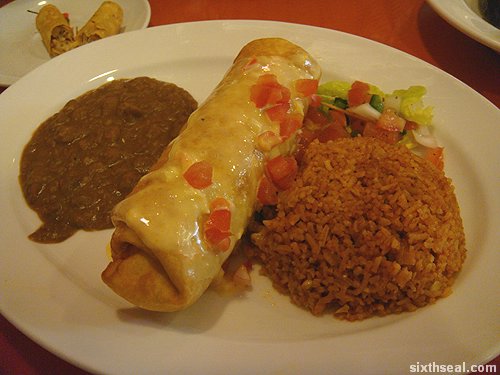 Doris had the Chicken Chimichanga which is a huge wrap of chicken served with a side of frijoles refritos (Refried beans) and Mexican rice. The Chicken Chimichanga is topped with melted cheese and the refried beans and Mexican rice on the side makes it a very filling dish. Frontera doesn’t skimp on the chicken too, the wrap is chock full of chicken pieces. 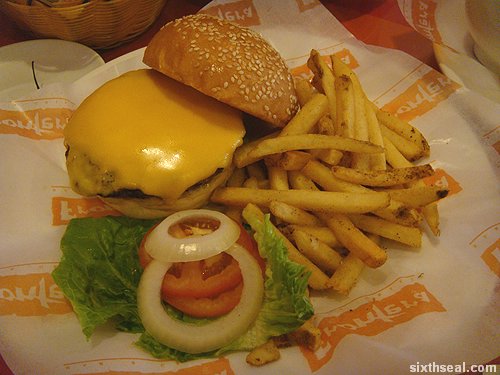 We also got a chance to sample the new menu, affectionately dubbed “Gringo Fare” by Larry. This is the Frontera Cheese Burger which is served with fries sprinkled with Frontera’s chili peppers. The cheese burger is huge and comes with a lot of cheese – a perfect cheeseburger. It still maintains the Tex-Mex influence from the flavored fries and the beef patty is juicy and delicious. 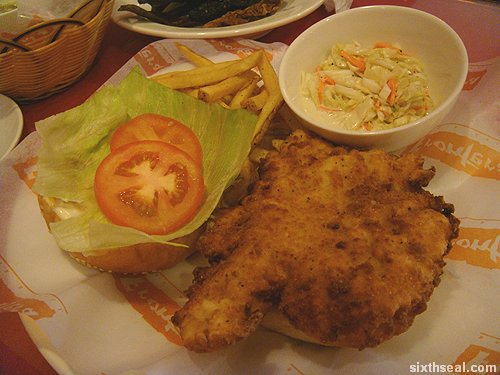 The next item in the yet-to-be-released new “Gringo Fare” menu is the Frontera Chicken Sandwich with Jalapeno Coleslaw. I reckon it shouldn’t be called a chicken sandwich – the lean chicken cut inside the bun is so enormous, it should be a main dish in its own right! My girlfriend really liked this one, the chicken is tender and juicy and the Jalapeno coleslaw stays true to Frontera’s Tex-Mex roots. 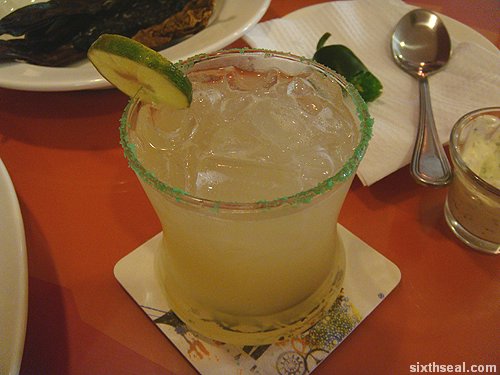 The huge meal was washed down with Frontera’s Agave Margarita, which is made with agave syrup instead of sugar syrup. The difference between a pure agave margarita made with agave syrup is surprisingly distinctive from one made with sugar syrup. It doesn’t really hit you until after a while too, and Frontera serves their margaritas with a full US shot (as in 45 ml) instead of the UK definition of a “shot” (25 ml) which most pubs use. 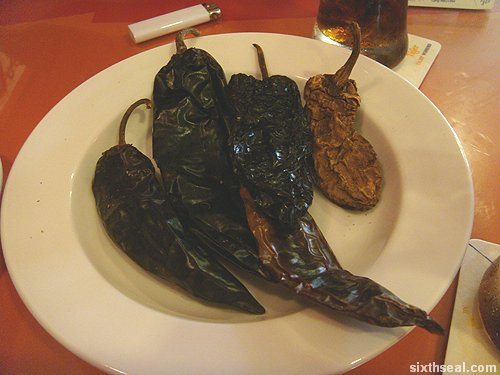 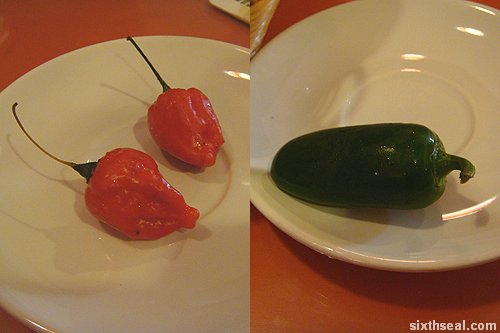 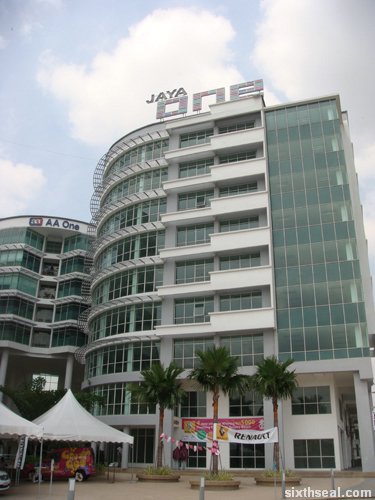 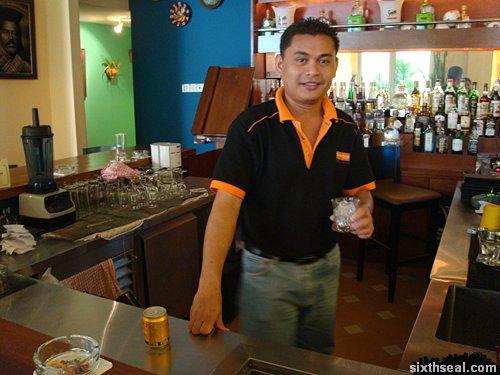 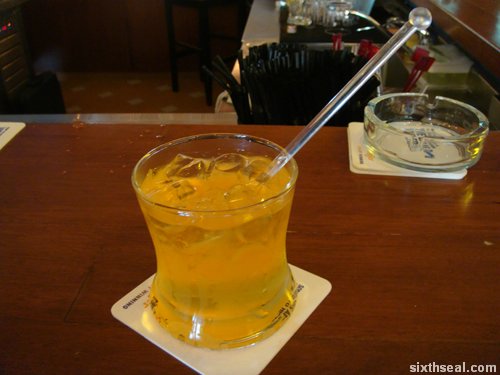 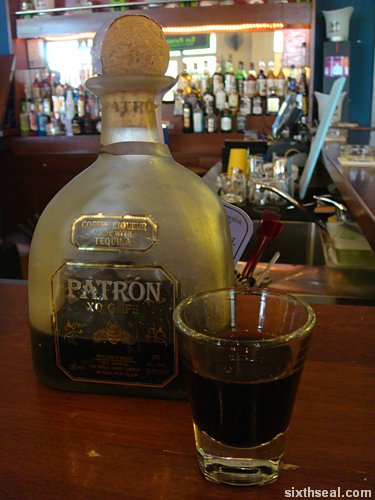 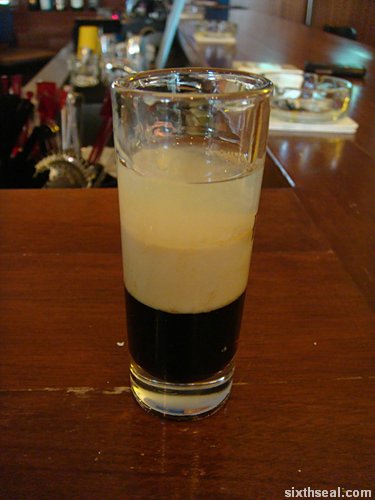 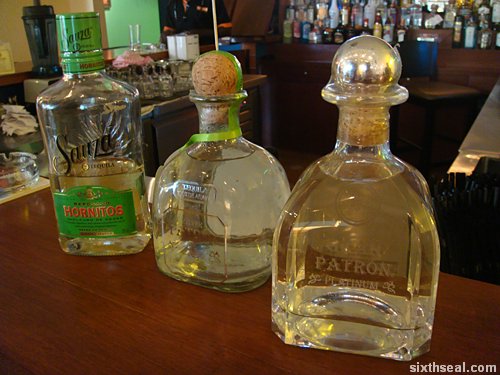 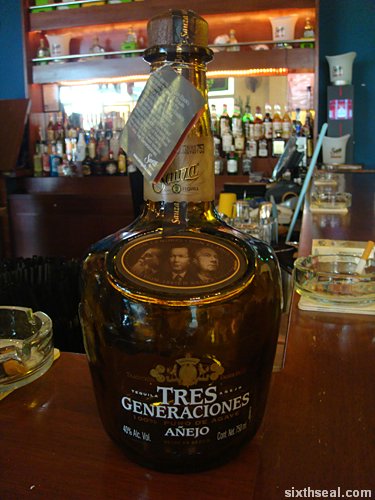 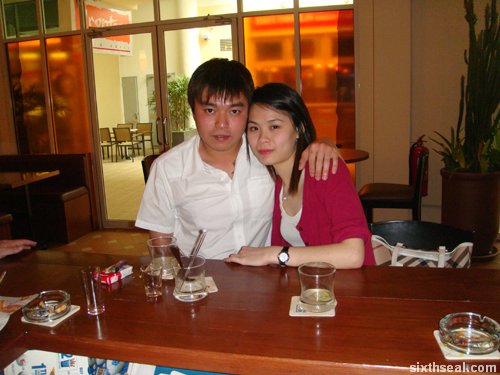