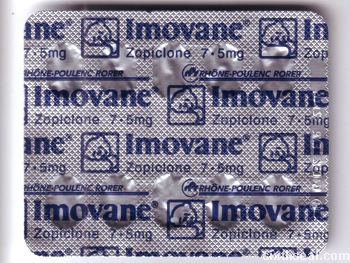 Zopiclone (Imovane, Zimovane) is one of the newer “z drugs” that is
pharmacologically similar in action with benzodiazepines but with a
different chemical structure. Zopiclone falls into the category of
cyclopyrrolone derivatives, and it’s a non-benzodiazepine with
benzodiazepine like properties. Zopiclone is not prescribed in the
United States but it’s available for prescription in Malaysia. It is a
prescription only drug here, but the middleman (doctor) was bypassed
thanks to my friend who has a pharmacy. My apologies for harping on
this, people would be emailing me about how to get a doctor to
prescribe things if I don’t make it clear how I got them. Which reminds
me, I have a large backlog of experience reports from The Wonderful
World of Pharmaceuticals in the backburner due to my acquaintance, but
I digress.

Imovane tablets comes in a blister pack containing 10 tablets, which
retails for RM 25 (A$ 10). This makes each 7.5 mg tablet of zopiclone
RM 2.50 which is not very cost effective as benzo equivalency charts
suggests that 15 mg of zopiclone = 10 mg of diazepam = 0.5 mg of
alprazolam. However, it is one of the longer lasting “z drugs” – with a
half life of 5 – 6 hours compared to 2 hours with the other two. It is
marketed as a hypnotic (sleeping pill) and is supposed to feel like
benzodiazepines, unlike OTC (over the counter – the stuff you can buy
without a prescription) “sleeping pills” which are usually
anti-histamines or stuff like St. Johns Wort which personally does
nothing (I am tempted to use the term “jack shit” but that would sound
like “drug elitism” ;)) for someone who is used to benzodiazepines. 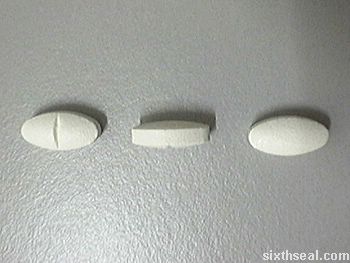 Imovane tablets – side, front and back view

Anyway, I have taken doses ranging from 15 mg – 75 mg (whole blister
pack) and found that it’s quite recreational at high doses with alcohol
or opiates (be careful), but the BITTER aftertaste which can last till
the next day is rather off putting. I would liken that strange taste to
scraping an old piece of plastic onto dirty pebbles and stick an
aluminium foil at one side and lodging it in your throat for a day. It
does taste bad, no doubt about it, but it’s bearable, it just makes
drinking water kinda distasteful. It is helpful while tapering off
benzodiazepines though, I find that the benzo equivalence chart is not
really accurate – I have a high benzo tolerance, but zopiclone still
manages to induce sleep at doses less than the equivalent of diazepam
and alprazolam. Here are a few of my (unedited with spelling errors)
notes: 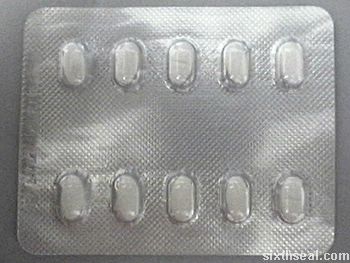 zopiclone – first time, 3 tablets. after 45 min, thought i saw blood
dripping, but it was just my red t shirt reflecting off the surface.
got the feeling of “there’s someone behind me, but when i turn he/she’s
gone”, but whether that and the blood visual disturbance is influenced
by previous reading of this class of drugs causing hallucinations in
some people is not known. felt a low level anxiety, but whether that is
because of a first time w/ a new drug and mixing with 3 drinks (downed
quickly) at the 50 minute point is unknown. felt the “there’s something
wrong in my visual field but i can’t point out what it is, but
something is wrong” feeling like the start of an acid trip, and anxiety
is hightened. general feeling of unreality. when calmed down at 1 hour
point, felt hypnotic effects take over. not very strong, but drowsiness
is present at a low level. all manifestations of visual disturbances
have disappeared as of now (t+ 1:10)
no “horrible taste” in mouth as reported in side effects. first time
anxiety slightly present, could be due to benzo taper too. when ignored
and relaxed, it feels quite like benzos, nice and easy and sedating,
more hypnotic, i would liken it to valium and flunitrazepam in hypnotic
effects. “euphoria” (if you like benzo euphoria) is 5.5/10 with
flunitrazepam + alcohol + cannabis being 10/10. take note that is a
subjective/arbitiary figure. amnesia effects similar to benzos, could
still remember previous events before and after the dosing and alcohol
addition. it’s okay, good for SLEEP for recreation, hmm…its a bit to
hypnotic for that. er..yes…at t+ 1:25 there is a bitter taste in my
throat NOT in my mouth or tongue but IN the throat and can be “noticed”
upon breating in but not breating out. hypnotic effects seem to be
steadying, don’t feel any sleepier. not very drowsy now, (had to think
a little hard to get the “drowsy word 🙂 ) but memory affected as seen
in the aside. i’m liking it better now, nice and sedating, relaxing too
ie muscles relaxant properties seem to be present as well.ah
yes..bitter taste…crept up into my mouth when i took a drink of
(plain) water. fudge. the polite term for fudge, not the taste. 🙂 the
taste is a vague metallic taste. i’m slouching now, muscles relaxing
and i could be drowsy if i wanted to (lie down, ligths off). quite
euphoric, i would say at least equal to hm…lemme think. it’s
definately not as euphoric as xanax…so hm…valium, i would say the
euphoria is consistant with valium + small amount of alcohol. 🙂
starting to get forgetful now, wanted to say something but forgot.
reading back did not help, i lost that thought. oh well. anyway, these
are 2.50 per pill. can you say ouch? oh it’s t+2 now and i remembered
wat i wanted to say. i wanted to say the feeling is kinda like having
my mind obliterated. there’s a “pressure” in my brain that makes me
able not to think about anything at all. wat i meant to say is…i am
no expert in the pharmacological aspects, but subjectively, this
zopiclone seems to work by, let me think of an analogy…forcing dried
(hard) prunes into a piggy bank while benzos work like inserting coins.
in other words zopiclone = brute force, benzos = nice and easy. i say
that because i feel DUMB you know, unlike benzos where the mental
functionality is not affected as much. t+ 2:30 now, not really drowsy,
but can sleep if i lie down in darkness and read a book. bye
did not sleep well last nite. did not sleep until t+12, sleep quality
wasn’t good too – freq awakenings etc. slight resideuakl hangover
eeffects. bitter taste still there 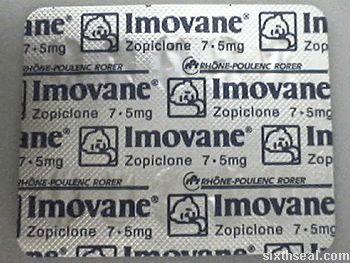 hit you on the head, a good sleeping aid, fairly good recreational
substance, pretty low for a social substance. sedation quite powerful,
prob coz not used to these class of drugs.felt like it was brute for ie
it does it work by having a huge fan in frount of you, forcing your
eyes open and the wind blows until you’re tired. can resist easily if
you’re a benzo tolerance person, but if you relax and want to sleep
(which is what thisi s for) yeah it works great as a hypnotic. no
better than some benzos, no less than some. can’t even compare to
antihistamines, those dun even put me to sleep. (insert babble about
OTC sleeping pills). the equivalencey charts i do not agree with, it
seems zopiclone is sedative at less than the equivalancey suggests. 6 x
7.5 mg sedated me much much more than equiv amount of diazepam, but of
course apple and oranges cannot be compared, just that i feel its not
very accurate. otherwise, its a nice drug, yeah can be recreational by
itself in high doses or to potentiate something (opiates, alcohol etc),
but on its own, fairly goood fairly good but the bad taste in your
month is a minus though. i guess can be social drug as well since it
reduces inhibition, but yeah its expensive. i would buy this again if i
need to sleep and i don’t have benzos on hand, or use them both
together (did that twice, nice potentiation too). good for sleep, good
for fun, lasts long, so you can stay up reading or whatever while
enjoying the hypnotic effects. its a good thing. but it causes
dependency as well, so yeah, bewaere. some ppl dun find this “z drugs”
to be recreational. i guess you really have to definre rec in that
sence. its recreational, it makes you sedated and nice so i mean its
recreational. good, but not great, considering the price. i won’t take
this over a benzo, but for sleep, i just might. doesn’t seem to be
cross-tolerant w/ benzos (check this before publishing). nice
zopiclonone.

I won’t put it in the same class as benzodiazepines, but it is a
good substitute, it’s better than nothing and it really decreases sleep
latency. Very nice for sleep (higher than recommended doses is needed
though, but this is from someone with benzodiazepine tolerance) and
quite acceptable for recreational use as well. Better mileage could be
had with generic benzodiazepines though, because zopiclone isn’t cheap.