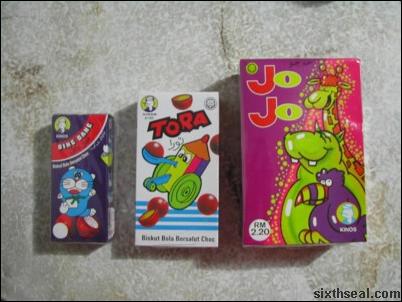 I saw those toy boxes that I used to play with as a kid when I went grocery shopping today.
Decided to pick up three different kinds and do a review coz I haven’t bought any in about 10
years. The three kinds are Ding Dang, Tora and Jo Jo. My dad used to get a box of Ding Dang for me
every Friday when I was in kindergarten. It’s something of a ritual for us, he’ll pick me up from
kindy and we’ll get a Ding Dang from the vendor right outside my school. If I’m not mistaken, the
toys in those toy boxes changes every week and the new stock comes in on Friday. I graduated to
Tora when it debuted, it has better toys, and there was a huge ad campaign on TV too during the
5:30 pm cartoon intervals. I haven’t bought this Jo Jo toy box before, but I know it came out
shortly after I outgrew these things. Interestingly, all three of these toy boxes are made by
Kinos. Their budget toy box is Ding Dang at RM0.60. Their flagship toy box is Tora at RM1.20. Their
premium toy box is Jo Jo at RM2.20. 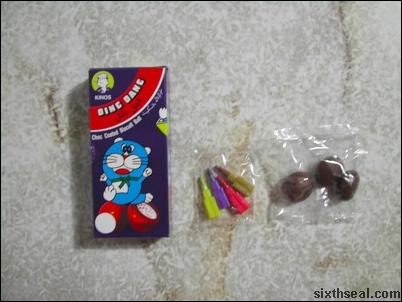 The smallest the three boxes, it contains a toy and a packet of chocolate balls. My girlfriend
shook the box when she saw it, which reminded me of the technique we used to find out if a vendor
is carrying the new stock or not. The advertisements during the week shows the new toy that is
coming out that week. Knowing approximately the size and weight of the new toy, we would shake the
boxes to deduce whether it contains the new toy or not. Anyway, it seems that the quality of toys
has deteriorated somewhat. This Ding Dang box comes with a detachable multicolored pen. There are
four mini pens of differing color and length, and it all fits together into one short pen, which I
reckon would be just right for kindergarten age hands. The packet of chocolate balls contains only
3 balls, which puzzled me, coz I remembered that it used to contain more in the old days. Oh well,
maybe my memory is failing me after all. 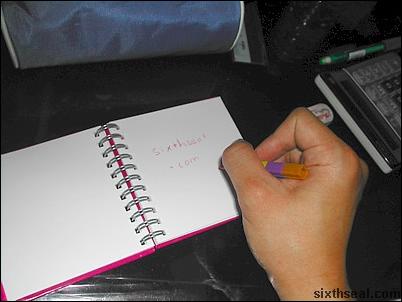 The Ding Dang toy in action. 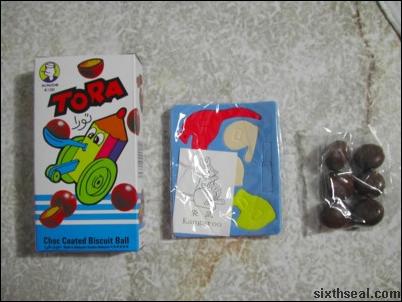 Tora also has a packet of toys and a packet of chocolate coated biscuit balls. The toy is of a
higher quality than Ding Dang’s. This box comes with a soft board and a round cardboard. The round
cardboard has stickers on it and several grooves on the sides. I think it can be flicked with a
coin, causing it to travel significant distances. I didn’t try that though, coz I didn’t think of
it until now. The main toy is the soft board. It has perforated shapes and you’re supposed to poke
them out of the soft board and combine the shapes into a kangaroo. It comes with a piece of paper
illustrating how the finished model should look like, but no instructions. The head of the kangaroo
has button eyes that actually move when you shake it. There are two spongy lumbars at the bottom of
the board to attach the legs and the arms to the kangaroo’s body. Interesting toy, but not as good
as the old boxes which contains toys of a more kinetic nature. The Tora toy before assembly. 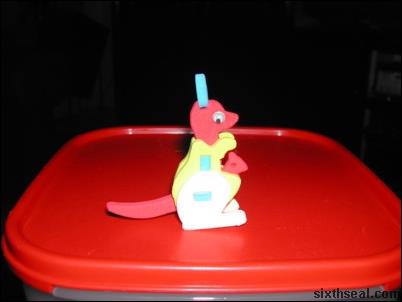 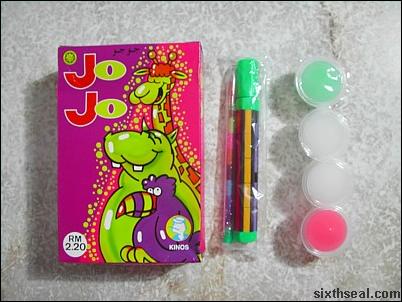 I was kinda disappointed by the contents of this box. As usual with toy boxes, it has a toy and
a confection. Being their premium toy box, I was expecting a more complicated toy, instead of just
two pens. The first pen is a fat one which has five revolving compartments in it’s main body. One
side of the pen has one less slider, making it possible to move the remaining sliders around to
give rotational capabilities to the compartment in question. It’s sorta like a Rubik’s cube, I
think it’s supposed to be a puzzle as well when the colors are jumbled. I cannot vouch for the
writing capabilities of the pen because I did not try it. My girlfriend tried to write on my face
though, but there wasn’t any marks on it when I looked. Either she didn’t really press down or the
pen does not write well on skin. The other pen is a multicolored one with lots of inner nubs. You
can switch the nubs by taking out the frontward one and pushing it into the opening at the back of
the pen. This forces the other nubs to propel forward until the second nub is the first. The build
quality of the pen is dismal, for the cap promptly cracked when I capped it on the top of the pen.
The confectionary is different from the other two boxes though. Instead of chocolate covered
biscuit balls, this one has four jelly cups. 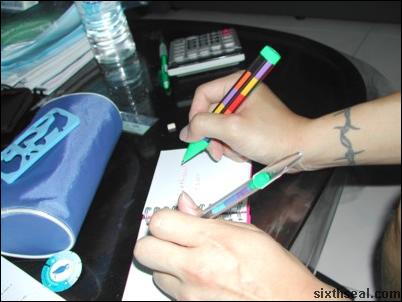 For some reason, doing this review has made me somewhat sad. Nostalgia?