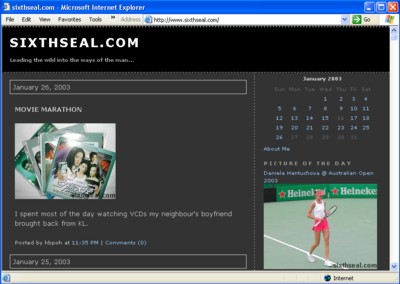 I changed the Cascading Style Sheet because I was caught in a wave
of dysphoria while looking at the old one. The spice extends life. The
spice expands consciousness. This new one looks cleaner, nicer. I am
afraid of Track #6. The “All hail The Creator” one. The Creator cometh!
Whose pupils are dilated? Is it yours? It’s gotta be yours, coz it’s
not mine! The little fan sits on the little bed and spins its little
blades. Flange flange flange. Nevermind, lah. Ting ting ting, bells a
ringin’. Hlp, I’m drownd. That was from Bag of Bones. One two, buckle
my shoe, three four, shut the door, five six, pick up sticks, seven
eight, lay them straight. London bridge is falling down falling down
falling down. London bridge is falling down. My fair lady. Please
define. You better do it soon, because the stick is very angry. hahaha
Erm…yes.

A haiku:
Rice is long and grain
The small grains are sun and soft
Bring me to a boil

The lid of a rice cooker is his hat. Please don’t take it away. It
needs the hat to shade himself against the sun. Why is a passport a
passport? Hmm…something to think about eh? Or not. I don’t give a fuck
either way. If you want, think about it. If you don’t want, fuck off,
no one is pointing a gun to your head and forcing you to do anything.
Just remember Bi-Lo, where there is extra value for YOU! Yes, you heard
me right! Extra value, just for YOU!

I’m going to throw up. Delirium, schizophrenia with a unique 3D
shape. Urg. Knock knock knock says ICQ. Three times lucky, says OCD, my
friend Obsessive Compulsive Disorder. Whoever he is. Quick review, I
feel a need to write. The smallest things are significant. And the
fnords are everywhere, don’t you think otherwise. London bridge is
falling down, falling down, falling down.

Everytime I go to the toilet I feel an urge to puke. 755-25-25 Pizza
Hut Delivery! PLUR. Peace Love Unity Respect. An overturned saucepan
with boiling hot margarine on the floor. Floosh floosh floosh. Intense.
Saucers. Not the flying kind. It’s so powerful. Oh my God, It’s really
so powerful. What a powerful mindfuck! It’s a Teacher! Man, it’s so
crazy over here. So crazy…