I had a meeting today with my IE client and our project has finally
been signed off. It’s a culmination of a year’s work and it was kinda
sad for things to end, strange as it may sound. 🙂 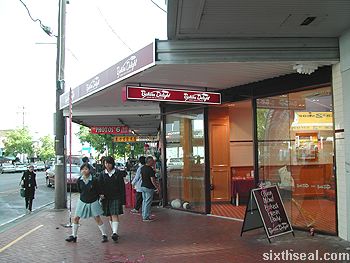 Anyway, I saw that Bakers Delight @ Clayton is finally open to the
public. I just got a hot cross bun, and it was pretty good. They were
offering samples of bread on the counter too. 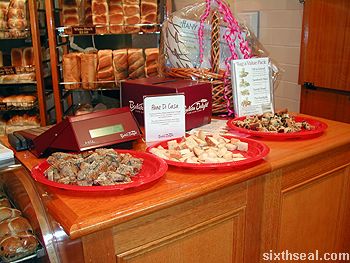 Well, I’m feeling strangely sleepy now, so I’ll just be quick and
tell you a funny conversation I heard while on the bus. Anyway, there
was this group of Malaysian people sitting around me. I don’t know
them, but I overheard their conversation mentioning they’re from KL.
It’s impossible not to when some of them were opposite me and some
beside me.

Anyway, this guy (looks Malaysian as well) comes in at the bus loop
at Monash University and sat beside the Malaysian girl opposite me.
After a while, he struck up this conversation with the girl:

Guy: Are you Malaysian or Indonesian?
Girl: (looking disinterested) Malaysian.
(looks away again)
Guy: I figured you were. You had a typical Malaysian accent.
Girl: (looking annoyed) I’m Malaysian so of course I have a Malaysian accent.
(her friends around laughs)
Guy: Yeah, you have a very distinctive accent from which I can tell you’re Malaysian.
Girl: (looking very annoyed) I’m proud to be Malaysian.
Guy: Hey, so am I.
(extends hand)
Girl: (considers for a moment then the auto-reflex kicks in) …
(she didn’t say anything in reply)
Guy: (insistent) So, where do you live?
Girl: Halls.
(looks away)
Guy: Which hall?
Girl: (looking at her friends for help) Ah…this is my stop.
(starts to make a show of gathering her plastic bags while avoiding eye contact with the guy)
Guy: (not to be dissuaded) What’s all that for? Is that your daily shopping or what?
Girl: It’s for a week. And some are for friends.
(looks away)
Guy: So what are you into? Alcohol? Drugs?
Girl: Nothing.
(gathers her shopping bags and gets up, the halls stop is there)

Heh. It was funny how that guy was going on like that. I figured he
didn’t start the conversation on the right foot, but he was also the
annoying type and he couldn’t afford to be that without scoring high in
the looks department. But I reckon it’s the “Malaysian accent” thing
that did him in. I heard the girls bagging him while walking into the
halls. I didn’t know them though, they’re from a different hall, but
that conversation sure was funny. Heh.