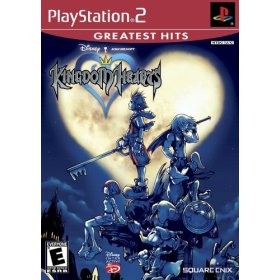 I have been playing a lot of Kingdom Hearts for the PS2 lately. I know I’m slow, but I like to do things in sequence – I’ll play Kingdom Hearts on my PS2, then Kingdom Hearts: Chain of Memories on my GameBoy micro before playing Kingdom Hearts 2 on the PS2 again. I’m a big fan of Square (now Square-Enix) RPGs and the fusion of the Final Fantasy worlds with Disney worlds is amazingly appealing.

I’m up to Hollow Bastion now, finished the first trip to it and am trying to beat the optional bosses. I’m working on Kurt Zisa in Agrabah – I’m Level 59 and I nearly kicked that mecha looking boss in the desert’s ass (Blizzara works great as well as the Ragnarok ability – if you can hit him with it – it really drains the HP bar). I woke up at 2:30 am last night and gave it three more tries – nearly did it once, with the help of Tinkerbell (the Summon – essential to keep you alive) before going to sleep again.

Kurt Zisa got me thinking – it was a fan contest to have an optional boss named after him/her and a Caucasian or Jewish sounding name would probably be alright since it melds with the theme of the game, but what if I won? The mecha desert boss name would be Poh Huai Bin which wouldn’t fit into the general naming scheme and theme of the game. The same goes for most Chinese and Japanese names so I was wondering…do they filter out certain candidates?

Anyway, just some nonsensical “first thought of the day” thing, I’m actually really busy these few days with work so forgive the lack of updates. I’ll make up for it – promise. Cheers!