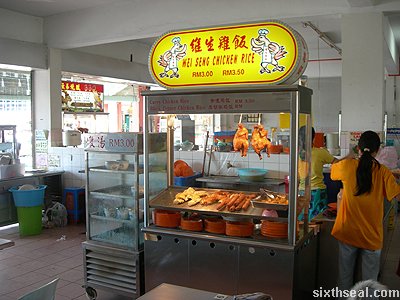 Wei Seng Chicken Rice is a chicken rice shop located at Tabuan Jaya at the food court beside Choice Daily. It also boasts a repertoire of double boiled Cantonese soups in a heating element beside it which the proprietors actively promote. 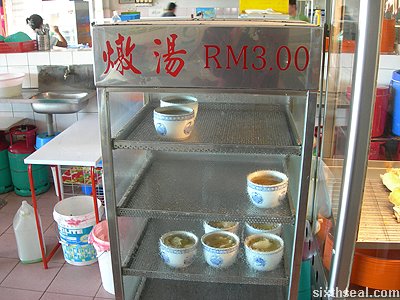 The double boiled Cantonese soups (broth) is held in traditional deep ceramic bowls and kept warm in a similar contraption to the double boiling method used to boil the soups. I was told that the soups have been prepared for as long as 24 hours for an authentic slow-boiling Cantonese soup. They have a lot of different soups on offer, ranging from Bitter Gourd soup to Ginseng Chicken soup. 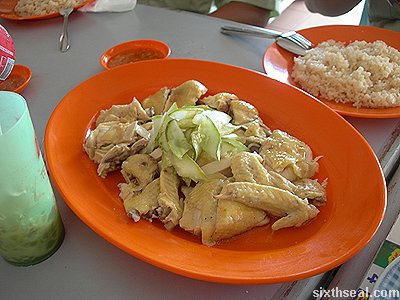 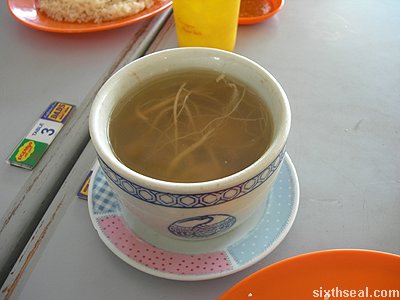 Their double boiled Ginseng Chicken soup (RM 3) tasted good though. It has visible strands of ginseng floating inside and the broth is fairly clear (as all good broth should be). There are several chicken pieces inside and this place seems to subscribe to the less-is-more school of thought as the soup only contains ginseng and chicken. 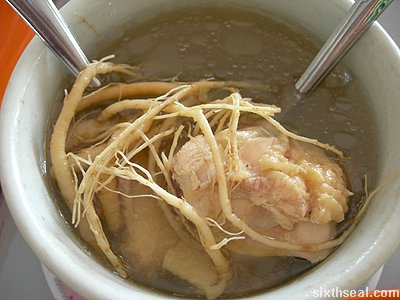 The Ginseng Chicken soup is a nice complement to the chicken rice – I ended up having two plates of rice. The ingredients in the soup are tender, with an almost melt-in-your-mouth texture to the ginseng. I would recommend this place for their RM 3 double boiled soups as it is hard to come by outside restaurants here. It’s best to go early as the soup seems to sell out really fast.