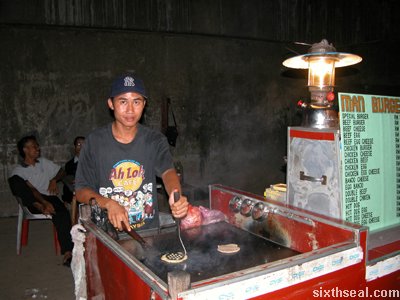 This is Man Burger, a burger stall under the Satok bridge. It
remember that a bunch of us used to frequent this place for it’s fabled
RM 1 beef burgers when I was in college here. It was a bargain. I used
to attend Inti College in Kuching…come to think of it, I went through
two high schools and three colleges (apparently, I wasn’t exactly a
model student). I re-visited the stall again last night, with the same
bunch of friends and I sadly report that the RM 1 burgers have ceased
to exist. 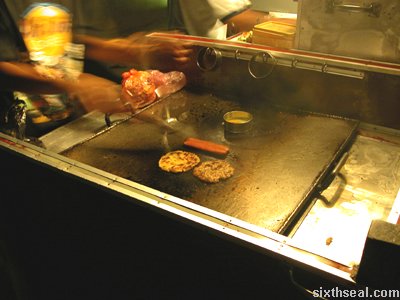 Thus, I decided to opt for the largest (and most expensive) burger – the manly Special Burger – an extravaganza which has beef patties, chicken patties and sausages with egg. 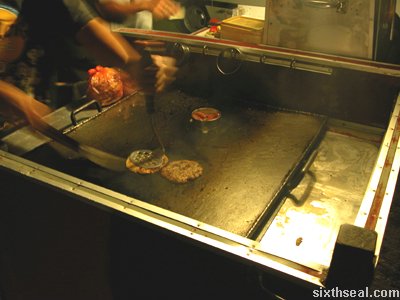 The interesting thing about burger stalls here is that they all have
different implementations e.g. different sauces, methodologies and
such. This one cooks the egg a la egg banjo, i.e. in a round steel
container instead of spreading it out into a large thin egg which folds
in everything. They also cut the sausage into small bits and put it
into the cooking egg so that it solidifies around it. Nice. 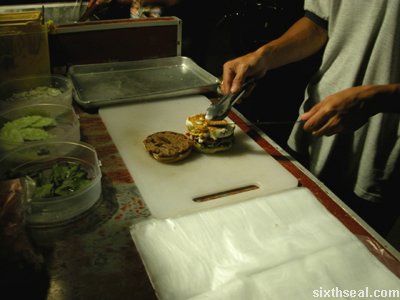 The manly stack is placed on a butter grilled bun with lettuce, cheese, tomatoes, sauces and the kitchen sink. 😉 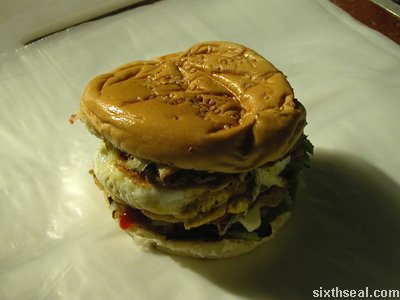