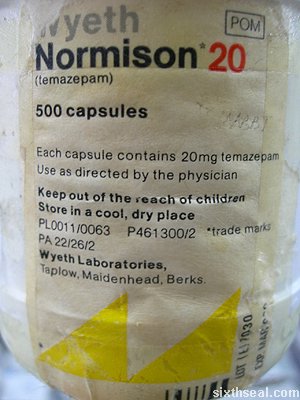 Normison 20 is a preparation by Wyeth which contains the benzodiazepine temazepam in liquid gel filled capsules. This is the infamous 20 mg gel capsules that gained notoriety in Australia amongst heroin users for potentiating the effects of their favorite opiate intravenously. Normison in gel capsules have been taken off the markets due to rampant abuse in certain drug communities via injecting the liquid contained inside the capsule by drawing it out with an insulin syringe.

Naturally, the very idea of injecting gel with the viscosity of syrup (the medical fraternity refers to it as “liquid goo”) sounds off-putting to most opiate users, even the ones slamming black tar heroin. However, “jellies” or “footballs“, as it was known on the streets has ascertained the infamy of having a high second to none when injected with heroin. It was very much sought after both to potentiate heroin and also to replace heroin during the draught of 2000 in Melbourne. 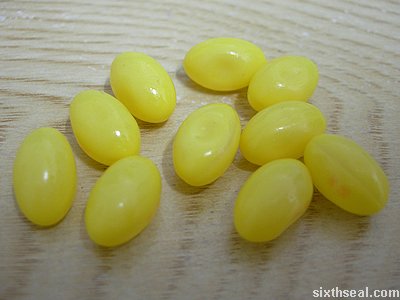 I managed to obtain some old stock of Normison 20 (which was kept in a fridge) that still has much (if not all) of it’s bioavailability present and I considered administering it parenterally before deciding against it since I already have one collapsed vein from my methamphetamine use days. Thus, I took it orally and opened up some of the capsules to investigate the gel filled Normison soft caps. The gel (syrup) inside is yellow and slightly bitter-sweet and it tastes rather medicinal – it reminds me of a clinical setting.

Temazepam has been reviewed on sixthseal.com before and I have nothing much to add to it – temazepam is a fast acting, short half life, hypnotic benzodiazepine so that should give experienced benzodiazepine users a note on what to expect. It’s very weak compared to recent benzodiazepine structures, with equivalency charts giving a figure of 20 mg temazepam to 10 mg diazepam. 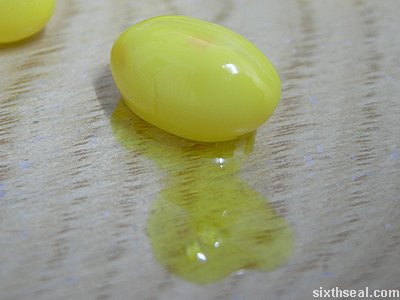 The most interesting aspect of temazepam is the strong hypnotic properties, which is noticeable after a dose of 220 mg. The same dose with Oxycodone 20 mg (insufflated) produced a very nice nod that would probably simulate what the infamous opiate-benzodiazepine cocktail of heroin and Normison gel capsules produced with a different route of administration and with pharmaceutical agents.

Temazepam is very fast acting, with noticeable effects within 30 minutes and an equally short half life (approximately 4 hours) which would coincide with the properties of heroin (also a 4 hour duration substance) which could probably explain the popularity of Normison capsules amongst heroin users (with pharmacies reporting robberies where the robbers demanded ONLY Normison capsules).

However, it just doesn’t hold up with the hypnotic benzodiazepine agents available today such as Dormicum (midazolam) although personally, midazolam has lost its hypnotic properties for me and puts me into a strange wakeful state instead, but that’s another post. Temazepam however, is a very fast acting hypnotic benzodiazepine, which explains its popularity amongst opiate users seeking the perfect nod.