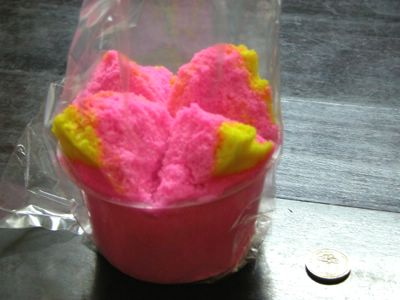 This is definitely the largest cupcake I’ve ever seen…used to eat
them when I was young, they were purely white then, but the colored
varieties do pop up once in a while. They all taste the same though. I
got this at Bangsar pasar malam just now. I haven’t seen one that comes
in such a big variety before and two of us couldn’t finish it. It’s
pictured next to an RM 1 coin, but it doesn’t seem to show the scale of
the big cupcake well. It’s about 3-4 times bigger than the normal sized
ones and it’s in a large plastic container base. 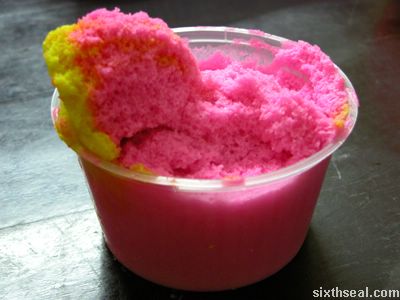 Anyway, when I was young, I would only eat the top parts – the four
soft chunks on the top and leave the bottom part for someone else to
eat, which usually would be my father. I did not like the crumbly and
relatively hard base – only the soft top then. Strangely though, this
variety goes against the soft top – hard base mould. The bottom of this
is softer than the top and the top chunks taste like the bottom of the
normal ones.