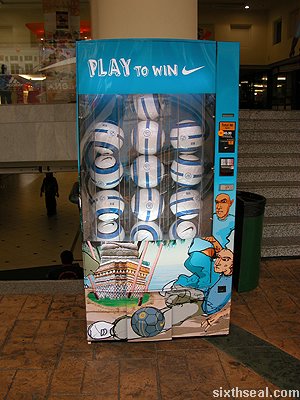 I have to say, this is the first time I’ve ever seen a football
vending machine…this is the Nike “Play To Win” football vending
machine in front of Sungei Wang Plaza. I’ve seen the Nike commercials
on TV – the Play To Win series of ads. The most memorable one was the
forest scene with a guy playing solo football (or soccer, if you like)
where he scores and the wind going through the tree leaves sounds like
stadium applause and it ends with the tagline – “Play To Win”. 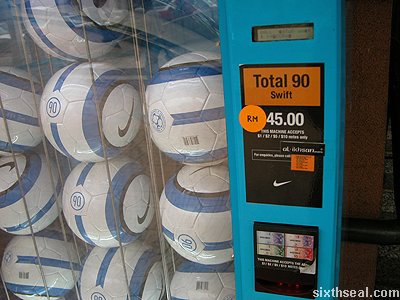 These are the exact same footballs from that commercial. It’s the
Nike Total 90 Swift soccer ball series and the vending machine has
about 20 of the footballs going for RM 45 each. There’s a slot for
inserting RM 1 to RM 10 denominations and presumably, a football will
drop down from the vending machine into the flip up receptacle at the
bottom. I didn’t have a spare RM 45 to find out, but I would project
that as the likely scenario, since it’s a vending machine.

I got a HP iPAQ hx4700 just now for RM 2,300. The retail price was
RM 2,488 and I probably could have brought the price lower, but I was
in a good mood, the shop has just opened – it was the first sale of the
day for the commission based attendant. She was happy about it,
probably made her day, so I didn’t mind. Passing it on and all that. 😉