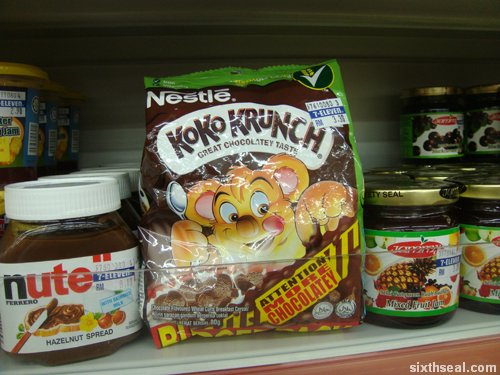 The new guy wolfed down the Koko Krunch (a sweetened cereal) with the milk his parents brought him as though afraid we might grab it from him and have it for ourselves. We had formed a pretty nice and tight clique by this time, the only ones with cigarettes inside the center. Fong with the money, Ming with the means, Seng with the might and me.

I don’t know why they took a liking to me, to be honest. I was tough, and showed it when confronted the first time I went in. Respect? I asked at the end of my stay and it turned out that they found me “different” and “interesting”. I’m not the usual type found in drug rehabilitation centers. I’m intelligent and possess a certain charm that got us away with little more than a slap on the wrist from the center’s administration.

Different – that’s the quality that got me into the crème de la crème clique.

We have been watching the new kid for a while now; inmates tend to regards the newbies with more than a little suspicion, if not downright hostility. He doesn’t share his goods and eats his bowl of Koko Krunch TOGETHER with the center’s ration of noodles (for breakfast), rice (for lunch) and biscuits (for supper).

It’s a cardinal sin according to the law of the jungle, I mean, rehab.

He probably sensed our hostility towards him and made overt attempts to get back in our good books. He knows we’ve been smoking and wanted in. He has nothing to offer in return (and neither did I, and to this day I still wonder why I was invited in the first place) and his selfish acts did nothing to gain our favor. He’s also a methamphetamine user – as most of us in there are.

I think he figured out our rules the second time his parents visited him, bearing gifts of two extra large boxes of Kellogg’s Chocolate Frosted Flakes and 2 liters of milk. He quietly arranged five plastic bowls on the table after lunch and opened all two boxes and started dividing it into the five bowls.

Ming: What are you doing?
Newbie: It’s my treat, I want you all to have this too.
Fong: Never heard you say that the first time your parents gave you stuff.
Newbie: Well…now that I’ve gotten to know you guys better…
Me: I don’t feel like I know you at all.
Seng: Yeah, and don’t think we don’t know why you’re doing this. You want in on the cigarettes right?
Newbie: No, it’s not that at all…though it would be nice…

We proceeded to help ourselves to several bowls of the stuff. He only ate a single lonely bowl, taking care to choose the one with the least cereal inside in a last ditch attempt at establishing good will.

We never invited him to either our afternoon or night contraband cigarette breaks.

The rule of the jungle…

You’re either the pack of hyenas, or you’re the dead carcass.