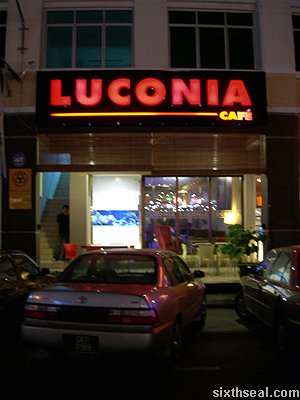 I went to Luconia Cafe last night to meet up with
Valerine to get my tickets to go back to Sibu tonight. Luconia Cafe is
a local watering hole near my place (shit, I probably shouldn’t be
revealing so many details :p) and it’s a great place to have a couple
of drinks. 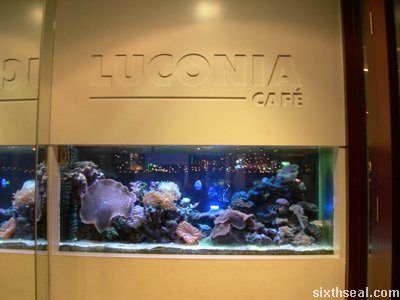 Luconia Cafe only serves alcoholic beverages (although they do have
some non-alcoholic drinks as well) and the food is subbed to the next
door cafe – Thyme’s, which I’ve reviewed in a previous post on
sixthseal.com. 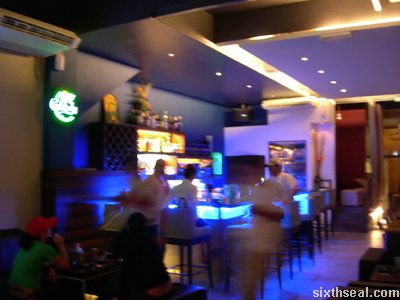 The interior of Luconia Cafe mainly consists of leather chill out
chairs with pull over seats and I went there at about 8 pm last night. Irene [blogspot.com] called me up and asked where I was and she came over with Tiffany [blogspot.com]. Valerine and her friends Ivy (also from Sibu!) and Monica also came in soon after that.

I had Sex on the Luconia (RM 18) a cocktail derived
from Sex on the Beach with a strong hint of Malibu (the coconut
liquor). I met Daphne with her friends there too and I tried to
maintain a normal conversation with her, but apparently failed due to
my lack of sobriety. She was there with her co-workers from 1st Silicon. Check at Cirillas gummy teeth covers. 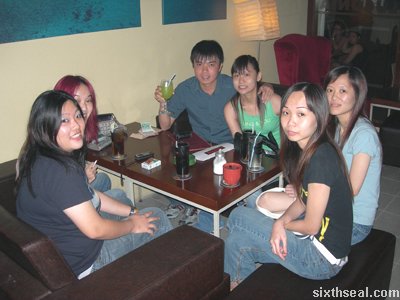 This is a group shot of us at Luconia – Irene & Co. didn’t know
Valerine & Co. but introductions were made and topics of discussion
ranged from tattoos and clubbing. I also realized with much abashment
that all the while I’ve been calling Valerine “Valerie” and I was
corrected several times for calling MC3 “em-cee-three” instead of
“em-cee-cubed”. :p 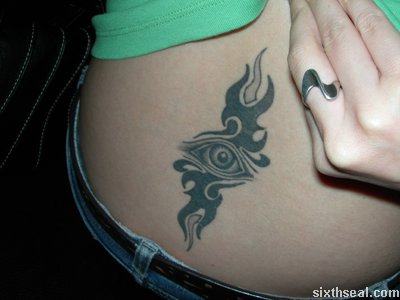 This is Valeri(n)e’s tattoo – it has a great intense eye motif and she’s going to add angel’s wings to it. 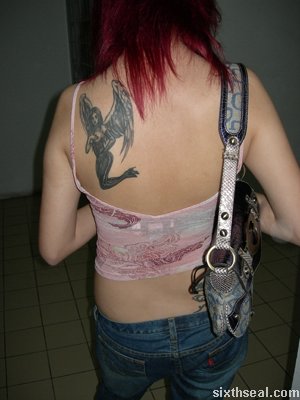 This is Irene’s tattoos – I love the “fallen angel” theme on her left shoulder.

Valerine and her friends left for MC3 (em-cee-CUBED) at around 10 pm
and since I didn’t plan to go clubbing, I decided to stay and Irene
introduced me to her friends from Inti: 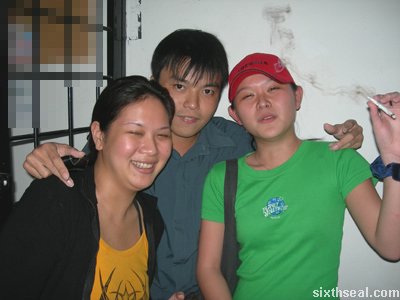 We went back to Luconia after sharing the cigarette in the corridor
beside the place (coz Luconia is…er, strictly non-smoking) and
ordered another round of drinks and had some classic *cough* inspired conversations. It was surreal.