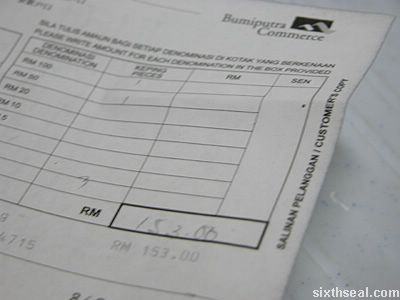 I just got a Western Union money transfer totalling RM 153 for
excess bandwidth charges during my lunch break today. That’s more than
10% of my monthly paycheck…of course, like I said before, everyone is
welcome here at sixthseal.com. 🙂 It’s just that I have to figure out
how to reduce the monthly bandwidth usage.

Anyway, as you can see, I’ve changed the front page to display only
6 days back, but there’s a lot of photos on my page – it’s been part of
my weblog since the inception – at least one relevant photo with every
post. It’s why I stuff my Nikon 885 into my pants pocket in the past
and it’s why I sling my Nikon 5700 everywhere I go now. I don’t want to
break the feel of that, and the (barely updated) Picture of the Day has
also been with sixthseal.com since the beginning and I don’t want to
change that either.

Well, if anyone is interested, I’m allocated 5 GB transfer per month
and I pay US$ 5 for every GB after that. At the rate visitors are
coming in, I’ll have to do something before the bandwidth bills becomes
exhorbitant. I’ll discuss with my host if it’s possible to open another
account and register another domain and integrate them, as in allowing
each account to use bandwidth from the other – effectively having one
account with 10 GB transfer. As veritas is fond of saying, RM 153 is
153 mg of generic alprazolam (Xanax). 😉

Anyway, I got the Western Union money transfer done during lunch
hour at the Bumiputera Commerce Bank at Komplex Antarabangsa (or is
that Plaza Antarabangsa), which is just beside the place I work –
interconnected internally. I happened to notice some workers wearing
“BCB Penipu Pekerja” (BCB shafts their workers), some sort of protest
going on here.

Second day at work was much better than the first, at least I have
something to do, keeps me occupied. Strange thing is, I woke up at 6:15
am yesterday and arrived at 8 am and I woke up at 7 am today and still
arrived at 8 am. Very puzzling. Anyway, at least I didn’t have to do
battle with the Bukit Bintang/Jalan Pudu rush hour traffic and
unwilling taxis today – our senior programmer Wai Hing was kind enough
to send me back.

Well, tomorrow is Thursday so I will investigate the Bangsar
connection after work…will probably take a taxi from Bangsar LRT
station and then try the buses on Friday (coz Fridays means no work the
next day, unless I have unfinished business). That would be my mode of
transportation from now on. I’m still going to take a taxi in the
mornings though, until next week when I’m sure of the public
transportation routes to take the bus/LRT combo.

I’m going with my gf to eat that 6 cheese pizza by Pizza Hut and the
Haagen Daz mooncakes this Saturday. I need to go to Low Yat anyway
because my over enthusiastic insertions broke my mouse’s P/S 2
connection. I’ll also need to pick up a pair of headphones. Right,
enough rambling, I talk too much when inhibitions are reduced. 😉

Oh, right, I couldn’t even see the moon, much less Mars. It’s way too cloudy and the street lights are in the way.

My apologies, I feel extremally sleepy right now. I will reply every
single comment tomorrow either before office hours (will go early) or
during lunch break. Thanks for understanding…haven’t been getting
enough sleep lately.