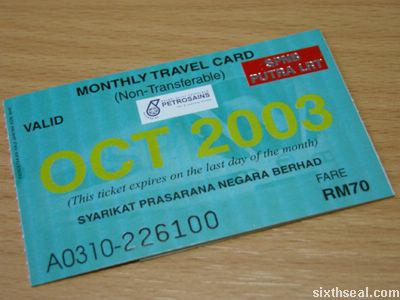 Goodbye October 2003. This is the 31st of October, the last day of
October, Halloween and the day Dr. Mahathir steps down as the Prime
Minister of Malaysia.

1. Dr. M is stepping down. I don’t talk about politics much due to
paranoia, but people who know me in real life know that I’m a staunch
supporter of Dr. Mahathir. He’s not afraid to speak his mind and he
doesn’t give in to Western influence. He’s someone who has BALLS for
the lack of a better term.

In contrast, I particularly dislike people like PM Goh Chok Tong of
Singapore. To put things crudely, he kisses every Caucasian and
Japanese ass that heads his way. I wonder if he wishes he was born
Caucasian sometimes.

Now Dr. M on the other hand, he’s not afraid of voicing his opinions
about the many infringements of the US and Australia against Asia. I’m
not going to go through everything because I don’t want to be seen as a
hardliner, but I’m sorry to see Mahathir go. Let’s hope that Datuk Seri
Abdullah Ahmad Badawi will continue Dr. M’s legacy.

We’re a sovereign country and we’re not going to take any shit from Bush, Howard or anyone other than our own people.

2. Google Dance. Yes, Google just did its thing recently.
sixthseal.com is still a PR 5 due to “spammy” site design (namely, the
persistent sidebar). I had hoped for a PR 6 this time. However, my
SERPs are still holding strong and I’ve captured certain keywords I’m
proud of. Heavy pimpage of castitas.com has also raised that site to a
PR 4, as I expected. Did you know that there’s a link to castitas.com
on every page of this site? 😉 I was expecting a PageRank of 1 less
than sixthseal.com and yeah, I got it. 🙂