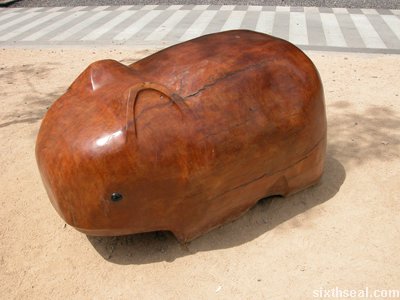 Did I say profit? I meant traffic. 😉

Peace be with you, sister in Christ. Now that we’ve got the
formalities out of the way (don’t believe we’ve been introduced), I
would appreciate it if you could spare a couple of seconds of your time
to address an issue regarding a comment posted in the weblog mental jog at (http://jogalong.blogspot.com).

I would like to highlight the entry made on the 4th of February, 2005 with the title yo, come let’s drink tea!
(Permalink:
http://jogalong.blogspot.com/2005/02/yo-come-lets-drink-tea.html), in
particular the first comment in the comment section, if you’ll be so
kind as to refer back to it.

The entry in question focuses on an upstart forum called LimTeh.com (LimTeh.com is a sixthseal.com
venture). I believe that the first comment was written by you, or
person(s) using the “lilian” nickname with a back link URL pointing to
(http://lilianchan.blogspot.com/).

I navigated over to the weblog in question and was informed that This blog has moved to http://chanlilian.net/.
I proceeded to the URL and arrived here. You must be wondering what
great news I must be carrying about our Lord Savior, Jesus Christ, to
have traveled so long and far, and to that, I say…there is none.

He did remind me that it’ll be His birthday again in nine months,
and told me that I had better get him something stronger than wine if
I’m to be considered for the Heaven Guest List, but that’s it.
Hmm…come to think of it, he did sound kinda judgmental and rather
unlike his usual forgiving self, but that could be coz of the
drinking…

I digress. I did not come here with glorious news of the divine
nature. It’s something more earthly that I’ve traveled thus yonder to
share with you.

QUOTE
Lucia
I hope you will exercise your wisdom over there because as I see it, it
has undertones of substances abuse. I can’t be sure but you are free to
ask around from our wiser and more established forummers. Go on, jump
on me but I have to say what I have to say.
UNQUOTE

The off-handed remark and pre-assumptions which is cocooned within
the barbed comment really…er, hurt, my feelings. For a moment, it
felt like there was sand in my eyes, and maybe there was, with the
construction going on outside…and the word “forummers” really did
hurt my eyes. It’s a piercing sort of pain, like it’s telling me that
there’s too many m’s. I’m sorry, but that’s what happened.

It also made me feel like my heart was being slowly shredded apart,
with each word that flashed before my eyes, but perhaps that could be
attributed to sympathomimetic induced cardiac dysrhythmias…yep,
nothing feels like tachypnea and tachycardia with a dash of
intracranial pressure in the morning. It just wakes you right
up…works like magic…okay…right, I will stop pretending to make
sarcastic comments disguised as small talk and get to the point now.

I appreciate the fact that you’ve voiced out your personal views and
I absolutely agree that you have a right to speak out. Now, if you’ll
allow me to reciprocate, I must correct you on several factual
malfunctions in your comment.

1. The LimTeh.com forum does not have “undertones
of substances (sic) abuse”. I ABSOLUTELY RESENT the negative
connotations loaded in that phrase. I would like to correct you, once
and for all, and make it clear that the LimTeh.com forum neither
condones nor discourages substance use. Instead, the practice is embraced.

2. I would like to compare notes with you on the second rebuttal
before making a statement, because I would not think of making
assumptions about you, but wtf, we haven’t got all day, so, getting
right to the point, I find the phrase “wiser and more established
forummers” to be offensive and derogatory to me.

Please allow me to get on my moral high horse and make the following statement:

I would not think of making assumptions or judgment calls against you, lilian, because I don’t know you in person.

Now, as I dismount the virtual horse, I would like to convey the
urgency of time by discreetly glancing at my watch and concede that you
are probably wiser than me, due to your…seniority, shall we say?

The part I will have to check my facts (people still do that in this
day and age, you know) is the bit regarding being an “established
forummer (sic)”. LimTeh.com is a proof of concept venture launched
recently, so if that’s what you’re referring to (which I know you’re
not, I just wanted to clear all bases), so it’s only been online for a
couple of months.

I have to remind you that chanlilian.net does not have a forum to
form a basis of comparison though, which renders the statement
completely invalid and pushes it into the domain of a self-serving,
self-righteous, masturbatory statement. I really hope you don’t have a
forum, coz I didn’t check and I would look like a total ass if you’ve
been running one for decades (which is technically possible, with you
being a mother and all, I plan to keep my blog going for decades too).

Nonetheless, I believe that’s not what you’re trying to convey due
to the language semantics (oh, btw, don’t mean to be a Grammar Nazi,
but substance doesn’t have an s suffix). I get the impression that
you’re referring to forum participation…and this is where I have to
solicit your input.

I have been actively involved in forums/BBS/newsgroups/mailing lists (now that was old skool) before 1993.

The above statement is:

TRUE
I have no more questions. You are the old skool master and the title
“established forummer (sic)” is rightly yours, as befits your (insert
euphemism for age before posting, don’t forget now, no cheap blows). –
Oh no, I forgot! Sorry!

FALSE
I’m afraid that I’ve been involved in BBS since 1993, using a dial-up to call BBS systems around the world. Yes, we needed to pay the international call charges. It was fun at that time.
I’ve also been active in various mailing lists, and was a moderator and
compiler (weekly digests) for several in 1994 and I also got into
newsgroups at that time (which, I’m ashamed to say, mostly involved
alt.binaries.sex).
I have also joined various forums throughout the years as my interests
change and have been around long enough to know I don’t have to jump at
my own shadow at any hint of academic discussions on topics of questionable legality (God Forbid!) due to the existing protective legal framework.

The point of this entire dick sizing exercise (which is rather
pointless, considering I’m the only male here) is to communicate my
indignity at this attempt to challenge my experience. I’m just kidding,
I’m not actually indignant, nor do I care about all this, I just have a
lot of time on my hands.

Well then, sorry for being an asshole, no hard feelings, all in good
fun, blah blah, and all that. I realized that I have other things to
do…but! But, but, lilian, my sister in Christ, I always have a spare minute to share the word of Christ with a fellow Christian.

I’m dusting my worn copy of the Scripture now and there’s a very wise paragraph that goes “Judge not, lest ye be judged yourself.”

It says “You hypocrite, first take the plank out of your
own eye, and then you will see clearly to remove the speck from your
brother’s eye.”

Jesus, the Bible can be a bit harsh, eh? Hypocrite might be too
strong a word. However, that doesn’t invalidate the general lesson.
It’s a very simple concept actually. In fact, it can be distilled down
and still retain the message.

I just felt like sharing that piece of scripture with you. It’s so easy to forget the holy gospel in this day and age….

Peace be with you always, and God Bless! Thank you very much for your time.

Sincerely yours,
Poh Huai Bin
Chief Operations Officer
Department of Social Manipulation, Coercive Persuasion and General Bad Influence of a Vague Nature
(commonly known as The DEPT of S&M and CoPu(lation))
“Where we turn tabula rasa into tabula rasa.”

Postmortem: The flame wasn’t concise enough, and
this is compounded by inconsistent wit. This makes for rather dry
reading, which is the opposite of what a good flame should be – think
barbeque and steaks, juicy and irresistible. Certain parts should be,
in retrospect, left out, as a four page flame is really overkill. I got
bored of writing halfway. It’s a good thing I had an ending ready, or
it’ll be one of those tapering off, half assed flames. 😉

Rasa means “feel” in Bahasa Malaysia. I shouldn’t have to explain,
spoils it, but unless you skim read, you should have either got it or
didn’t, so for those who didn’t…it’s supposed to mean “Where we turn blank slates into feeling slates”.
The word “rasa” is slightly more intense than “feel”, so it’s more in the context of “feel me?”