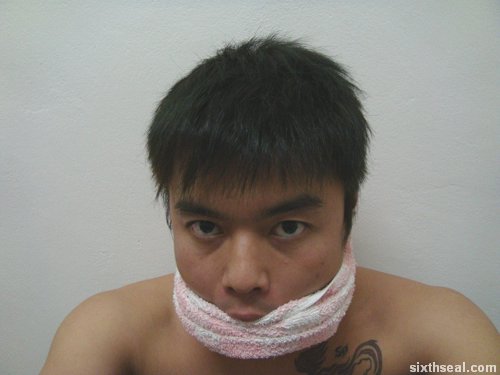 I have been doing a lot of thinking lately about the direction this blog is going. The recent two controversial posts – the thinly disguised “human advertising” post and the profanity laced Dear Aries confession has received a lot of negative feedback from people I care about. I talked to one of my friends about this issue – he’s about the only one detached from the blogging scene to be able to give impartial comments and thought really hard about what I should do. 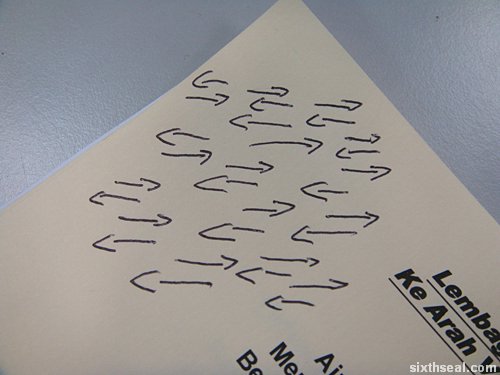 This is what I tend to doodle when I’m thinking about the direction I should be taking. I ponder the pros and cons while drawing opposite arrows. 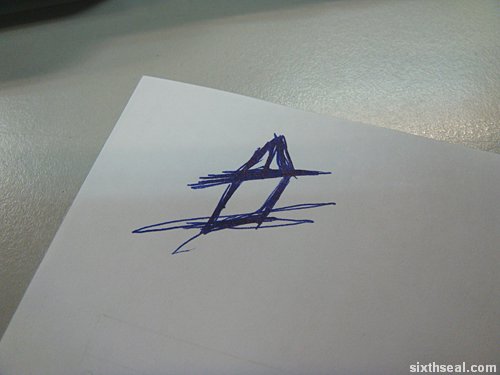 I also found myself drawing this house/witch’s hat thing when I was particularly stressed out. I’m sure psychiatrists can make sense of my feelings from analyzing that, but I usually just draw this when I’m worried or stressed:

It looks like a zipper, a friend of mine told me. I’ve never thought of it like that. I am always thinking of teeth when I sketch that. It’s supposed to be the upper and lower set of teeth.

Anyway, astute readers would notice that several posts have been discreetly unpublished during the last week and I’m going to do the same to the two “controversial” posts as well. It’s not an easy decision to make but one thing my friend shared with me really hit me hard.

How long are you going to be the bad boy? Beh sian meh? (Hokkien for “It’s getting old”).

I must admit that a lot of my early inspiration was CKY and Jackass and I noticed one particular thing while watching Jackass 2.5. Johnny Knoxville looks really old. It was revolutionary when it came out, but the Jackass franchise is a little like flogging a dead horse. It’s fun to watch once in a while, but only in small doses. I can’t keep on doing this stuff all my life, even with the self-destructive tendencies that gets out sometimes and I shouldn’t burden unwilling readers with them.

Thus, I’ve came to a decision:

sixthseal.com is going to branch off – there will be a new domain for personal and “controversial” posts, made available to friends only. This blog (sixthseal.com) will be maintained as the main(stream) site while the other domain will be limited to sporadic and occasional posts, much like the castitas.com arrangement back then.

No worries though, the main content will always still be at sixthseal.com since I don’t do much controversial posts anymore anyway. I *heart* sixthseal.com and I can never let it be anything less, so the other domain will always be on a lower priority and will only be updated very rarely.

It will be password protected and when updates are available, it will still be announced on sixthseal.com – it would be just like the good old days with castitas.com. 😉 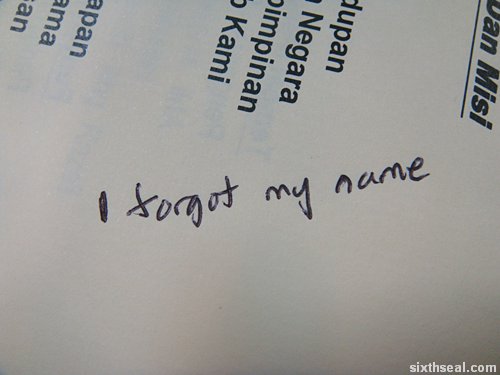