I nearly ate a rotten egg today! Well, I was going to boil two eggs
(I prefer them fried but that produces too much stuff to wash) to go
with the Indomie I’m having for dinner. I was holding them under the
tap for quite a while since one of them had bits of excrement on it.
Anyway, good thing I did that, coz I caught cracks in one of the eggs.
If I had just boiled them anyway, I would not have caught them until I
ate it. I’m just that blur. Ugh…just thinking about it…haha! It really
was rotten coz I opened it to check. Cracked it over the sink to check
the status. It left a stain in the sink too. It was that rotten.
Anyway, this one is for Vivien [blogspot.com] – Cinnaman on the Moon. Man landed on the moon
[nasm.si.edu] in 1969. As for the Magnum, it was just toooo plain. Even
vanilla ice cream tastes sweeter than this white chocolate ice cream.
It’s even worse than the normal Magnums coz the normal ones has a
chocolate shell at least. Cinnaman on the Moon just has a cinnamon
flavored shell. There wasn’t much cinnamon too, so the taste wasn’t
strong at all. It would have been much better if it had cinnamon ice
cream or there was more cinnamon in the shell. As it currently is, it’s
the worst one in the batch so far. Simply mediocre. 🙂 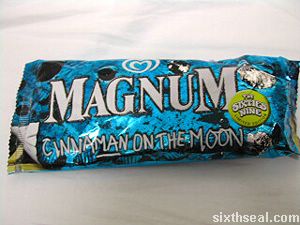 Moon craters in a dark blue foreground and Cinnaman on the Moon written. The “man” in “cinnaman” is underlined. 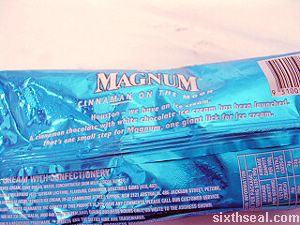 Houston – we have an ice cream. A cinnamon chocolate with white
chocolate ice cream has been launched. That’s one small step for
Magnum, one giant lick for ice cream. 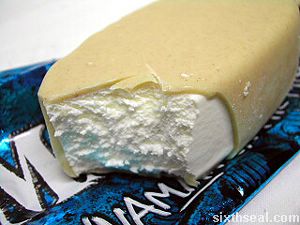 The shell is cinnamon spiced chocolate. You can see the cinnamon
spice flecks embedded in the shell if you squint a bit. The ice cream
is white chocolate ice cream. It’s not sweet at all for some reason. 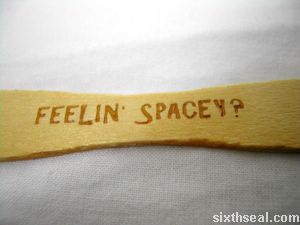 It’s just too plain to compare with the others. It would have been better if it was sweet at least.

Well, it’s probably less than 48 hours till the US invasion of Iraq.
Who thinks they’ll attack as soon as the deadline is over? I’m thinking
either Thursday or Saturday, not Friday.