I’ve recently joined the team of writers at The Weblog Review [theweblogreview.com]. Interesting tidbit: I got a 2.5/5 when my site was reviewed
[theweblogreview.com] on 20/10/2002. Just did my first review
yesterday, and it’s been accepted and posted so I can re-post it here: 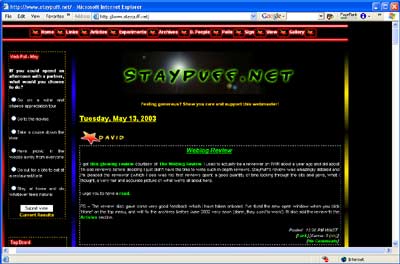 The first thing that I noticed about StayPuff.net is that it’s not
merely a weblog. The weblog is the main focus of the site, but there
are several other sections (including an intriguingly named
“Experiments” section) in addition the weblog. I was expecting those
sections to be external links, but clicking on them shows that they’re
internal content created by David, the owner of the site.

There are actually 5 authors (including David) listed on the side,
but 3 of the others have blogs of their own, and David seems to be the
only active writer. Browsing through the archives shows that the other
authors average about a post a month. However, David more than makes up
for the lack of the other authors posts with his frequent posts. The
other authors also frequently make comments on David’s blog and vice
versa.

The writing style of David is easy to read and he has a sense of
humour that translates well into text. The posts are varied and can be
anything from news events to David’s personal life. The posts feels
easy to read because of his writing style and that is not something
that many people can do. I genuinely felt compelled to read more due to
the way David structures his entries.

Unfortunately, I could only read up to June 2002, even though the
weblog has been online since May 2001. It appears that David made the
transition to Greymatter on the 22nd of June and clicking on all
entries before that resulted in a “404 – File not found” error.
Nevertheless, I thoroughly enjoyed reading all the archives up to June,
and it’s nice to see that the writing style and humour carries back to
the beginning.

The first other thing I clicked on was the Experiments link, and the
title does not disappoint. Inside that section, David describes the
internet experiments which he has conducted. I particularly enjoyed
reading the “Chatting up a chic via e-mail” one, where he posted a
tantalizing profile at an online dating site and compiles the list of
replies that he received. These experiments give the readers a
voyeuristic enjoyment in reading the replies. I was also impressed by
David’s sense of responsibility, in that he did not post the results of
the second experiment, which is about a dubious issue (read it on the
site).

There is also an Articles section, which is a list of articles David
and his friends has written over the years. These includes pieces as
varied as “A few pointers to seduce women” to a multi-part road trip to
Albany write-up, which was the first clue that David is an Australian
(I missed the Aussie Blogs webring link at the bottom of the main
page).

There is also a section called David’s People (D.People). It seems
to work like a agony aunt article in that David replies to readers who
write in about various personal problems. Some of them are funny and
some of them are genuinely helpful, but all of them are interesting to
read. The other sections are the guestbook, links, results of the
monthly polls and a gallery – which wasn’t the personal picture gallery
I expected but screenshots of David’s “The Sims” (a computer game)
families.

Regarding the design of the site, I found the clean approach and
black background to be easy on the eyes. I also liked the way the red,
blue and yellow bars seem to have an effect of guiding the eyes down.
That hypnotising effect is probably why I spent so much time reading
the main site. 🙂 However, there is a design decision which I found
strange. The archives of the blog open up in another window and the
formatting of the main site does not carry over into the archives. I
have no problems with this though, since the basic white archive
template is easy to read, but it does detract from the “integrated”
feel of the site. Also, this is nitpicking, but the Main link on the
top navigation bar pops up a new window instead of simply loading it in
the current one. I’m not sure if this is a conscious decision, but I
found this to be distracting as I have to close the new window.

In conclusion, I like the site and I feel that it really deserves a
4.5, but the inaccessible pre June 2002 archives and minor design
issues made me reduce the score to a 4 in compliance with the rating
guidelines. I really recommend that everyone visits this site, as it’s
worthy of that at least, to establish if you like this site enough to
read it regularly. Personally, I’ve already bookmarked the site and
will continue to read it daily.

This site was reviewed on 2003-05-12 by sixthseal.
They felt this site belonged in the Personal category.
sixthseal felt that StayPuff deserved a rating of 4.0

I got this glowing review courtesy of The Weblog Review.
I used to actually be a reviewer on TWR about a year ago and did about
15-odd reviews before deciding I just didn’t have the time to write
such in-depth reviews. StayPuff’s review was amazingly detailed and I’m
pleased the reviewer (which I see was his first review) spent a good
quantity of time looking through the site and gave, what I thought, a
very fair and accurate picture of what we’re all about here.

I urge you to have a read.

PS – The review also gave some very good feedback which I have taken
onboard. I’ve fixed the new open window when you click ‘Home’ on the
top menu, and will fix the archives before June 2002 very soon (damn,
they used to work!). I’ll also add the review to the Articles section.

Changes: The Articles link of the original StayPuff.net post has been changed to open up in a new window.