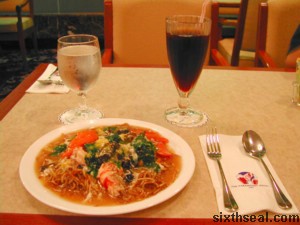 This is the Valentine’s Cafe Pan Fried Prawn Noodles from
Valentine’s Cafe in Paramount Hotel. I had dinner there with my buddies
Christopher and Ting Chuan. Christopher is also studying in Melbourne
and lives near me (both in Melbourne and in Sibu). He just came back
yesterday but he’s going to stay until the end of February. On the
other hand, I have to head back to Melbourne soon to finish my
Industrial Experience. 🙁 I love Sibu, there are people who prefer it
over in Melbourne, but for me my hometown is the best place. 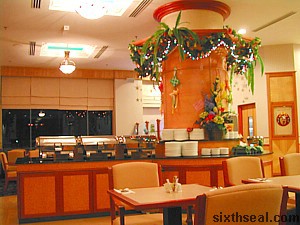 Anyway, back to Valentine’s Cafe, it’s a pretty good place to eat.
It’s at the Paramount Hotel opposite Taman Selera. If you’re from Sibu
you should know where it is, it’s the newly opened hotel. Nice ambience
and the service is pretty good too. You don’t feel pressured to leave
as soon as you finish your meal, unlike other hotel attached
restaurants. We stayed there for a while to catch up on stuff after
finishing our meal. The prawn noodles is pretty good at RM 9.50 (A$
4.75) and there were 5 (!) king prawns in the plate. The portion is not
very large, but it’s quite delicious and I love seafood so it’s pretty
good value for money. 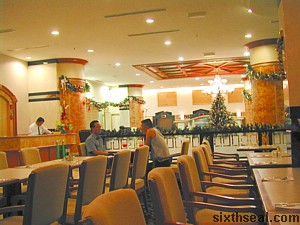