coz you might spill your drink. 😉 Gotta love that song from NOFX. Anyway, here’s what I did Thursday night and Friday night. 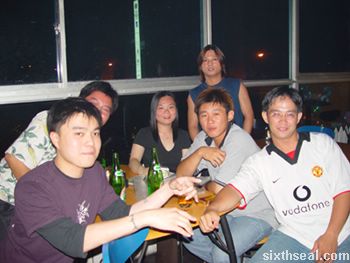 P/S – The hiding my track marks thing is a private joke, it’s not to be taken literally! 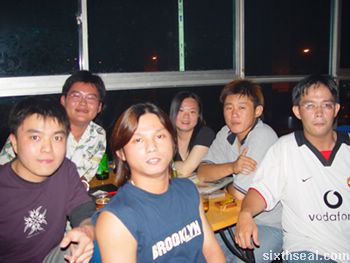 I went to Yes Music Cafe with a couple of friends where Tsingtao
beer flows aplenty. It’s a karaoke place that has great pumping music
“feng tau” style during the intermissions. Anyway, too many ethanol
containing beverages were consumed, and I wasn’t exactly the soberest
person in the world when I went into my car. It’s a good thing the
place is near my home and it was very late by the time we left so not
many lives were potentially endangered while yours truly was behind the
steering wheel. Technically, I knew I was unfit to drive and it’s
irresponsible to do that, but personally, I’m a safe driver when I know
I’m under the influence ie drive extra slowly, signal lights way in
advance, triple checking for cars before making turns, concentrated to
sober up and analyze the roads for potential traffic etc. Justification
aside, I definitely won’t be passing any breathalyzer tests that night,
it’s in one of the top three Most Intense DUI/DWI Incidents (MIDI) in
my life. It’s a good thing nothing happened. I hope no one who’s in
MADD (Mothers Against Drunk Driving) reads this. Thanks to Alan and
crew for following behind until I was home to make sure I was safe. Oh
yeah, in my lack of sobriety, I forgot to close the automatic gate,
only found out from my dad the next day. Oops…

I caught up with Ting Chuan, who was also back for the holidays.
Went to have (non-alcoholic) drinks at Bamboo House @ Premier Hotel, it
was the free drink vouchers from the time me and my gf had dinner
there. Anyway, saw the two girl performing group, there were only the
two of us inside so “This song is dedicated to those two gentlemen over
there”. I thought their music was great, and ah, the adjective to
describe their music would be very suitable to describe the aesthetic
features of the duo as well. 😉 I was kicking myself all the time,
because my digicam was broken and Daniel had already left so I couldn’t
take pictures. Too bad.

I got a call asking me to go out right as I was typing the “Friday”
part, so here’s “Saturday”. I wasn’t planning to go out tonight so I
had to decline. I’m already in my PJs and tonight has been designated
The Day of Rest. Gotta run, got a plane to CRASH. Har Har. *cough*