Upon arriving at Chadstone, me and my mate Jimmy got something to eat at nudle. I was craving
for some Chinese food but the food courts upstairs were closed so the next best thing is the quasi
Chinese food place near Hoyts. I had Malaysian Chilli Seafood Stir Fry with rice and a chocolate
milkshake. After the meal, we headed over to Hoyts to check out the status of the line, but seeing
not much activity there, we went to Pancake Parlour for dessert. I had a stack of pancakes with
cream and a coffee. When we got back to Hoyts there was a line of people waiting there already so
we got to the back of the line and queued up. Good thing I had my Palm with me so I read my Java
lecture notes which I had the forethought to sync before coming here. There was another guy in
front of me with a Sharp Zaurus and a girl behind me with a red Visor. Pretty good PDA showing
considering Australia doesn’t have a lot of PDA users.

There were two guys beside me with a digital camera and a toy lightsaber that started to shoot
pictures of the line. Upon seeing that, a senior staff member came over and asked that the guy put
away the digicam as no cameras will be allowed in the theatre. However, the staff member did not
want to keep the digicam for the duration of the film because she did not want any liabilities, so
the poor guy had to get out of line to put it in his car. Heh. Anyway, after a long wait, the we
were allowed into the main waiting area. There were three groups of people, the La Premiere room,
Cinema 12 and Cinema 5. Interesting that they opened up 3 screenings when they planned for one. The
La Premiere line is the longest one and also the one with the most security checks. Everyone got
their bags checked before being allowed into the theatre.

There was another long wait outside the theatre, with us sitting on the stairs in a line. The
Hoyts staff begin distributing magazines to the people waiting in line to keep them occupied.
Unfortunately, the only magazines given out were this: 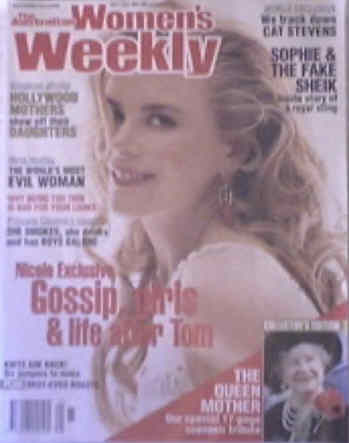 Hmm…alright then. At least it kept be busy reading the articles considering I didn’t have the
forethought to charge my Palm batteries and it ran out on me. While waiting in line, I felt the
rumblings of a stomachache. Heh, I should not have eaten the chilli seafood dish on an empty
stomach. I didn’t want to go to the toilet though coz the doors were about to open. After a couple
of minutes, the doors opened and everyone ignored the poor attendent asking to see tickets and
rushed into the theater to secure a good seat. There was a group of guys in front that nearly
started a mini stampede by running into the theatres. 🙂

After a short while, the screen came to life and everyone started clapping…to the Hoyts snack
bar advertisement. =D The usual adverts and trailers ran for 20 minutes while the crowd settled
down. I did see a good Nike advert – it was the steel cage tournament one. Pretty interesting. The
Gamecube one was not bad too. The trailers that ran I’ve mostly seen before from Apple’s trailer
site, but it’s nice to see the Superman one on the big screen. Kirsten Dunst filling up the screen
in the end of the trailer where it was raining on her wasn’t exactly hard on the eyes. 😉

Soon after that, the film started and everyone started cheering and clapping and mimicking the
voices of Star Wars characters. The cinema was filled to capacity and it was a pretty good crowd,
mostly fanboys with about 80% males and 20% females. The movie started with the usual panning up
after the words scrolled up to screen. Natalie Portman seems to have gained a bit of weight in this
film, but she’s gorgeous as usual. I didn’t expect to like Hayden Christensen but I think he did a
pretty good job with this one. Believable chemistry between him and Natalie which is a plus during
the love scenes. I thought it was really, really sweet when Amidala kissed Anakin on the cheek when
she jumped from the pole in the arena.

This film was much better than Episode I, and I am one of the few that liked Episode I, so
that’s saying a lot. 🙂 The music was great, especially during the arena battle. The Jango Fett
storyline is good, gives a bit of back story for him and shows us his fatherly side. The Naboo
scenes are beautiful, I reckon it’s not hard to fall in love in that kind of environment. =D And
Natalie Portman gets some pretty nice outfits *wolf whistle*, I especially liked the one she wore
in that scene with Hayden beside the fireplace. Those things look very perky and firm and pliable.
😉

There is one scene which was quite cheesy though. Perhaps the director didn’t mean it to be so,
but it’s hard to take it seriously when the whole theatre is laughing. The one I mean is the Anakin
nightmare sequence, it comes right after the fireplace scene so all the gutter minds in the theatre
was laughing their asses off. We get to see Anakin’s dark side start to surface in this film. He is
rebellious and confrontational with almost everyone. The visual effects are pretty good, everything
is believable and detailed. I especially liked the arena fight, that was the coolest part of the
film.

All in all, this is a very good film, I expect even non-fans will like it. It develops all the
characters nicely and it’s a great lead up to the third installment, which I am very much looking
forward to. We finally get to see Yoda fight and he’s really good. I expected it to be strange
considering Yoda’s height but he really pulls off some pretty impressive moves and more than held
his own against his opponent. Go see it in the cinemas, the cam DivX and the pirated VCD doesn’t do
this film justice. I give it 5 out of 5 seals.

Funniest line in the film: Obi Wan saying “Anakin, I swear one day you’ll be the death of
me” (or something to that effect). It had the Star Wars fans laughing while most of the theatre
were probably wondering why we were laughing.

Bye I went back

The movie ended at around 2:30 AM after which I went home. I’m not my usual eloquent self today
(heh), but that’s because it’s nearly 5 now, I’m sleepy, and I still need to finish up my
assignment. I’m glad The Force was with me as I managed to hold my diarrhea until I got home. I
knew I should not have eaten hot stuff on an empty stomach. =D May The Force be with you too, young
Jedi.