We caught the 12:30 pm bus back to Sibu and arrived all st and hot
and uncomfortable. I took a nice long bath and promptly fell asleep and
awoke again at 6 pm and had to rush out to catch the big screen World
Cup final at the city square. Mukah was pretty fun, we stayed at a
dodgy hotel for RM 35 a night. It’s either called the Mandarin Inn or the Mandyrin
Inn, I can’t figure out which coz one of the signboard says Mandarin
while the other says Mandyrin. Heh. We checked in as soon as we arrived
at Mukah, which was about 5 pm. Sibu -> Mukah takes 2 1/2 hours. The
bus ride was quite terrible, there are heaps of potholes on the road
and we were sitting at the back. I didn’t really get carsick but I was
about to. 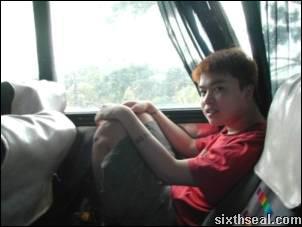 After checking in, our first priority was to find a place with a big
screen to watch the semis. There is a small TV in the room, but we have
to squint to make anything out so we didn’t bother. There was a cafe at
the bottom floor of the hotel, but before that, Daniel’s girlfriend’s
sister picked us up with her husband and took us to the beach. 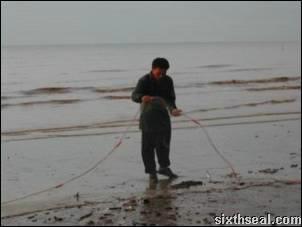 Fisherman at work at Mukah beach in the late evening. 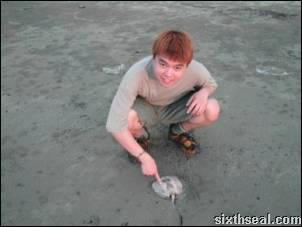 There are heaps of dead sea life washed up on the beach. 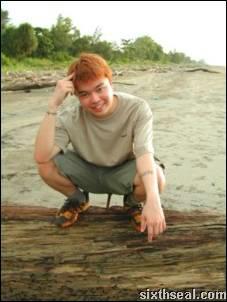 For some reason, I feel a slight discomfort to my posterior while
squatting on this dead log. 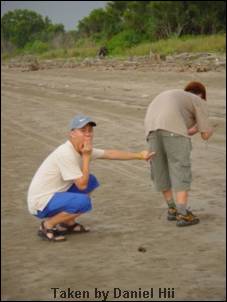 I was trying to get a shot of those small crabs on the beach
using my macro mode and unbeknownst to me, Johnny crept up and tried to
pull down my pants. Daniel took this picture.

Contrary to prior reports, the beach is clean and perfectly fine for
swimming. Unfortunately, we didn’t bring a change of clothes so we
couldn’t actually swim. Managed to walk along the length of the beach
and then went to the new town to get something to eat. Apparently Mukah
has an old town and a new town. 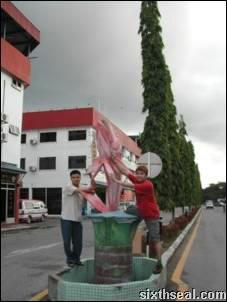 The fish at the main road in the old town. 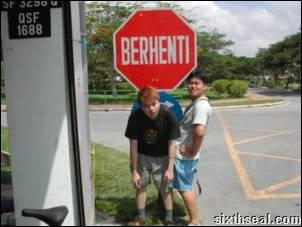 The largest Berhenti (Stop) sign I’ve even seen in my life. I was
flabbergasted by the girth of the sign. I don’t know what Daniel was
doing, but it looks damned naughty. 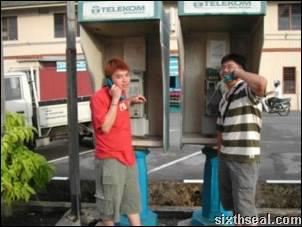 Me and Daniel calling our girlfriends on the public phones due to the fact that Digi (016) coverage does not include Mukah. 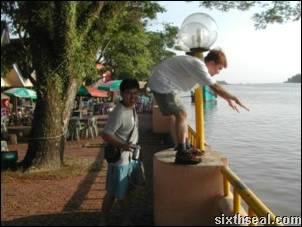 Daniel is trying to give me a bit of a nudge while I attempted to dive into the Mukah waterfront.

Our hotel was at the old town and the new town is a 10 minute walk
from the old town. I managed to try ulat sago, the worms that feed at
the bottom of the sago tree. This one is fried though, I want to eat
some raw ones so we’ve decided to go to the market to get some the next
day. After dinner, we went back to the hotel, lined up for showers and
went out again at around 10:45 pm to get some supper. I helped myself
to a large serving of umai – the raw fish that’s eaten with sago pearls
and dipping sauce. 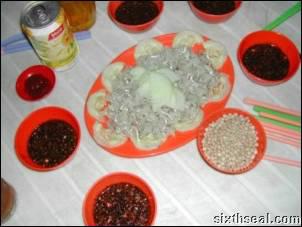 Pretty tasty. But not exactly filling so we got some kebabs on the
way back too. Anyway, there are two beds in the hotel room and three of
us, so we decided to play a game of blackjack to decide who’s going to
sleep in the middle. Heh. Very funny stuff, it cracked me up so much I
had a laughing fit for 10 minutes! By the way, it wasn’t me who got the
unpopular middle place. I got 17 and decided to hold, while Daniel and
Johnny drawed and got 22 and 24 respectively. Naturally, I get an
automatic side bed while they had to play another game to see who gets
the middle. Now here’s the funny thing, Johnny got 17 and held while
Daniel (who has 18) decided to hit again to be safe. Unfortunately, the
next card pushed him over 21 and he had to take the middle. hehe. 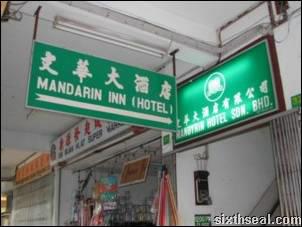 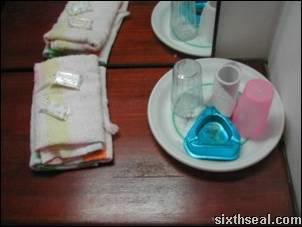 I didn’t dare to use the hotel towels. Very bare amenities provided. 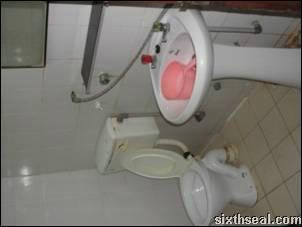 The toilet/sink/shower, all rolled up into a compact space. 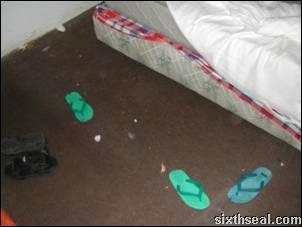 When we moved the beds together, this is what we found under the bed.
Several old slippers, used tissues (!) and miscellaneous rubbish. 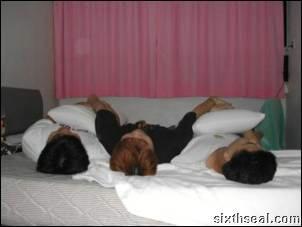 I’m being flanked by Daniel (left) and Johnny (right). My attempts to
molest them were thwarted by pillows.

I couldn’t sleep that night, I only got about 3 hours of sleep. I ended up reading Robert J. Sawyer’s Flashforward
[sfwriter.com] on my Palm for the rest of the night. We woke up at 7 am
the next day to go to the old market and book our return tickets. I
scoured the whole market place and could only find one vendor selling
live sago worms and he was selling them in RM 10 bags containing about
50 worms. I only wanted to eat a couple, so I decided to try the new
market but there weren’t any there so I came back again and both the RM
10 bags were sold out! Grrr…I was looking forward to eating those
live worms. Anyway, I did get some salad (not the vegetable, the fruit
with scaly dragon like skin), which doesn’t really taste all that good
to me. 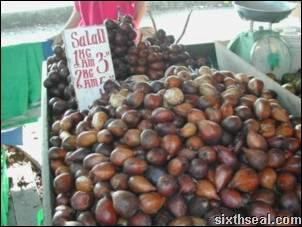 We walked to the new town and managed to cover the whole town in about 20 minutes. Mukah is not exactly a large place. 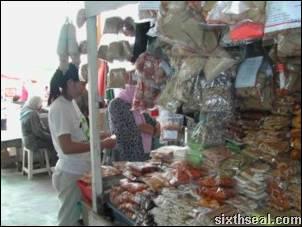 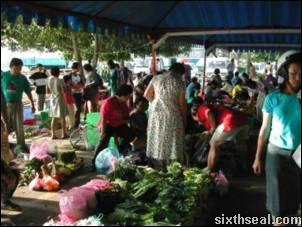 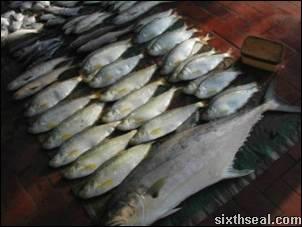 After a quick breakfast at Nelayan Melanau Restaurant, we went back
to the old town and packed up. We got some pastries to eat at the
bakery opposite the hotel and caught the 12:30 pm back. 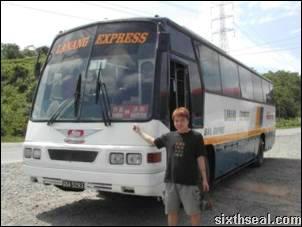