I was planning to update sooner, but I was caught up in a game of scramble
(a word game) in #kuching. Pretty fun and addictive stuff. Anyway, I went
out with Yi Ching, Daniel and Johnny today for some bowling action. Me and
Daniel had a game of pool while waiting for Yi Ching to arrive and I can
safely say that my pool skillz have not atrophied. It feels good to be
able sink shots using a dodgy cue. =D

My bowling skillz have improved somewhat too. I managed to get a strike in
this game. 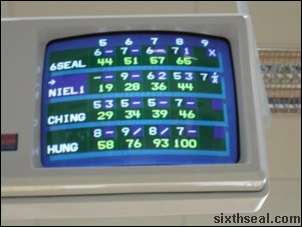 Overall, I did better than last time. I used a heavy bowling ball and
rolled it down the lane with brute force, which seems to work much better
than that spinning nonsense I was trying last time. Heh. Managed to down
plenty of pins for a change. I think the velocity of the ball when it hits
the pins is very important, so I used a heavy ball and just hurled it down
the lane for maximum pin trippage. 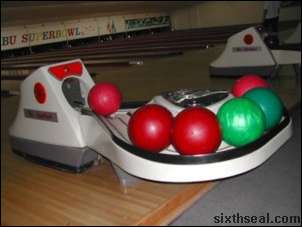 After a couple of games, we headed down to the UCA (United Chinese
Association) food court in Bukit Lima. Had a bowl of those “longevity
noodles” that people eat during Chinese New Year and birthdays. It’s that
thin, clumpy rice vermicelli that is eaten with chicken soup. I don’t know
what possessed me to order that, since I don’t like that stuff at all.