I went out at 8 am this morning to get some breakfast with Diana. Picked up Daniel too and headed off to Sugarbun to get something to eat, partly because it’s air-conditioned and partly because we haven’t eaten there in a while. 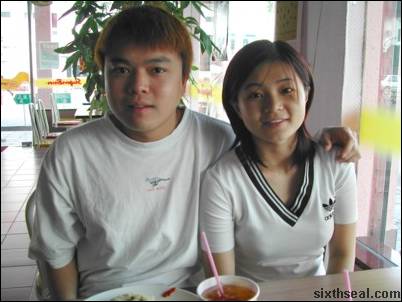 Hung around there for an hour before Ah Chan joined us. We had to leave at 10 am though, to meet up with Yi Ching and Justina to go to Sarikei. We went to the city bus terminal to catch the bus, but the buses leaves in 2 hour intervals and we just missed the 10 am bus. We decided to take the express boat to Paradom and catch a bus from there. The bus fare from Paradom to Sarikei is RM 5.40, the most I’ve paid for a bus ticket in Sibu. Heh. 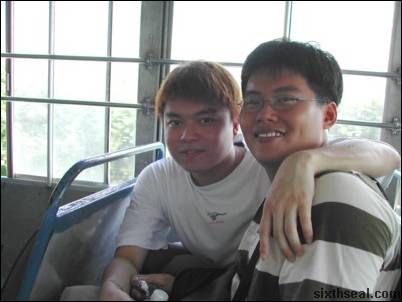 An hour later, we were in Sarikei and got some lunch while waiting for Jonas to pick us up. 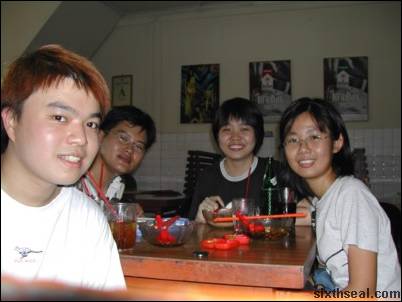 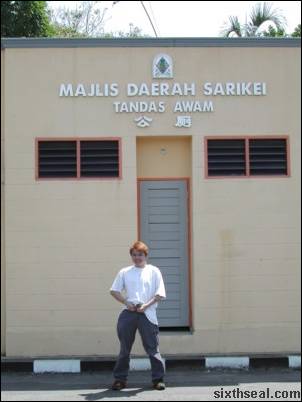 Obligatory picture with Sarikei signboard to show I was there 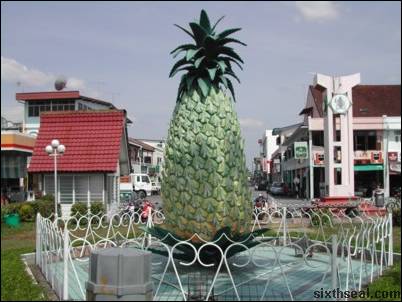 The pineapple replica in Sarikei town

After lunch, we walked to the tallest building in Sarikei (some government building) because it was air-conditioned. It was really hot today. We walked to Courts Mammoth after that to pretend to try the couches there. Another thinly veiled attempt to enjoy their air-conditioned premises, of course. I saw this interestingly named coffee shop besides Courts Mammoth. It’s named Ma Li Cafe which cracked me up. 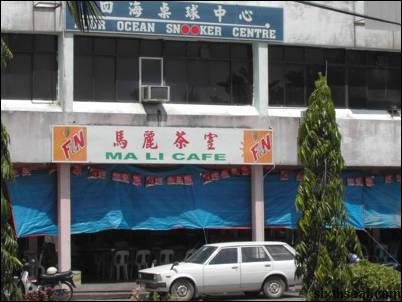 If you speak Foochow, the words “ma li” will no doubt elicit chuckles. For those of you who don’t, it sounds like a mild profanity in Foochow. After that, we walked to SMB St Anthony (a high school), who seems to produce several individuals of high caliber. 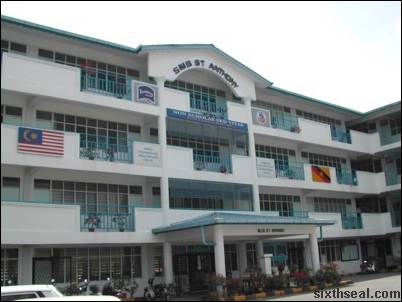 Jonas picked us up from St Anthony’s and we headed to get some ABC special to cool down and headed off to Ngiu Kee to get a large bottle of cold mineral water. 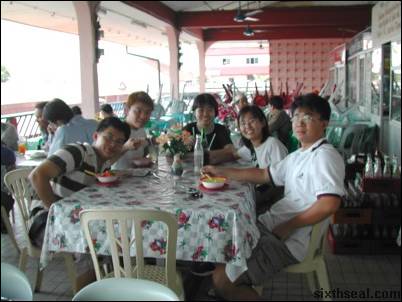 We went to this new park in Sarikei after that, it’s called the Water Tower Park, if I’m not mistaken. The main feature is an old water tower. 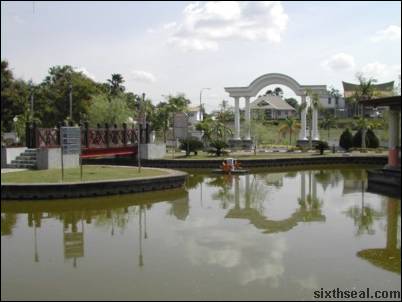 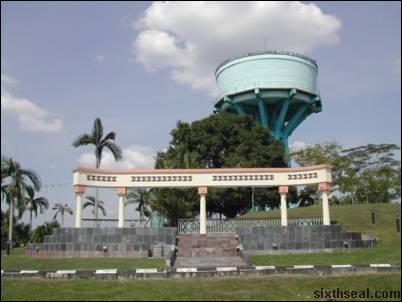 Jonas dropped us off at the government building again after that and we got visitor’s passes to go to the top floor. The top floor is the 10th floor (what did you expect?) and there is nothing much there, except a good view of the river and some exceptionally cool air conditioning. 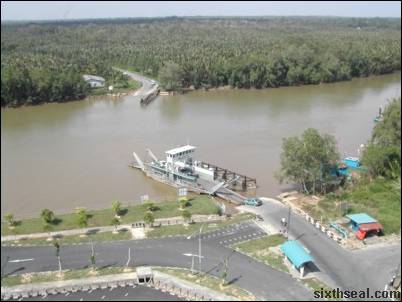 View of the river with ferry in dock

A friend of Justina’s picked us up after that and took us to Sebangkoi, a nature reserve about 30 minutes away from Sarikei town. Took heaps of pics there and Yi Ching had cramps and was trailing us all through the reserve. =D 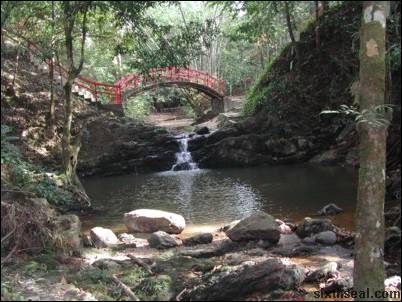 Bridge over a waterfall 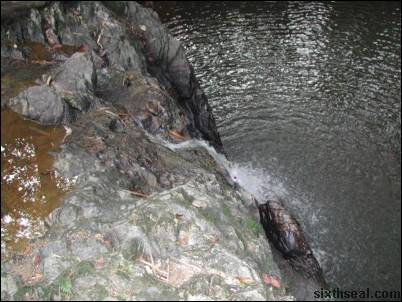 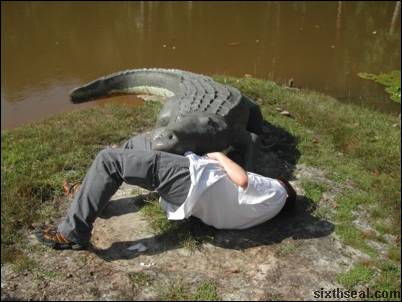 We headed to Daniel’s uncle’s orchard after that, where I was promptly bitten 1000 times by 1000 mosquitoes. 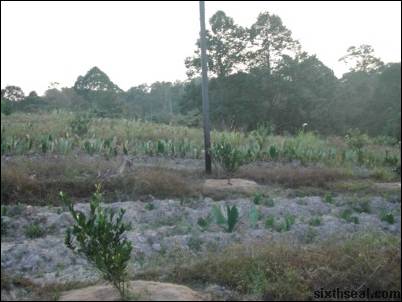 Managed to walk though most of the orchard, which contains ‘landmines’ in the form of holes (some going down as far as 1 feet) which are covered by shrubbery. 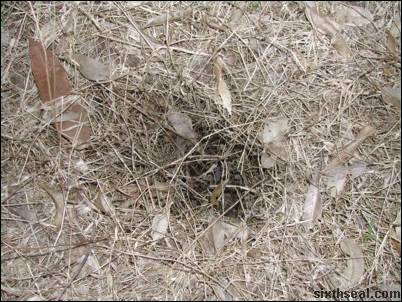 Tr navigation. I also managed to drive this mini tractor thing, which has no gas pedal, but only a lever to move faster. The gear shift is in between the legs too, and the tractor jittered all the time, which makes an interesting experience. 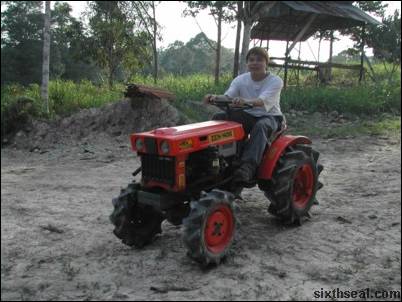 We drove Daniel’s uncle’s car to Jakar (har har…sounds like penis in Malay) to get something to eat. Headed back to the orchard after that and hi uncle drove us back to Sibu at around 8:15 pm. Interesting day, but I managed to get mild heat stroke from the obscene heat. Poor Yi Ching was struck by heat stroke too, we’re both sensitive that way. Now where did I put my Poh Chi Kit pills? 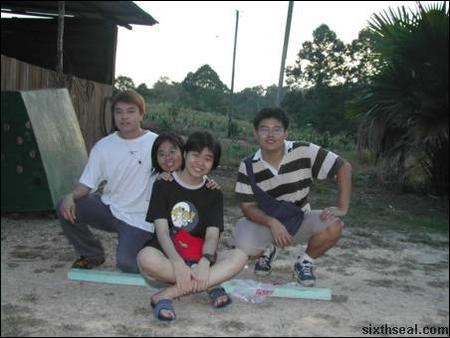