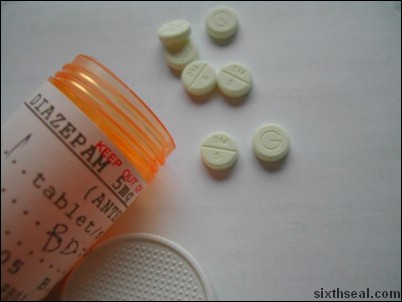 Hmm…I’ll make this short coz talking about this is depressing in itself.
Well, I’ve been suffering from bouts of depression every few months.
Usually, it’s tolerable, but sometimes, it comes with anxiety attacks,
which makes it somewhat hard to shake off. I had one of those two days ago
and went to see a doctor. I was diagnosed with clinical depression (low
serotonin levels) and prescribed some Diazepam (Valium). It comes in
yellow 5 mg tablets and I was told to take two while talking to the
doctor. It did help heaps with the anxiety, and I found that if I think
happy thoughts, it helps with the depression too. However, I was hit by
some wild ass mood swings when it started to wear off, so I’m not going to
take it again. Also, I admit I have an addictive personality so I’ll
rather stay off benzodiazepines. I haven’t taken it since then, I’ll
rather tough out my depressive episodes instead of relying on
pharmaceuticals. Oh well, look on the bright side. At least I have the
option of not taking anything and still not kill myself. Some people do
not have that luxury and need to take benzos or else they’ll become
suicidal. I’ve struggled with suicidal thoughts myself though, and in one
major depressive episode, I nearly did it. But I found out that running as
fast and as hard as you can until you collapse from exhaustion is a good
way to get your mind off things. That and praying. If you still feel
suicidal after that, sing (scream) as loud as you can to drown out those
thoughts and go somewhere where there are people around. I know that the
sheer desperation that occurs during depressive episodes is pretty
bad, but I’ve survived so far. =D Anyway, regarding yesterday’s post, I
was wondering whether moving to another halls will help. Change of
surroundings, you know. We’ll see. Hmm…now I’ll have to put a happier
post on top of this so I don’t have to see it when I load my page.

P/S – If you know me in real life, I don’t want to talk about this because
it makes me depressed. Thanks.