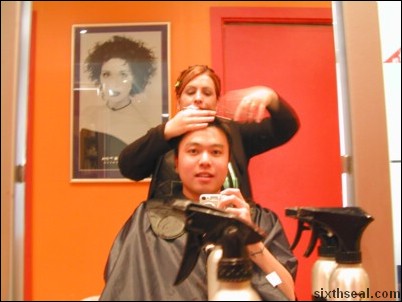 I finally managed to get a haircut today. It only cost A$17, which is
pretty cheap over here. I went to Monash Hair Salon at the campus center.
Anyway, I watched a HK movie on VCD just now. It was the 2002 Chinese New
Year movie by Andy Lau and Gigi Leung. I don’t know the name, but it’s
about mahjong. The plot is predictable, but that’s not the point. It’s a
Chinese New Year movie, it’s supposed to be a feel good movie, not one
where you can endlessly debate the intricacies that motivated the main
protagonist. I like Gigi Leung before the breast augmentation surgery (in
the movie). She seemed rather top heavy after that. Heh. I want to go home
for Chinese New Year. Update: The movie is called Lik Goo Lik Goo San Nin
Choi (Fatt Choi Spirit). Man, that rice bit was funny. =D

1 thought on “I feel liberated”