I saved a man’s life today. Well, maybe not his life (it was his
luggage), but he made it sound like it. I had felt like eating indomie
at 5 am in the morning and walked to the kitchen. Halfway past, I heard
a scuttling of feet and someone calling “hey”. I stopped and looked at
the dude, but I didn’t recognize him so I looked back and saw this taxi
waiting there. I assumed that the guy was talking to the taxi driver so
I walked along, but I heard more urgent “hey”‘s and frantic waving and
running while carrying 3 pieces of luggage. I stopped and the guy
caught up with me and said “Thank God I saw you, I thought no one would
be coming along”. I went like “Of course, mate it’s 5 am in the
morning” and he went on about how he was leaving Australia to go back
to Japan for good and he had already dropped off his key at the
operations office (there is a hole in the wall for after hours key
drop-off) before he realized that he left a piece of luggage in his
room. The thing with Roberts Hall is that every stairway has a locked
door which can only be accessed by a Roberts resident’s key. Since he
already dropped his key off, he couldn’t get back to his room. The
operations office only opens at 8:30 am and no one will be out and
about THIS early during the summer holidays. He said he was about to
give up on his luggage when he saw me. Anyway, I opened his stairway’s
door for him and he kept thanking me. The taxi turned out to be for him
and he has already asked the taxi driver to wait for nearly half an
hour while he waited for someone to come along. He got his luggage
anyway, I saw him with 4 pieces of luggage rushing towards the taxi
while cooking my noodles. Interesting moment. Which reminds me of the
room I lived in last semester. There was this girl who lived two doors
down who always locks herself in accidentally. So, she got to sticking
this big ass cardboard lettered with “DO YOU HAVE YOUR KEYS??? CHECK!!!
DON’T LET THE DOOR CLOSE!” and pasted it at the top of our floor’s
stairs. Man, that was a hoot. It’s good for me too, coz I always lock
myself out as well. I’m scatter brained. So the sign served 2 people
instead of one.

Anyway, look at this: 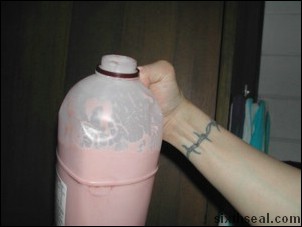 I had bought a pack of goat’s milk a couple of days ago and the next
day, I got a 2L bottle of chocolate milk. I had already drank about 3/4
of the goat’s milk the day before and drank about half of the chocolate
milk that day. Since I’m storing it for the night in the fridge, I
decide to combine the two, so I only have to store one container
instead of too. Thus, I added the goat’s milk into the chocolate milk.
The next day, this resulted. The chocolate milk + goat’s milk has
totally solidified into a jelly like sludge with the consistency of
pudding. I know because I actually tried it. Ugh. Tasted velvety,
that’s the worse thing. I loved the texture, but the taste was way off.
Sort of a dull cardboardy taste. I had expected it to be sour, but it
wasn’t. Strange. My theory is, the UHT goats milk has been pasteurized
and maybe still has a couple of bacterium killing active stuff in
there. This kind of thing is not my area of expertise, so I don’t know
how valid my theory is. Anyway, I postulate that the pasteurized
thingy’s attacked and killed the (harmless) bacterium in the (fresh)
chocolate milk when they were combined and thus the battle resulted in
the sludge, which is the pasteurized stuff absorbing the water from the
bacterium and puffing everything up and making it jelly-ish solid. What
do you think of this phenomenon?

Incidentally, I’ve been playing a lot of Natural Selection (for
Half-Life) lately. UHT’s pasteurized thingies = Kharaa and the natural
(good) bacterium thingies in the chocolate milk = Frontiersmen. The
Kharaa just killed the Frontiersmen’s spawn is just what happened to my
chocolate milk + goats milk combo. Hmm…I’m torn between liking the
fast Zergling – uh, I mean Skulk and the bountiful mass of the
Ultralisks, ah, Onos. I totally love being a Frontiersmen as well.
“gimme hmg” “rtb” and so forth. hmg = heavy machine gun and rtb =
return to base by the way. Jim Raynor, REPORTING!