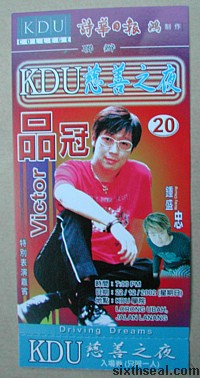 I was driving to KDU’s campus to see the Victor/N Chung concert when
this fuckwit in a green Proton Iswara decided that I had superhuman
reflexes that allows me to go from 70 kmph to 0 kmph in 2 seconds flat
on a rainy day when the roads are slippery. Luckily, unbeknownst to me,
I really DID have that ability even though it was dusk at that time and
the rain made visibility really poor. Hurray for me.

This scene happened on a stretch of road with a gap in the road
divider for U turns, and the driver of the green Iswara was planning to
do just that, but he/she stopped suddenly instead of slowing down and
using the signal lights, which is what non-fuckwits do. Anyway, I
managed to avoid colliding into the car, so all is well right? On any
other day, that statement would hold true, but on a rainy day, these
things have a way of compounding and affecting other drivers on the
road.

As I was liberally applying my horn to voice my displeasure at the driver’s fuckwitted-ness, I heard a very particular
screeching of tyres which could only mean a certain collision or a very
near miss. With some trepidation, I looked into my rear view mirror and
saw this Land Cruiser careening towards me at a speed which could not
possibly stop before it hit me. No fucking way in hell.

It was getting bigger and bigger in my rear view window and it still
wasn’t slowing down anywhere near enough to avoid a collision. I’m glad
I had another superpower – Thinking Really Fast. Okay, maybe that’s not
really a superpower but still… The fuckwit in the green Iswara has
still not made the U turn due to heavy traffic on the opposite side, so
I twisted my steering wheel to the left as far as it would go and
really stepped on the accelerator. I figured, if I hit the green
Iswara, it would just be on the side of the bumper, but if that Land
Cruiser hit me, it sure would not have been pretty.

Miraculously (there wasn’t enough space), I squeezed by the Iswara
without hitting its bumper and the Land Cruiser screeched to a halt wayyyyy past
the Iswara (the driver must have swerved as well). That meant the Land
Cruiser would have hit me (and not lightly at that) had I not made the
gamble to hit the gas and squeeze by at that crucial moment. Oh well,
disaster averted. I’ll write up the concert tomorrow, feeling really
blah now. Release serotonin please.