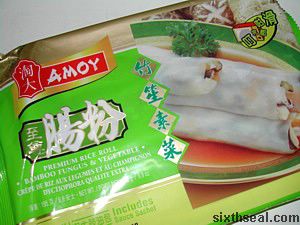 Amoy. It sounds like the generic term for young females that people
of my hometown use, particularly when summoning waitresses. 🙂 I don’t
know the origin of the term but I think it could be Hokkien. There’s
also a Foochow counterpart – ah mui yang. I’m Heng Hua, but I don’t
know what the Heng Hua equivalent is. I can understand the language but
the only phrase I know is “hiaw eh”. It’s a very versatile exclamation
that can be used for practically anything. Use it to substitute “si
lor” if you’re Hokkien and “eh siang noh” if you’re Foochow. I don’t
know many people who appreciate being called amoy though. Hiaw eh, I
have digressed far from what was meant to be a post about dinner.