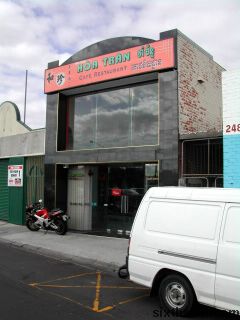 I went with my friends to Springvale for lunch this afternoon. Or
was it yesterday afternoon? I’m very, very disturbed at the disastrous
loss of my short term memory, which I hope is not permanent. I also
hope that I can remember things I’ve only said two minutes ago without
having concentrate for two full minutes but that’s a different story. 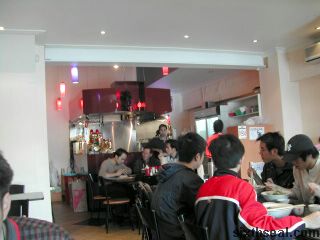 Anyway, I’m pretty sure it happened today, yeah I’m sure of it. We
went to Springvale and went hunting for someplace to eat where we
haven’t eaten before. We stumbled upon this place called Hoa Tran
somewhere in Springvale. 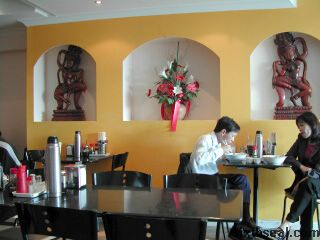 The interior was pretty nice, had some statues and such around the
place. I had broken rice with pork chop and everything. It’s very nice,
especially when you pour all of the chili on top of the dish. I’ve
always used to do that since I first had broken rice in Good Dragon at
Monash College. I had a friend in college who used to mix every sauce
(oyster sauce, fish sauce, soy sauce, BBQ sauce, chili sauce etc)
together with salt and SUGAR and use it as a dip. Sick, sick fuck.
That’s what I thought until I tasted it. It was strangely disturbing,
yet great! 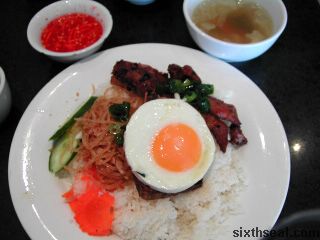 Vietnamese Broken Rice with everything 🙂

I digress. Anyway, the pork chop broken rice (with everything hehe!)
was good. The egg tasted really nice for some reason and the sauce was
great too. It’s cheap as well, it cost A$7 and it comes with soup.
Anyway, everyone came back to my place after that and we watched movies
and I copied some HK movies over to my hard disk. I love showing the
explicit version of Prodigy – Smack My Bitch Up and Cradle of Filth –
From the Cradle to the Enslave to people who hasn’t watched them
before. 🙂

Link of the day: Buy Ecstasy and speed legally over the counter! [news.com.au],

So called “party drugs”, including ecstasy and speed, would be
sold in licensed drug shops by medically-qualified staff at prices
which would undercut the black market.

Vote for the Greens! I would do so too if I lived in NSW and I was a citizen. 🙂

P/S – Please read veritas’s report below. He tool 4 hours to write
it (not including the pictures) and many hours of actual field work.