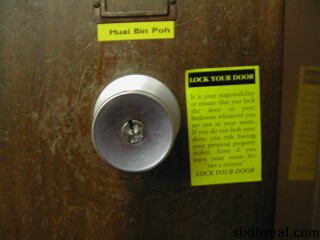 Lock Your Door
It is your responsibility to ensure that you lock the door to your
bedroom whenever you are not in your room. If you do not lock your
door, you risk having your personal property stolen. Even if you leave
your room for “just a minute”
LOCK YOUR DOOR

I just saw this sticker stuck on my door today. It was stuck on
every single door in our halls. It’s sad that living in a community
does have some bad elements as well. Personally, I’ve only been shafted
twice and only once was from my room. I am notorious for not locking my
room when I go out, partly out of a belief that people are generally
honest and partly because I hate having to dig though my pockets for my
key when my hands are full.

I’ve had a fridge stolen two semesters ago, but that wasn’t from my
room. I had stored it in the common room as required by the regulations
when I went back for the mid semester break and when I came back, it
was gone. The resident advisor’s records showed someone claiming to be
me checking it out and moving out. Oh well. I guess I’ll have to store
my Marquis reagent in the common fridge from now on. I’m kidding of
course. No, I’m really kidding so don’t go rooting around the fridge.

Anyway, the second time was when I left this really nifty A$24.95
can opener in the common sink. When I came out to wash it, it was gone,
and I thought that was the end of it so I got another cheaper one. A
week after it disappeared, it mysteriously appeared again at the same
place again. So I guess this qualifies as “borrowing” but he/she could
have at least asked me. What am I supposed to do with two can openers?

The third time was when someone took cash out of my room while I was
taking a shower. My room was right beside the shower then and my door
creaks distinctively when it’s opened. While I was taking a shower, the
door creaked and I shouted “I’m in the shower, I’ll be out in a sec so
just sit around a while” coz the walls are thin and they can hear me
from my room. I thought it was a friend, but the person didn’t answer
me and soon after that, the door creaked closed again. I returned to my
room to see that the A$10 I put on my keyboard to remind myself to get
a calling card was missing.

The guy rummaged around a bit too coz my room was messier than
usual, but he didn’t find my wallet so I think the most he got away
with was A$10 and some change that was on the table. Heh. I don’t think
it was done by a ressie (resident) though. Must have been someone not
from the halls. Oh well, it’s just A$10 so that wasn’t that big a deal.
But I did lock my door after that, although I’ve gone back to the habit
of not locking my door again.

I believe most ressies are honest people anyway (me = idealist), and
these things don’t happen all that often. I wonder why the management
decided to stick this new sticker on everyone’s room…I didn’t think
theft was such a big problem here.

Stuff like single serve ice creams, dairy food, yogurt, juice and
beer have a mysterious habit of disappearing from the community fridge
though. 🙂