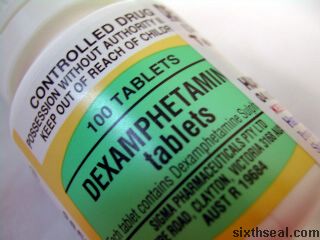 Dexedrine. That’s the brand name for dextroamphetamine
[rxlist.com]. Dextroamphetamine is the dextro isomer of amphetamine
sulfate (the street drug called speed). I wonder if dextroamphetamine
and dexamphetamine refers to the same thing. [Edit: I just found out
that dexamphetamine and dextroamphetamine is the same thing.] I’ll
appreciate it if any pharmacy students clears this up in the comments.
It has the same effects as amphetamines and it’s a very controlled
prescription drug, very much more so than benzos, due to it’s addictive
nature. Again, I put my trust in my acting skillz and I got a bottle of
100 x 5 mg tablets for my ‘narcolepsy’ ;). They are white pills with
D/5 on one side and no imprint on the other. The edges are beveled.
It’s the instant release kind, not that time release bullshit. Woo!
From my subjective experiments, I would say that 3 of these pills would
be equal to one of those feng tau yuen pills you get in Malaysia. I’m
talking about the “no sleep” ones that contains (meth)amphetamines, not
the ketamine pills. The “no sleep” feng tau yuen contains the same
chemical anyway.

Well, I took 4 tablets and crushed one up and insufflated it. Whoa!
Dextroamphetamine should really be snorted instead of eaten. It gave me
such a huge head rush when I insufflated it. You have to snort hard and
get all the powder from the pill deep into your sinuses for that rush
though. The drip wasn’t too bad tasting, but snorting more than a
couple of these beauties would clog up your nose really fast. 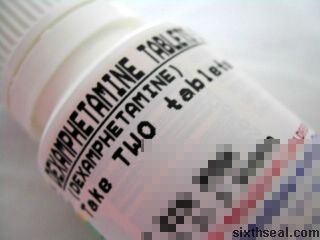 Well after eating 4 and snorting one, I felt really good.
Amphetamine type feelings, like eating a strong feng tau yuen. Very
energetic and euphoric and I couldn’t stop talking. Hmm…there’s this
saying which goes “Never let a speed freak near you or he’ll talk your
ear off”. Heh. Very true, this one made me very sociable. It doesn’t
cloud your mind either, I could work and read fine.

In fact, my concentration increased (happens with all amphetamines
though) and I felt like my IQ doubled and I could work three times as
fast as I usually could. Of course, I pulled those numbers out of my
ass, and it’s probably just perception but you could really get some
good studying done on these things. Anyway, like all amphetamines there
is a very strong compulsion to have more. After a couple of minutes I
ate another two pills and had another two pills 15 minutes later.

That was when I reached the peak and damn, was it euphoric! It was
amazing, clean and in my opinion a better high than methamphetamines. I
couldn’t sit still and felt absolutely wonderful. I couldn’t go out and
party though coz I had some stuff to do so I thought it was a good idea
to call random people.

I think I called more than 10 people. It felt good just to talk, but
I’m the type of guy that LOVES stimulants. I couldn’t stop smoking too,
another amphetamine type effect I get. I think all smokers chain smoke
while on amphetamines because it somehow feels much better than it does
normally. The buzz was really good, I heard someone call this phenomena
“reward smoking”. It’s when smokers who take amphetamines start to
crave for cigarettes and couldn’t resist the urge to smoke due to some
kind of dopaminergic (sp?) activity amphetamines cause. Don’t quote me
on this though. 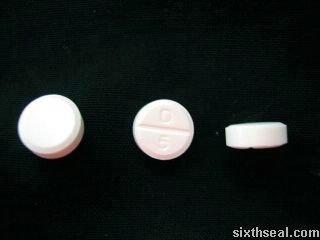 Anyway, I smoked a pack of Marlboros and still wanted more. I broke out my Nicorette Inhaler
[nicorette.com.au] and toked hard on that instead. That reminds me,
I’ll write about the Nicorette Inhaler some other time. It’s really
nifty. I had a bit of a panic attack when I couldn’t find the inhaler
stem though. I was all out of cigarettes and I had a craving from hell
and the inhaler was nowhere to be found! I practically overturned my
room and finally found it. Nothing has ever looked so beautiful before.
I smoked all the 4 remaining nicotine cartridges. I was still fiending
after that so I smoked half a cigarette that I used to mix with
cannabis. Ugh, stale. I usually smoke cannabis alone, but sometimes a
bit of tobacco makes it good as well.

Anyway, I called one of my good friends and talked to her for a long
time. We really connected too, it’s kinda like MDMA in that sense. I
also talked to someone I haven’t seen in 5 years and it was great! I
had a nice long chat with her about everything and made up for lost
time. I also got this bright idea to call fuzzy (Stephanie Goh)
[absolutely-fuzzy.com] in New Zealand. 🙂 Surprisingly, the rates to NZ
were much higher than to Malaysia for some reason. I’m in Australia if
you’re wondering. I could only talk for 15 minutes on an A$10 card. It
was the Super Saver Card.

I was lazy to go out so I called my friends to see if anyone had a
spare calling card. No one had any, but one of my friends picked me up
to get a calling card at 7-11. What a nice guy eh? Drove out just to
get me to the nearest 7-11 to grab a calling card. 🙂 The calling card
was It’s Green Card and I called Stephanie again and could also
only talk for 15 minutes. How strange, I’ve always thought NZ rates
were very, very low. Something like 3 cents a minute or something. What
is wrong with these cards? NZ is nearer and yet the per minute charges
were higher. 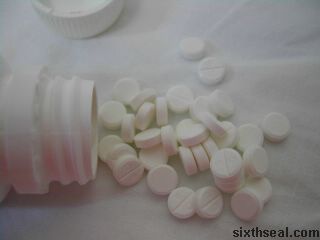 Well, Stephanie is a really nice girl and very easy to talk to. I
still think she speaks too fast though. 🙂 I’m glad I called her. She
was drinking coffee at home when I called. She’s one of those friendly
people that’s easy to talk to so that’s good coz I originally wanted to
call just to hear what her voice sounded like. Heh. We talked about
Wanganui and Melbourne and some other stuff. I also remembered
discussing raves vs clubs.

I can’t remember much though, I had too much clonazepam tablets in
the past few days and that totally negates short term memory.
Fortunately my long term memory was pretty much unaffected so words
like “Saddle”, “Lai Ming” and such were used in the conversation. 🙂

Anyway, over the course of the night I took 11 dextroamphetamine
tablets and insufflated 2 for a total of 13. The first dose was very
euphoric but boosting the dose didn’t really do much except prolong the
high. Don’t chase the high with this one. I’m feeling very scattered
towards the end and could hardly hold up my end of the conversation.
Uh, like all amphetamine type stimulants it shrunk my member to the
size of a pea and I found it very hard to take a piss too. It was all
good fun though. Dextroamphetamine is dangerous for me…I just like it
too much! I love stimulants in general. I’m going to make drugs a
weekend thing instead of a daily thing from now on. Gotta be careful
now.

Amphetamines are addictive for me coz I love their stimulating
effects so much so I have to be really careful with it. In fact, I’m
thinking about popping a couple right now. The bottle is just there
seducing me! Dammit, me and my poor self control with regards to drugs.
I’ll just settle for one last one before locking it into my desk. I
hate myself. 🙁 I haven’t eaten anything for two days too. Amphetamines
= appetite suppressant.

Amphetamine type stimulants are actually a really good way to diet.
It works through three ways – appetite supression, increased metabolism
and exercise. Exercise coz you feel like you gotta do something to keep
you busy. I’m not recommending this diet though, but I’ve used it
before and the results were shocking! I lost 15 kgs in a week after
daily use with minimal food (no appetite).

That is still within the safe range. I think.

Traveling at the Speed of Light

I’m feeling very scattered now. Good for going to a rave and really
caning it but not so good for doing work. I’ll take less next time.

Stimulants + no sleep + no food = crash

I’m not looking forward to tomorrow…

What’s the difference between doctors and drug dealers again? 😉

Caution:
Possessing this class of presciption drugs without a prescription will
get you arrested. Seriously, it’s heavily regulated and you need a
doctor’s script.

3 thoughts on “Dexedrine (dextroamphetamine sulfate) and fuzzy (not related)”

Leave a Reply to Larry the lad Cancel reply