This is the second one I ate. It’s called Cherry Guevara and it’s a word play on Ernesto Che Guevara (1928-1967)
[el-comandante.com] the revolutionary figure who became Minister for
Industry in Cuba in the 60s. He wrote the book Guerrilla Warfare and
was involved in the Cuban Missile Crisis as well. Hmm…a bit of a
history lesson going on here. 🙂 Anyway, the ice cream tasted really
good but the cherry taste is a bit strong. It tasted good because of
that anyway. 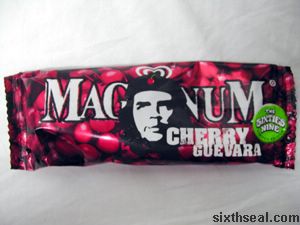 Lots and lots of cherries in the background and a black and white picture of Che Guevara. 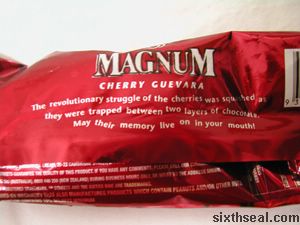 The revolutionary struggle of the cherries was squashed as they were
trapped between two layers of chocolate. May their memory live on in
your mouth! 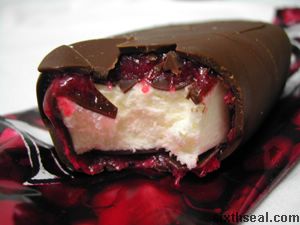 It’s plain vanilla ice cream but the cherry sauce was really strong
tasting and that made it taste good. Not making much sense here.
Yeah…the cherry sauce is between two layers of chocolate shells. Gives
it a bizarre effect and looks pretty. 🙂 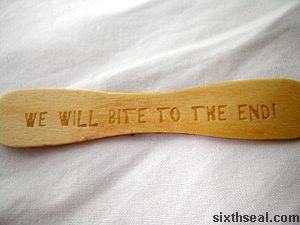 We will bite to the end!

Well, writing this with correct grammar and spelling and punctuation
took a lot of concentration and a lot of help from Microsoft Word.
Haha! Yes…a little personal joke there.