Just finished my tutorial. Posting this from the labs. I had an
early lecture today at Clayton. It was in one of the Law Faculty
lecture theatres and I was amazed to see that they have “waiting rooms”
in front of the lecture theatres. We do have something like that in the
Block B lecture theatres, but nothing on this scale. They had heaps of
seats and some of them are comfy ones like sofas. The lecture theatres
were in a semi-circle around the lecturer podium, quite a different
arrangement compared to other lecture theatres which are more like
movie theatres. Anyway, I found a bit of nice graffiti in the first
floor law building toilet: 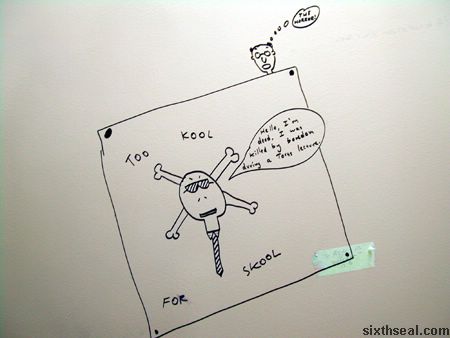 The speech bubble goes: “Hello, I’m dead. I was killed by boredom during a Torts lecture.”
The small thought bubble coming up of the guy popping up on top goes: “THE HORROR!”
The sides has TOO KOOL FOR SKOOL
The main feature is a light bulb (?) ending with a screw and sporting shades. There is a crossbones design at the back.

Well, the US has already dropped several bombs on the southern
no-fly zone, in the northwest, command and control sites and a missile
launcher. However, this is not considered the real attack. So what is
this then? A pre-emptive strike?