This is the last one in “The Sixties Nine” series. Choc Work Orange is based on the movie A Clockwork Orange
[imdb.com]. Boy, do I remember that movie. I watched the DVD for the
first time last year during one of my worst depressive episodes. I was
in the midst of a terrible depression with panic attacks and didn’t
even feel like doing anything. Slept most of the day away and didn’t
even want to do anything but forced myself to watch Band of Brothers
and Clockwork Orange while I tried to swallow the food I shovel food
into my mouth every night. The smell of lavender was somehow associated
to that period of depression too. That’s why I can’t stand all three of
those things anymore. I’m not talking about the “Damn…am I bummed today
or what” kind of depression but the crying-with-no-provocation,
suicidal thoughts, feeling of total helplessness and terrible
isolation, sleeping 18 hours a day and lying in bed for the remaining 6
hours kind. The serotonin imbalance kind of depression.

I wouldn’t wish that on my worst enemy. 🙂 Dark, dark days indeed. I
feared I would feel that way for the rest of my life! Good thing that I
didn’t get serotonin syndrome and my serotonin and dopamine
neurotransmitters were not permanently damaged and I was right as rain
again in 3 weeks. That was the crash from hell indeed. Worst ever. My,
how I’ve digressed. Anyway, if you haven’t watched this movie I would
seriously urge you to watch it. I was surprised they could get away
with those things 1970s films. Yes, the film was made in 1971 so I’m
scratching my head over how it got into “The Sixties Nine”. Lots of
graphic violence and rape and I still can’t get the image of Alex’s
eyes being forced open by metal clips while he’s made to watch
“corrective films”. That sucks…what a nasty flashback that brought me.
I’m pretty much desensitized to violence, and I don’t know whether it
was the way I was already feeling when I watched it or otherwise, but
this film seriously disturbed me. Anyway, I didn’t find the ice cream
that good coz I don’t like orange flavored stuff, except in orange
juice. It’s chocolate ice cream with an orange shell, but I swear the
ice cream must have had an orange flavor as well coz it was pretty
strong. Too…orangy for me, but if you like orange flavors this will be
good for you. 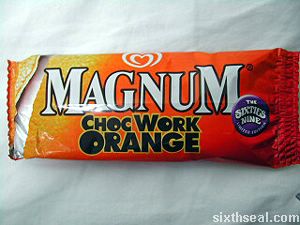 Orange theme with Choc Work Orange on it. 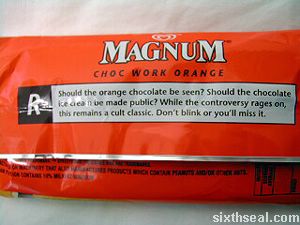 It has the R for Restricted film classification logo and then this:
Should the orange chocolate be seen? Should the chocolate ice cream be
made public? While the controversy rages on, this remains a cult
classic. Don’t blink or you’ll miss it. 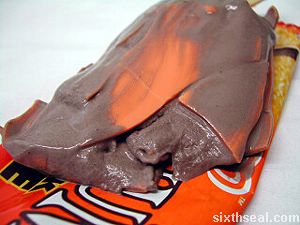 As you can see, it’s pretty mutilated. 🙂 I bought it at a Star Mart
and forgot about it for an hour and half. Thus, it was partially melted
and kinda broken. The shell was supposed to look orange and the ice
cream brown. 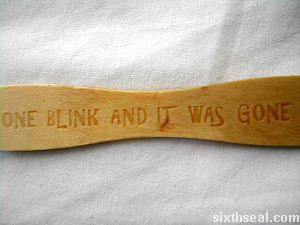 One Blink And It Was Gone.

That’s the last one. 🙂 To be honest, it’s too cold to be eating ice
creams today. I’ve eaten all 9 of them, I didn’t keep the wrappers but
I kept the sticks to mail off for their T-shirt offer. You get a
T-shirt for A$6.10 if you mail in all 9 sticks. It will take 28 days to
arrive but I’ll post it up when I get it. 9 ice creams in 5 days…that’s
more than I’ll usually eat in half a year! I hope I don’t turn into a
tub of lard like teddybwear [blogspot.com] said I would. =D

The world is as crazy as a clockwork orange.