Disclaimer: This post and all other drug related posts is made by veritas, who is a guest author on this blog. The owner of this domain is not responsible for the posts made by any guest authors. 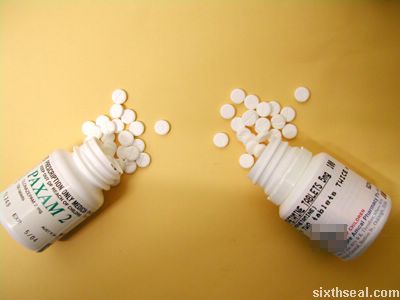 Today’s haul: Stimulants and tranquilizers in a single day. Hmm…both
of them are white tablets, I hope I don’t mix them up when I put them
back. Taking dexamphetamine when you’re expecting a benzodiazepine or
vice versa would be unfortunate indeed.

I had a successful run today. 🙂 I got 100 x 2 mg Paxam (clonazepam)
and 100 x 5 mg dexamphetamine tablets. The first visit was to the Benzo Messiah
[sixthseal.com], where I claimed that the “pills didn’t feel right and
I found out that I was actually taking 2 mg ones instead of 0.5 mg
ones”. Guess what the doctor said? He just said okay, and took out his
script pad! Amazing. You know what’s even more amazing? He said:

“So what was it you were taking again? Xanax?”

My mind went into overdrive. Here’s what my thought process was:

Xanax!
100 x 2 mg of Xanax!
200 mg of Xanax! Say Yes, for Christ’s sake, say Yes!
But wait…I need Klonopin to sleep after a dexamphetamine run…clonazepam makes me sleep but alprazolam doesn’t.
Stupid! Xanax is much more euphoric! Say YES!
Yeah, it’s more euphoric, but it doesn’t make me sleepy. How will I manage amphetamine comedowns?
It’s Xanax! The doctor is offering to script you 100 x 2 mg Xanax bars! Have you finally tweaked yourself stupid???
But 200 mg of Xanax…I’m not sure I’m responsible enough to handle that. Xanax withdrawal is hell.
Who cares? Euphoria buddy, fucking euphoria…couple of beers,
couple of Xanax bars, couple of bowls of weed…think man, think about
the fun times!
Hmm…
Say Yes
Hmm…

(all this happened in milliseconds)

“Nah, it was clonazepam”, I said 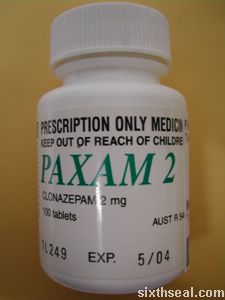 It’s true that Xanax (alprazolam) is much more euphoric than
Klonopin (clonazepam) but I’ve learnt to respect Xanax after taking up
to 5 mg daily with alcohol during my last holiday. Benzodiazepine
withdrawals are bad, especially with Xanax since it has such a short
half life. Just one month of daily use fucked me up for days when I
stopped. I can’t even imagine how bad it is for people who’ve used it
at higher doses and longer periods of times. I have a good friend who’s
on it for years (legitimate prescription for anxiety and panic attacks)
and I can’t even imagine how bad the withdrawal would be for her when
she wants to taper off.

Well, those of you who’ve taken benzos regularly at high doses for
prolonged periods and then stop suddenly know what I’m taking about.
It’s hard to explain benzo withdrawals to the uninitiated. There’s the
ultra-heightened anxiety and recurring obsessive thoughts and panic
attacks. There’s also the possibility of seizures if you’ve been on it
long enough, but that usually take months or years of heavy use. It’s a
wonder that a legitimate pharmaceutical drug produces worse physical
and psychological withdrawals than most illegal drugs. I don’t trust
myself with 200 mg of Xanax, so that’s why I told the truth and said it
was clonazepam. 🙂 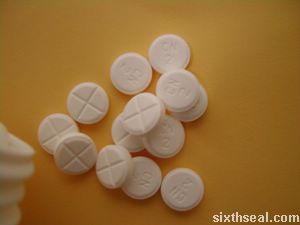 The 2 mg clonazepam tablets are white, with “CN2” imprinted on the front, and a dual score at the back

“Okay”, went the good doctor and scripted me and I was out within 2
minutes. 200 mg of clonazepam can cause a lot of trouble too, but I’m
not going to take it daily, my new policy is for it to be a weekend
thing when drinking or for comedowns only.

All hail the Benzo Messiah!

The next trip was to Doctor Dexamphetamine. Very hassle free as
well. I haven’t told you the story behind this, so I’ll give you an
abbreviated version now about what happened last time. Basically, I
just went in and claimed I have been on Dexedrine (a brand name of
dexamphetamine) since I was 19. I didn’t say dexamphetamine because I
wanted to avoid using the word ‘amphetamine’. 🙂

If you’re wondering what dexamphetamine is and why it’s so good,
it’s because it’s speed. Legally prescribed speed. 🙂 This is the same
thing you get off the streets in the form of powder and pills (like
some of the feng tau yuen pills that makes you unable to sleep, though
that can contain either methamphetamine or amphetamine) and it’s pure
and clean because it’s made by a pharmaceutical company instead of a
dodgy chemist. 😉 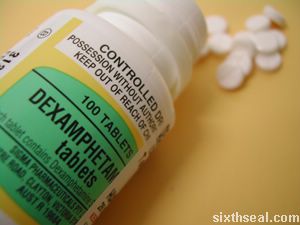 Made very locally by Sigma Pharmaceuticals at 1408, Center
Road, Clayton (!) I’ve seen their production facility before too. Won’t
I love to go on a tour of their labs.

Anyway, I’m digressing, this is what I told the doctor the first time I went there:

I said I was diagnosed with narcolepsy (it’s a condition where you
suddenly fall asleep, occasional temporary paralysis etc) and excessive
daytime sleepiness and I was prescribed dexamphetamine to manage that.
I told him I usually get my script filled in Malaysia and bring enough
for the whole semester, but unfortunately customs confisticated my
stash because I didn’t have an Australian doctor’s prescription.

The doctor considered my story and then decided I was telling the
truth. 🙂 It really helped that I looked half asleep that day. I didn’t
get much sleep the night before in anticipation for that. I told him
that I thought I could do without it, but it’s really affecting my
studies and I’ve been sleeping 14 hour days and falling asleep in
lectures etc. He asked me what my symptoms were, which of course I knew
because I’ve been reading up on narcolepsy. I never forget the mantra: Always do your research! 😉 He scripted me 100 x 5 mg dexamphetamine tablets and off I went.

That was about a month ago. I went back again today and the doctor
just wrote me a script without any hassles, though he did a bit of
calculation in his head to see if I was due for the script. 🙂 He went,
“Yeah it’s been 25 days”. I tentatively asked if it was wise to
increase the dosage, which was a mistake, because I was hit with a
barrage of questions after that. 🙂

He asked me a lot of questions about why I wanted do that. I said I
was still feeling sleepy at times and he re-asked me my symptoms on
narcolepsy which I thankfully managed to answer despite being partially
memory-incapacitated from my heavy benzo use these couple of days.
Anyway, he didn’t get suspicious, thank God for that! You hear me God?
Thanks for that, I owe you one buddy! 🙂 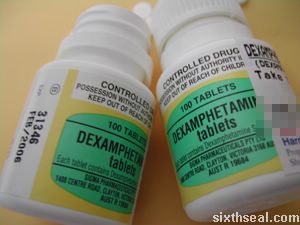 How I wish both bottles were full instead of just one

Anyway, he wrote me a script and asked me how much it costs. It’s
A$30.35 for 100 tablets and the doctor said it’s expensive and asked me
how much it cost in Malaysia. I was caught by surprise by the
unexpected question, and made up a figure. Sheesh, I should be more
prepared next time. Well, after thanking the doctor profusely (I think
I thanked him a little too profusely) I made my way to the pharmacy to
get my dex script filled.

Tell you a funny thing that happened there. I got my script filled
by the pharmacist and went to the counter to pay for it. The girl at
the counter, who’s about my age, took one look at the bottle and gave
me a grin and asked me what it’s for. I said it’s for my narcolepsy.
She went “Oh, that’s terrible” and gave me a huge grin. I think she
somehow knew I was a scripter. Instinct from a fellow scripter?

She asked me some questions about my ‘condition’ and made small talk
and was really friendly, all the time looking at the bottle lovingly.
After I paid, she gave me a knowing wink and said “Have a nice day”. I
didn’t wink back because this is after all a pharmacy and even though
the cashier isn’t the pharmacist and is just working there, being
indiscreet might jeopardize my scripting activities. I just smiled and
said “You have a nice day too”. She knew what was going on though. For some reason, she just knew. Heh. 🙂

Well there I go again with my verbal diarrhea. You know I’m tweaking
when I go on like that. 🙂 It’s like dexamphetamine is my muse and I
use it to complete assignments and work too. I think some form of
psychological dependence is happening here. I’ll be careful though, so
don’t worry about me. 🙂

Link of the Day: Iraq’s WMD: How Big a Threat? [time.com]

Excerpt:
He added that Iraq’s exotic weapons programs also involved the use
of psycho-tropic agents similar to LSD. “They were not meant to kill,
just incapacitate, confuse,” says the inspector.

Book me a plane ticket to Iraq straight away! 😉