It’s only 6 weeks before my graduation so I’ve started to take
photos of anything and everything in an effort to document scenes of
Melbourne that has been part of my life ever since I arrived here in
2000. I’m starting with the basics – campus and halls then moving to do
photo shoots of the city and other places. Here’s one I took today on
the train, I was sitting in the first carriage and just shooting random
pics of the train interior when I saw this: 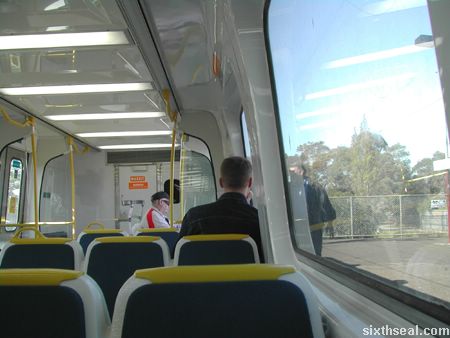 No, not the guy in front of the photo. I’m referring to the train
driver helping a physically challenged guy on an motorised wheelchair
to exit the carriage. I found this photo nice, because it showcases the
level of service available for the physically disadvantaged here. Train
drivers will stop and come out of the driver compartment and come into
the carriage to help them enter and exit. I’ve been impressed by the
allowances this country makes for the physically challenged ever since
I was here.

Infected Mushroom! If you don’t know who they are, kindly disregard the next paragraph and continue reading from the one after.

Heresy! Go back and listen to your Paul Oakenfold and Paul Van Dyk. That’s what trance means to you anyway. :p

If you read that anyway, you have my apologies for the unacceptable
elitist insult. 😉 I was impressed by their intense psy-trance when I
was introduced to their music and I had wanted to see them live ever
since. I want to go so much…but I can’t. Unfortunately my plans of
working ahead to have an Easter break totally free from assignments has
not gone according to schedule. There are just too many assignments to
complete and I need to catch up over Easter break. Why can’t I take a
single night off to go?

Well, because if I go, it’s not going to just affect one night, I’ll
need at least a week to recover. Why? Because if I go, I just know I’m gonna go all out
by justifying it’s the last big one before I go back, so I’m going to
be pushing the limits, fuck the consequences, going out with a bang and
that. And the thought of me contemplating “going all out” scares me too
coz in my dictionary:

going all out
phrase
1. Mental state where excess is celebrated and consequences are not taken into consideration.
2. Implicitly trusting your body to handle and deal with the strain
exerted by the prodigious consumption of various supplements.
3. Living only for the “now”.

I’ve also noticed that every time I decide to go all out something
bad happens at the end which more often than not causes regret or
remorse. =D I trust myself not to do anything too stupid and reckless
that will lead to long lasting repercussions, but still the recovery
period from my sessions of going all out (in this context) takes a
week. One week of (horrible) depression, overwhelming anxiety, panic
attacks, unshakable lethargy, mood swings, suicidal tendencies, crying
spells and utter helplessness before the dopamine and serotonin stores
starts grudgingly filling up again.

There was a time in my life when I would have said “fuck it” and went all out, quad-dropping* and candyflipping*
every few hours and get totally mashed and HAVE FUN till the break of
dawn. Unfortunately, I seem to have sobered up and realized the
importance of not fucking up this semester, because it’s my last
semester and I’m graduating in June. I want to spend my Easter break
catching up and finishing assignments and doing some photo shoots
instead of lying in bed depressed and feeling like a significant chuck
of my brain has taken leave.

That doesn’t mean I don’t want to go though. This is probably the
last big event that’s happening before I go back, and Infected
Mushroom!!! It’ll be absolutely crazy in there, I want to go! I can’t imagine what a powerful experience it’ll be to be candyflipping*
while listening to Infected Mushroom live in a “psychedelic mad house
featuring multiple monster lasers, death defying stunts, mind bending
installations + more”.

*I don’t do any of these things, mind you, it’s just an
analogy. I don’t even know what it means! It’s not to be taken
literally. 😉

It will be a total mind-fuck. I want to be there! But I
can’t. Our one week long Easter break has got to be used for catching
up and assignments instead of recovering. Thus, I’m afraid I’ll have to
ban everyone from mentioning the words “infected” and “mushroom” in
front of me, in my near vicinity, within hearing range, or in the
comments. This is because I don’t want to be reminded of what I’m
missing. 🙁 Those who insist on defying this ban will receive a hefty
kick in the balls. That goes the same for girls, I’m sure it’s gonna
hurt too. =D

I’m serious, no one use the words “infected” and “mushroom” until tomorrow, when the event is over.