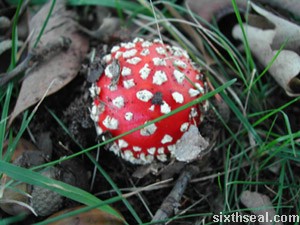 Amanita muscaria (Fly Agaric). I’ve never had this mushroom before,
they’re different from magic mushrooms, as the primary content of
amanita muscaria is muscimol and ibotenic acid (which gets converted to
muscimol by the body). Read more about amanitas here
[erowid.org]. I had 6.5 grams of prepared (baked caps and dried skins)
amanita muscaria courtesy of chemist_tip. Thanks buddy! I’m writing
this now at T +7 hours +. I consumed the amanitas at 5 pm and the trip
is wearing off now, but the after effects are still felt, still a bit
confused. 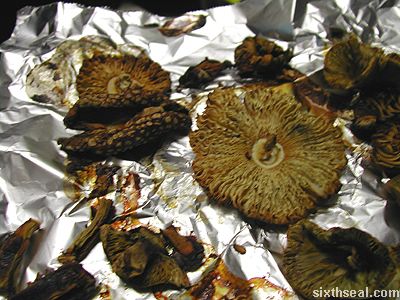 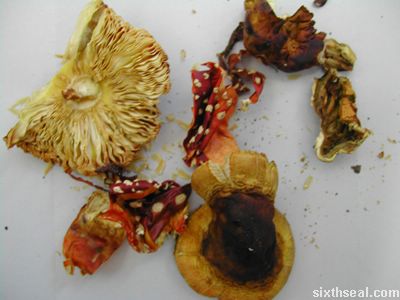 6.5 grams of baked caps and (peeled) dried cap skins of amanita muscaria. I ate everything in this picture. Mmm…

The amanitas I consumed are a mix of all caps (baked) and the skin
(just dried) on an empty stomach. I ate them as is, they taste
wonderful, baking adds a lot to the flavor! There was a nice “french
fries” taste to the baked caps and the dried skins tastes good too –
mushroomy taste, like shitake mushrooms actually. Hmm…I think I’m
repeating some stuff that’s already in the trip log, so I’ll just paste
that here in its original and unedited form (beware typos):

If you’re not interested in reading the trip report, scroll down
to the end if you’ll like to see a picture of drying peeled cap skins.

5:40
was getting slightly sleepy without realizing it. and i’ve read about
the nausea, but god, i didn’t know it was this bad. it just suddenly
started. the nausea i mean. not eating for 17 hour beforhand is prob a
mistake. ugh, the nausea is really bad, like the ones you get on third
plateu dxm doses. feel an urge to throw up, and i’m very dizzy too.
damn. the feeling is like the nausea and diziness you get after smoking
wayyyy to many cigarretes. gonna lie down for a while.

just got up to tell you all VERY DIZZY and i notice the saliva
effects too. i’m also think i’m getting gastric coz of the way my
stomach is churning.salavating more than usual even before drinking
water.

i felll askeep just now and suddendly wope up beofre 10. i don’t
rememembre dreaming or taking the mushrooms and just sat up for almost
5 minutes there not knowking anything. i didn’t realise i was inder the
influence until i knoticed i was repepating “shut now” and” ‘recipient”
while looking back and forth at two nacent peoole. i know the pic are
thise them byt sge looke anyway, so there’s like three google for 3 pll
to “go for it” and “recipent”/

its hard to type.i saw that my hard of view is sharrting to get hard
now. when i see a line it rend tosee another like with the “comp”
“abuse” words. damn i didn’t reliuase but talkimg will be hard on this
one,the visual field is too fast for me fo one thint. when i look left
ahright as the keyboard once, it’s like “helllo nad tkae care”

sorry, tellying is hardf since i’mt thinkbg one character bakc is
correct/i keepm moving my head to the northwest.i can tell i’m very
under the influnce.it was go keep going northwest. keeps on upperright
uppperright and hehe oops i thought my digicam was my mouse, i kep
themside by sode controlled with a lit of effects but it does keep
shiny and i have be my on my toes all the time. yep, lazy to correct
the typos too.

walkked to the toilet just nopw and realized my motor skills isn’t
as stable as i thought it was. fell down while putting on toilet
slippers. things are strange too, found mysefl very open to any
suggestions, can be quite a dangerous drug in this context. and now my
head heard this it keeps wanting to lean to the left and grabbed my
mouse receptor instead of my mouse.

i think amanita is clear for me. i have no “mental noise”, totally
silent for the occational “all clear” that its repeating now. it can
repeat anything too, but just one phase. I notice it went “boom, boom
boom” just now, but otherwise the mental clarity is good,. i don’t
think i can talk properfly though but i can try if confronted.

the effects are mainly mental. the only “visuals” i saw was a very
fast moving field of vision. you dunno how hard it was to type those
few words. my brain keeps repeating “television” and another phrase i
forgot to comfuse me. it wanted me to help something else, i think. oh
i rememeber now! it was “help” my brain keeeps repeating “help” in a
male voice like someone is in trouble. the vouce sounds middle aged,
caucasian, and weakening, like he’s drownking (not in water) in
something like weak sand. quicksand i mean.

ah i can see i’m confusing you too. anyway, i was just talkking
about a filed of vision who like to instist going “went of form” come
her” to eat oothter ahd i looked back and forth even thought I’m
tyoping now. strabge, 🙂 ate a time tam. wasn’t aware of the taste at
first but its great now. at firt duriring the crunching stage, it feels
large and volimuniis in my mouth, but tasted dry, there wasn’t any
taste until a movied it back a bit towards by throat. then the nice
taste came. i just notice i dropped a piece of chocolate on my hard and
i was surprised at this new brown bit on my left hand. i was thinking
is it a bug that landed on my hand or did i grow a new strange brown
wart?

Its not the first nor the seond but i didn’t want to eat the small
bit after i made the bug association. ah, now you scared me a bit.i
don’t like bugs and i subconsiouly shuddered a littke as i bruch it
offed. damn. heh. surprised myself that i should shudder even know my
mind knows that its obviously not some bug but a piece of chocolate.

oh i just noticed that i was doing minor twitching tooo. little
things i can’t control like my right hand twiched a acouple of seconds
ago. which is strange (damn my brain insisted on writing “why” as
strange” but i won) because i had a couple of klonopins – clonazepam
(not only a benzo but an enti epilepsy medication because it supresses
epileptic fits) with beer last nite (or early this morning) while
coming down off meth so i should still be feeling it now.

it feels like dxm too, kinda “dissociative like”. funny. i’m going to smoke some weed and eat some food now.

i don’t know why but it seems that i like to wave now. like move to
side to side.. oh damn i lost a bit of infor by not saving. btw, i
haven’t eaten, walking feels unsteady right now, will try again later.

short term memory is either affected or overrided by some other
effect. can’t do stuff quickly. wanted to resize the amanita pics and
took ages. keep going to wrong folders that seemed “right”. keep going
to wrong menus that seemed “wrong”. sometimes i even know they’re wronf
before clicking the folders and yet my hand goes to click it. what a
paradox!

yeah it things can be quite blur. trying to do things is hard since
your mind seems to have a mind of its own and want to do other things.
so you end up doing things that was not what you wanted. this is like
picking up wrong things – want to pick up keys, pick up fan instead,
really strange stuff. hmm…

12:00 am
feeling a return to baseline. aftereffects still present but not
tripping anymore. its been 7 hours since ingestion. lasted fairly long,
nice, considering shrooms just lasted 3 hours that time. mushies
effects are better though. 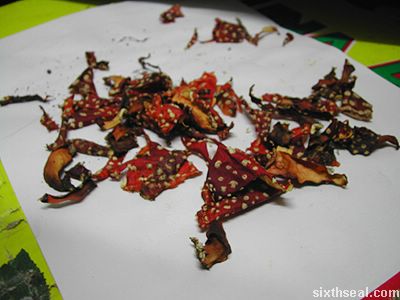 My personal experience today did not find anything extremally
noteworthy about amanita muscaria. It does feel (caught myself spelling
“fill” twice) interesting, but there’s no real visuals associated with
it besides the “everything is moving fast, the world has a fast
framerate” feeling. As you can see, I accidentally fell asleep in the
early stages of the trip. I may have slept though the peak, but I’m
under the impression that sleeping the first phase (sedating phase) off
is common and people will automatically waking up during the
stimulating/psychedelic phase. Personally, I did suddenly wake up for
no reason and was disoriented for a while before remembering the
amanitas I had previously consumed. I sat there for 5 minutes wondering
why I’m feeling weird without realizing that I was under the influence
coz I forgot all about amanitas. 🙂

I do appreciate this experience though, I like trying new things and
amanita muscaria’s effects are interesting. It’s markedly different
from a magic mushroom trip, which is understandable as the contents are
totally different. The experience sure is different from any substance
I’ve tried before, although comparisons can be made – a cross between
(magic mushrooms(psilocybin)/LSD – part of these effects are present) /
(DXM/ketamine – slightly disassociative) / (benzodiazepines – memory
problems). That doesn’t do it justice though, the effects are different
from anything I’ve tried before and I found the trip just plain weird
because of the strange effects. Eh, I’m still a little confused now,
would have been better to write this tomorrow, but I feel like getting
it done today. 🙂

I would try it again at a higher dose, it’s quite interesting, not
“noteworthy interesting” but “interesting interesting”. Certainly worth
a second trip, and I’ll stay awake during the sedative stage next time
to see if there’s anything interesting in there. The nausea is really
bad for me though, I’ll make it a point to smoke cannabis during the
trip next time, I didn’t want to “cloud” my experience today so I
didn’t. I prefer to try substances I’m new to on it’s own the first
time. My apologies for all the typos and confusing statements in this
post, I’m still feeling the mild aftereffects even after 7 hours 41
minutes. Oh, and I changed the POTD to one of amanita muscaria to honor
my first experience with this nice mushroom. 🙂