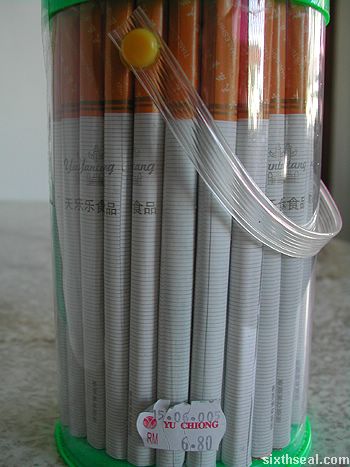 Pictured above is a round container full of candy cigarettes. I
found this at the local grocery shop while getting some snacks. I
remember those candy cigarettes they used to sell at the shop outside
my primary school – they look like real cigarettes (the length is
similar anyway, unlike these ones) but it’s actually chewing gum. It
caught on in our class and it’s not uncommon to see people playing with
the chewing gum “cigarettes” for a long time before actually eating it.
It was quite the thing to pretend to puff at the cigarette, emulating
“adults”, playing grown up. I was either in Primary 2 or 3 (age 8-9)
and I never took part in this as my parents frowned at the concept of
marketing candy cigarette look-alikes to children. I did eat a quite a
few of those though, at my discretion. 😉 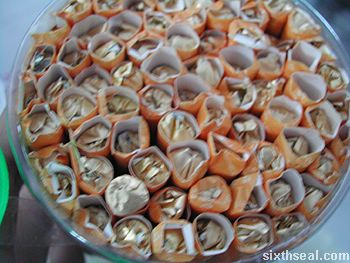 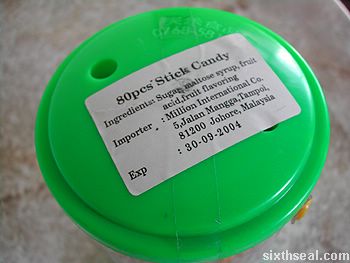 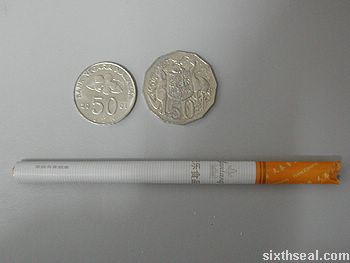 Anyway, I saw this again today and it was much longer than the
chewing gum cigarettes from my youth, but it looked similar, so I got a
box of it. It does look remarkably like a real cigarette – brown filter
with white writing (looks like the specks of white on the filter of
some cigarettes), brand name on the top of the cigarette (it has a
picture of a pagoda and says “Yantang” – tang is candy, I’m not sure what yan
in this context means) and a long white cigarette complete with “burn
lines” (I don’t know what it’s actually called, it’s those circular
lines at regular intervals on a cigarette to help it burn evenly). Very
impressive. 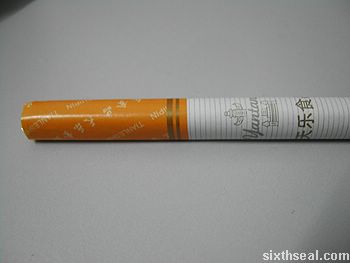 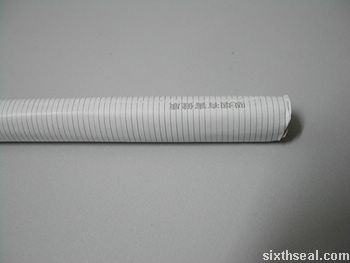 It isn’t the chewing gum I expected though. This one is filled with
this fruity tasting round pieces of candy. It’s loaded back to back so
there’s quite a few inside the long candy cigarette. The length is
approximately similar to two regular (King Size) cigarettes or 1 1/2
100’s. The candy tastes pretty good too – fruity! 🙂 It’s not bad for
the price – 80 sticks for RM 6.80 (A$ 3.40), so that’s about 8.5 cents
(A$ 0.04) for each one. It’s also convenient, you don’t have to unwrap
the whole thing, just the top (either end would do). If you want more,
it’s a simple matter of turning it upside down and giving it a little
tap, and the rest comes sliding down through the open end. 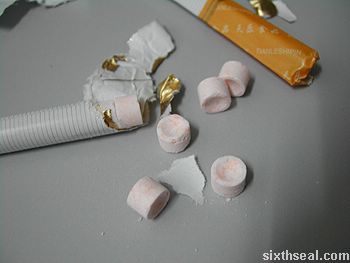 I happened to see another type of cigarette candy – this one even
had a quasi burning tip, all the better for children (I assume it’s
marketed to that demographic) to play “I’m smoking”. Cigarette candy #2
is shorter than cigarette candy #1 and I don’t think it contains the
same thing. I gave it a bit of a shake and it sounds like it’s filled
with those fizzy tiny crystal thingies that fizz in your mouth, so I
gave it a pass. I did take a photo in the grocery shop though, here it
is: 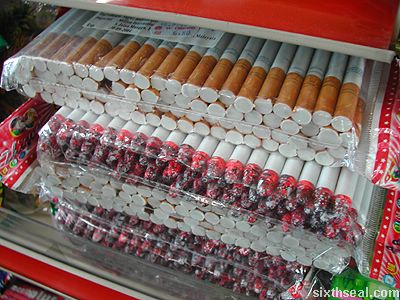 Note the glowing tip, a bit too realistic eh? I would have thought
that with the strict guidelines about cigarette advertisements in
Malaysia, someone would have lobbied the government to stop sales of
cigarette look-alike candies to children. “Oh, won’t someone think of
the poor children” or something. Anyway, I’ll leave the issue of
whether this leads to increased rates of smoking to scientifically
conducted surveys, but personally I think it’s just a bit of harmless
fun for the children. However, I did start smoking when I was 16
though, so hmm…;)

Anyway, on a related matter, it’s funny what you can find under
(inside – not below it, the folds behind and inside) the couch. My
girlfriend dropped the candy down the couch (our term when this happens
is “The couch ate it”) and I had to dig around (not a pleasant task) to
find it and guess what I found? 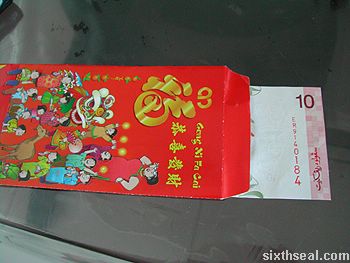 An ang pow with RM 10 inside. Ang pow = red packet, literally. It’s
an envelope filled with money to be given to guests and unmarried
relatives during Chinese (Lunar) New Year. That was in January, so
yeah, it was a bit funny to find one in July. 🙂 My pet theory is
someone accidentally dropped it down the couch and couldn’t find it so
they didn’t bother and it only got discovered today. 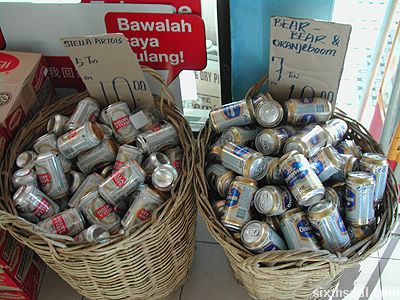 Bawalah saya pulang – bring me back.

Anyway, onto another matter, I found this great deal at the local
grocery shop again – 7 tins of beer for only RM 10! RM 10 = A$ 5. No
catch, the beer’s use by date is June 2004 and it tastes perfectly
fine. It’s Oranjeboom, a beer I haven’t heard of, but it’s imported
from Holland. It’s a lager, but it’s a bit too “watered down” for my
tastes. Don’t get me wrong, I don’t care what I drink, I’m not a choosy
drinker, if it’s beer and it’s cold, I’ll drink it. Heck, I’ll even
consider drinking it if it’s warm. 😉 Just passing on my tasting notes
here…this one has the standard 5% alcohol, so it’s not too bad,
especially for a can of beer that only costs slightly over RM 1.40 (A$
0.70) per can! That’s a very good price in Malaysia. 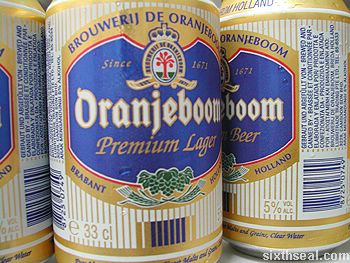 On a somewhat related note, when I was about 10 years old, another
local grocery shop (now defunct) was selling whisky (!) in small
pre-packed plastic bags for RM 0.50 (A$ 0.25) and they stock that NEXT
to the candy and chocolates! I was having private tuition at the school
above that shop and that was like the Holy Grail, since I had asked my
father what it was last time and his answer only instigated my
curiosity. Naturally, he told me never to buy that, but one day after
my tuition, I did just that. I handed over my 50 cents pocket money and
bought the whisky in a small vacuum sealed plastic bag. The cashier
didn’t even blink because it’s quite common in a small town (at that
time) for kids to buy cigarettes/beer for their parents while they wait
in the car. With trembling hands, I ran to the back of the building
(where it was secluded) and bit into the FORBIDDEN FRUIT. I gave it two
small swallows before retching and throwing the rest of it away in a
drain. I didn’t remember feeling drunk, although I was a bit dizzy and
I was guilty and worried that my act of curiousity would be discovered,
but it never was. It’s worthy to mention that the product (whisky in
plastic bags) was recalled from sale after complaints from many
parents. There you go, an anecdote from my past. 🙂