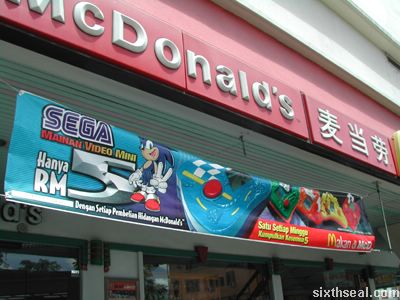 I went to McDonald’s for lunch today. I wanted to get those Sega
mini handheld games they’re having a promotion on – RM 5 (A$ 2.50) for
each one with the purchase of a meal. Unfortunately this is what we saw
upon arrival: 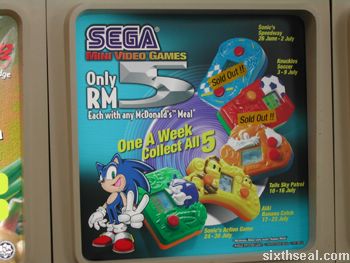 There goes my hope of getting every one in the collection. 🙂
Hmm…come to think of it, if anyone happens to have a spare one that’s
still inside the shrink wrap, I’ll be more than happy to get it off
you, email me and name a price. Well, we had lunch anyway since we were already there. 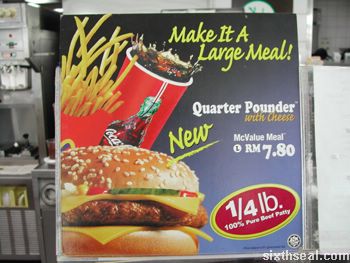 I had the Quarter Pounder with Cheese meal while my girlfriend had
the Spicy Chicken McDeluxe meal. It seems that the Quarter Pounder has
finally arrived (it says “New” on the menu anyway) and I haven’t seen
it the last time I was back home. I also asked the girl behind the
counter about the mini handheld games and she said they get sold out on
first day they’re available, so I guess I’ll have to queue up before
opening hours on Thursday. It’s not like I have much to do until my
results come out on the 17th of July anyway. 🙂 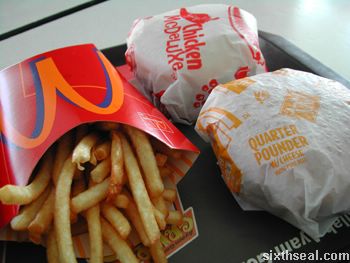 Anyway, the Quarter Pounder here is pretty sad…they are still using
the standard size buns, so the meat patty was visibly overflowing from
the bun’s edges. It tastes pretty much the same though, except for the
over mustard-ization of this one. Unfortunately, the fries here are
still very dismal. I have eaten at McDonald’s (and other fast food
joints) in Malaysia (various states), Singapore, Indonesia, New Zealand
and Australia and no one came even close to the QUALITY fries in
Australia’s McDonald’s (though Singapore’s shaker fries at McD’s gave
it a run for it’s money). I don’t know about the other states, since
I’ve only eaten at McDonald’s in Victoria and New South Wales, but
damn, the McDonald’s fries in Australia is absolutely melt in your
mouth delicious. The fries of the McDonald’s in Malaysia tastes like
the ones in Burger King/Hungry Jack’s in Australia – very unremarkable.
😉 While we’re on the topic of fries, I’ve also eaten the most obscene
ones in Australia – at KFC’s, which is why I can count the number of
times I’ve eaten at Kentucky Fried Chicken in Melbourne over a three
year period on the digits of one hand. I would have gone to a fish and
chips shop instead if I wanted fries of that size and girth.

Well, on another topic, I saw a group photo of the candidates and
photographers from the Miss Photogenic photo shoot yesterday in Sin
Chew Daily, a local Chinese newspaper. It was on the top of Page 8 of
today’s edition, which I’ve scanned here:

I can’t translate the captions because I can’t read the language,
sorry. I can speak it fluently though (this is something I always feel
the need to add). Anyway, I’m the second one from the right in the
photographers group photo. The one in a t-shirt and slacks, biting my
lower lip like I always do while on stimulants. Gotta have something to
keep me awake at that ungodly hour. Of course, when I say stimulants it always means caffeine or another legal substance, while when veritas says stimulants it’s probably something else – can’t be too careful when I’m in Malaysia. 😉

Which reminds me, don’t call my cell phone number asking for drugs,
I’m not a dealer. I don’t mean to be rude or anything, it’s just that I
can’t sort you out, so you’re wasting your time. I also have to add
that there are two authors on this blog, the Digi number in one
of the posts below is mine, and I put that up for friends and/or
important matters. To the girl from KL who called this afternoon, what
I’ve told you on the phone is correct, please don’t comment about
anything here as this is a publicly viewable medium. This goes for
everyone who has privileged information as well. Thanks! 🙂 My
apologies if I come off as being discourteous, again, I don’t mean to
be rude.

Anyway, here’s two views from inside McDonald’s in Sibu: 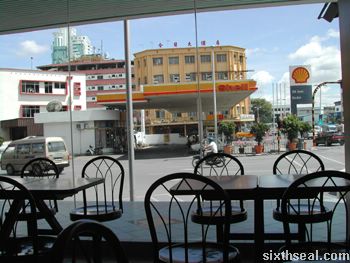 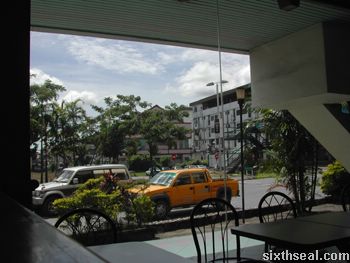 Thanks to Haggas for pointing this out. Very, very interesting read about a study on the use of amphetamines in enhancing learning.

64 thoughts on “McDonald’s (Sibu), grainy B&W photo in ze papers and NO DRUGS!”