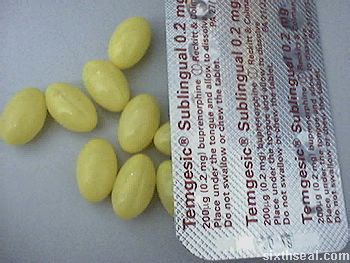 Normison 20 mg capsules
This is temazepam in liquid form inside a gel capsule. It costs RM 2
(A$ 1) for each capsule. It’s a benzodiazepine, but not a very strong
one. 20 mg temazepam = 10 mg diazepam = 0.5 mg alprazolam, so it’s not
cost effective either, considering 10 mg of diazepam goes for half that
price. The best bang for the buck is still alprazolam (Xanax) though,
that’s RM 1 (A$ 0.50) for a 1 mg tablet, but let’s not talk about
benzos while I’m tapering off from them. 🙂 Anyway, there have been
reports of heroin users injecting this (liquid temazepam capsules)
during the heroin drought a couple of years ago in Australia. Don’t do
it unless you want to look like this [drugs.vic.gov.au]. 😉

Temgesic sublingual 0.2 mg tablets
This is 0.2 mg buprenorphine tablets, a mixed opiate
agonist/antagonist. It costs RM 20 (A$ 10) for a blister pack of 10 x
0.2 mg tablets. Due to its water soluble properties, people have also
been injecting this, which is not the wisest thing to do in the world.
There have been reports of success with insufflating (snorting)
buprenorphine, and IMHO that would be a safer method, if you want to go
against the prescribed route of administration (letting it dissolve
under your tongue). Needless to say, if you’re dependant on opiates,
the antagonist properties will make you go into withdrawal, but if
you’re not, it is a recreational drug.

Disclaimer: To protect myself, I only post AFTER the abovementioned substances are no longer
in my possession. In other words, this did not happen today. 🙂 It
would be obvious to frequent readers anyway, since I mentioned I’m
tapering off benzos. These two are part of the group of reviews in the
backburner – stuff I’ve consumed long ago, but haven’t gotten around to
writing about yet. A more detailed experience report would be
forthcoming.